The Chicago born, self-taught artist, designer, photographer, and creative director NoPattern (Chuck Anderson) has announced his largest solo body of work, a collection of 99 NFTs, called INFINITE PRESSURE, to be revealed on 31st March in collaboration with  NFT platform Chain/Saw.

INFINITE PRESSUREis a body work that explores the confluence of technological chance and human decision-making within my practice. Ultimately INFINITE PRESSURE is about exploring boundaries and limitations in a world where there are none, trying to answer the question “Where does the machine end and the human begin?”

“As many artists do, I’ve always wrestled with the question. How do you know when a work is done?” We are living through a new creative age where endless possibilities are celebrated. Technology is now such that there is virtually no circumstance where creating and sharing work is hindered. The future is here. The infinite has arrived, but as a result the pressure has intensified: to create, to share, to build community, to never stop. These themes permeate INFINITE PRESSURE from top to bottom in my quest for self-imposed guardrails, questioning what qualifies a work to exist within the collection, letting go for the sake of collaboration, and striving to fully exhaust my canvas, my GPU, my software, and for better or worse, myself.”

Heavily influenced by the premise & aesthetics of generative art yet not in fact generative at all, the works are comprised of tens of thousands of vector shapes extracted from my photography, blended along hand-drawn bezier curves in Adobe Illustrator. The result is the digital, vector equivalent of throwing paint at a wall which is then recomposed by hand, resulting in maximal compositions that are objectively random yet decidedly human. Finished works range from organized and serene to complete and total havoc, a testament to my penchant for visual miscellany.

Color plays an important role, sometimes muted or monochromatic to soften an otherwise hectic composition, other times displaying a full spectrum to add to the chaos. Inky porcelain blues, obsidian triple black, rainbows on steroids: virtually every palette imaginable is present somewhere within the collection.

Established in 2004 at the age of 18, NoPattern Studio is the Chicago-based practice of self-taught artist, designer, photographer, and creative director Chuck Anderson. Forgoing formal education after graduating high school in 2003, Anderson built a career and recognizable artistic practice. Known for his surreal use of color and light, pioneering juxtapositions of traditional & digital mediums, and endless experimentation, Chuck’s work has become highly sought-after by a wide spectrum of brands and collectors.

Chuck has been a pioneering and well-respected voice of creative and internet culture since the early 2000s. As one of the founders of early internet blog THE BRILLIANCE! alongside designer Benjamin Edgar and the late Virgil Abloh, Chuck has been championing all things creative for nearly two decades.

Chuck started to explore the NFT space in 2021 when he minted his piece Places You Can’t Imagine. For years, it was widely circulated on the internet, leaving him often uncredited. With the emergence of NFTs in 2021, it allowed him to regain ownership of the piece and really start to delve into the exploration of his own personal work. Chuck’s exploration of NFTs and Web 3.0, led him to become an active part of the DAO known as Friends With Benefits, as both part of the curation team as well as the regular host of an artist interview show.

Chuck’s own practice has also significantly evolved, shifting from a majority of client work & commissions to his own self-initiated endeavors within the NFT space. His NFTs have been acquired by some of the most prominent collectors in the space. 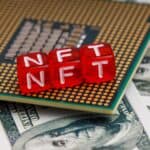