Paintings on the Radio - FAD Magazine
Skip to content

It may not sound logical, but not only are there many interesting podcasts that talk to artists, but radio can work well in the discussion of individual works of art. Two series doing just that are available on Radio 4 at the moment:

For Viewfinders: Ways of Seeing at 50 (broadcast last week, available on iPlayer) five writers talk about works of art, referring as they do so to John Berger’s seminal 1972 TV series ‘Ways of Seeing’ and its accompanying book to mark its 50th anniversary. Olivia Laing, for example, talks about a painting by Giovanni di Paolo in the National Gallery. As she points out, the young St John is shown emerging from his house, ahead of him a landscape in miniature, which make little sense until we spot him again – comic strip style – a few miles on in his journey, ascending into the mountains. Then we realise that the reason the landscape shifts is because the perspective isn’t arranged for the viewer but for St John, who sees the view from the high up on the mountain. That’s in line with how Berger says that ‘perspective makes the eye the centre of the visible world, but the human eye can only be in one place, and takes its perspective with it’.

Moving Pictures, currently broadcasting and with plenty of past episodes on iPlayer, recently asked a range of experts to discuss another painting featuring John the Baptist – or, at least, his head:  Rubens’ ‘The Feast of Herod’,  from the National Galleries of Scotland. This programme is excellent in pointing out how details charge the painting with an energy that enhances the contrast between luxurious refinements of the feast and guests, and the barbarity of the action. How, for example,  tiny white highlights below lid of the eye make all the difference to Herod’s look of horror as Herodias presents the head; how she prepares to use a fork to pierce the tongue which had criticised her marriage to Herod; and the dog excited by the scent of dripping blood. 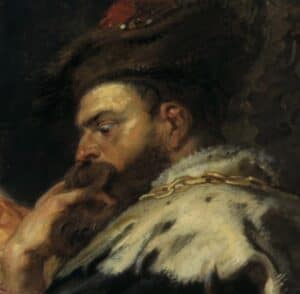 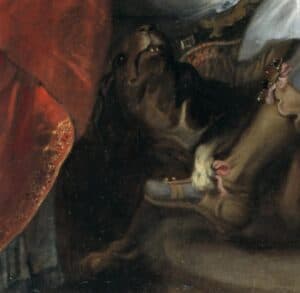