Born in 1997, Barnabás is currently a senior student of the Hungarian University of Fine Arts. A lover of intense and radiant colours, the young artist Barnabás Lakatos Gelléri has freely adopted the palette of Pop Art — or perhaps anachronistically, the Fauves — with gestures of Neo-Expressionism. For the artist’s first London exhibition, the gallery’s walls will be taken over by large 2 by 2-meter vivid canvases, filling and transforming the space with energy and colour.

Lakatos Gelléri is a leading member and proud supporter of the ‘Queer Budapest’ movement, an initiative bringing together and showcasing queer artists. His artworks usually present a street art aesthetic of flattened perspective, aerosol paint and bold figuration, and, on a deeper level, a powerful sense of resistance to the conservatism of Hungary’s establishment. In his words,

‘here in Budapest, we are fighting for survival as queer artists and this kind of collective visibility gave us a lot of strength and power to our community. I hope that through art we can reach people in Hungary and bring them closer to what we do and who we are.’

Barnabás spends most of his time in his studio experimenting with different techniques and improvising. Before his academic studies, Barnabás used to work with oil and mostly striking, impasto, textured images. When he was later admitted to The Hungarian University of Fine Arts, he also started working with watercolours and later he experimented with a sketchier, felt pen direction and he also discovered spray cans. After taking a short break in the fashion industry, the artist went back to his art, this time developing a mix of spray can, watercolour, and impasto paintings, using all techniques simultaneously. ‘In today’s world, many different qualities can work side by side from an aesthetic perspective’, he adds.

The artist is rarely judgemental about his work and thinks that there is not such a thing as good or bad work, as they all form a unique journey, like completing a different puzzle that leads to an exciting finding. There are also specific philosophical questions that inspire Barnabás, such as the significance of silence in the creative practice: ‘it can also be seen that I experimented with a few canvases without painting anything in certain spots. This also has a meaning, it is part of the transformation process, like silence in music, he adds. As the artist comes from a family of musicians, rhythm and music play an important role in his life.

When it comes to the queer lifestyle, the artist feels very empowered by the fact that his identity and style have an echo and following.

‘What I’m painting isn’t directly about me being a queer, nor am I waving this flag or label, but I’m still glad people know this about me because it’s an integral part of my identity, and I want to encourage others’

In Hungary, unfortunately, politically and legally, we still do not deserve equal treatment: it is sad that in 2021, gay couples are not able to marry and adopt kids. That’s why I assume I’m a queer: it is a form of protest in itself. People need to see that we are here, we are present as a community. They need to get to know us, not follow the propaganda; I have no problem with the queer label; I am proud of it. Taking on my queer identity is in itself a political stand by me’

‘Barnabás is one of the most exciting Hungarian artists of recent years. Rarely does a gallerist meet such a young person who, in addition to talent, has all the tools needed to become a great artist. His works are sensual and represent a genuinely fresh and unique aesthetic. Barnabás as an artist is a statement himself, one that I am excited to stand behind and support’ 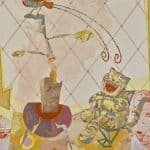