Within his practice of image repetition, social commentary, and critiques on consumerism, Warhol relied on subtle variants to heighten meaning and context – painterly variations of colour, clarity, quantity, density, and scale allowing for singularity amidst his visual tautology.

Following the assassination of John F. Kennedy, Warhol’s quick production of colored silkscreens of the First Lady synthesized the nation’s feeling of loss. Of the eight photographs Warhol chose for the series, two depict her prior to the President’s passing, her smiling face only illuminating the tragedy and subsequent grief. The media’s reaction flooded American households with photographs and footage of the event, and Warhol, in turn, responded to the over-saturation with this seminal series.

Fame and media-saturation, though nearly eclipsed by the political power of Chairman Mao, furthered Warhol’s already masterful compilation of image repetition, mass media, and popular culture. Warhol made an astonishing 199 paintings of Mao in five different sizes, the largest scaled at 177 x 137 inches, and the smallest shown here, at 12 x 10 inches. A sunny yellow, duck-egg blue, and crimson are overlain by the silkscreen print, the gestural strokes of green and surrounding swathes of red revealing Warhol at his most painterly.

Presenting several small scale works from noted series and subjects, this exhibition highlights the larger than life constructs Warhol is able to squeeze down in scale. Jackie, Mao, money, and the hammer and sickle are no larger than twenty-inches, but their significance and cults of personality are equal to their largest dimensions. 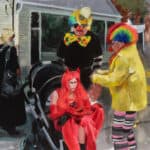