"10" - a powerful exhibition of cutting edge artists examining the ways in which the body is understood during a transformative period in history. - FAD Magazine
Skip to content

10’ is an examination of the ways in which the body is understood in a transformative period in history, where the future is both de ned and mysterious, the past distant and obscure, and how it relates to the psyche in increasingly complex ways.

PM/AM presents ‘10’, an exhibition of figurative work focusing on the human body and the ways in which it interacts with the conceptual and physical spaces it inhabits. Through the work we question the ways we understand the present moment, how it is shaped by a history of deep rumination and symbolic tradition, societal evolutions and technological advancement. In this time of self-reflection we consider why our most pervasive obsession has always been ourselves. The exhibition presents the idea of a spectrum across which two primary concepts intersect, distinct from each other, but bridged by numerous interrelational inquiries.

One end of the spectrum recognises the development of figurative art from a contemporary position, how it has existed over centuries as a visual report of life from a rational human perspective. It identi es points of inspiration for today’s painters who highlight the past, recognise the present and suggest the future. They examine the body in everyday environments and figurative art as a viewpoint on the quotidian experience of being. In referencing those who came before, we reveal contrasts with the heteronormativity and conservatism that occupies much of the history of gurative art.

Departing this familiar reality, the other end of the spectrum takes a deep dive into fantasy and abstraction. The mind shifts to scenarios that are pliable, and a simulacra of the body follows, roaming into unknowable places, implausible futures and skewed depictions of existence. These artists plot a course through the spaces that lurk in parallel worlds of hope and fear, dimensions created out of passion and psychological conflict. Within these places, we meet alternative versions of ourselves – those of intense expressive magnitude, of highly exaggerated form, and those who intertwine impossibly with their environments.

Through the work of a diverse set of artists, ‘10’ provides a report on how our surroundings have evolved, and how we relate to each other on the bleeding edge of cultural development in a world that is rapidly changing. It’s an examination of the ways in which the body is understood in a transformative period in history, where the future is both de ned and mysterious, the past distant and obscure, and how it relates to the psyche in increasingly complex ways. The most illuminating aspect of it, however, is revealed when we step back from a close scrutiny of what these concepts tell us, and instead consider what might exist between them, and between ourselves.

Amanda Ba’s current series of naked red dogs and naked red women draws largely upon the critical theory of Mel Chen and Donna Haraway, more speci cally the concept of animacy tugged out of its linguistic home and applied to race and queer relations, and the naturecultural relations of the world at large. The images welcome a multitude of readings that exist at the amorphous crossroads of Asian diasporic identity, psychosexuality, and post-human theory. She is currently based in New York and was born in Columbus, Ohio, but spent the rst ve years of her life with her grandparents in Hefei, China.

The dominant feature of South London based Benjamin Senior’s work is activity. His subjects are engaged in movement, action and recreation, situated in heady and strangely intoxicating environments which seem somehow prosperous and distinctly continental. Despite a richness and tone that rouses feelings of history in the work, it’s assumed that these are views upon a modern, perhaps utopian society where leisure is held as both an accessible and important facet of life.

An early interest in surrealism is clearly part of Caleb Hahne’s foundation as an artist. From Denver but living now in LA, Caleb’s work draws upon a number of the movement’s most iconic tropes, though reducing the rich panoramas of Dalí and Ende into elegantly minimal pieces which value negative and implied space as highly as detail and deliberation.

In New York-based Didier William’s work attention is paid to movement and transience through a process that blends traditional painting with carving and micro-sculptural manipulations. Though the figures are usually devoid of identity, their powerful physicality and command of space seeks to upturn a history of insignificance and lack of representation in artwork associated with colonial powers.

Emma Cousin depicts familiar yet abstract environments that place focus directly on their warped inhabitants. These vivid figures are engaged in physical entanglements that push the boundaries of comfort and decency, appealing to our curiosity at what the human body, and surrounding social conventions, are willing to accept. Emma was born in Yorkshire but has since relocated to London.

Erin Lawlor is a South London based artist known for the large brush strokes that define and characterise her entire output. Her dramatic paintings are composed through a palette that deconstructs typically Renaissance colour schemes. Experiencing her paintings is like catching a glimpse of a familiar form in the turbulence of a dream, uncertainty and accident somehow working alongside truth and understanding.

In fusing aspects of contemporary minimalism with cartoon figures and bold colours, New York’s James Ulmer brings us back into a childhood world of simplified aesthetics. His characters are often seen caught in motion or interacting with animals, the act of play holding space over the weight of emotion and meaning.

Oska Gutheil is based in Berlin and on the surface takes a similar route, but tells the story within a world that permits the existence of monsters and ghoulish apparitions living alongside and within us. Not so much a depiction of nightmares and fairytales though, the tales being told are of our own communities and habits, and the artist’s experience of existing within them.

Taking the idea of genre discipline and distancing himself as far from it as possible, New York artist Matthew Hansel creates baffling oil paintings which reference every corner of art history. The merging of themes leans into surrealism predominantly, but when faced with a scene that is equally dramatic and absurd, pitting Renaissance masters against pop art and abstract expressionism, the viewer may feel a thrilling reluctance to understand, let alone categorise.

Raelis Vasquez catches a series of points in time, merging the significant with the everyday and sharing moments from the Afro-Latin community in the US, where the artist has settled between New York and New Jersey. The group and solo portraits express a tenderness and vulnerability, with direct emotional resonance caught in a casual and informal approach to composition.

LA based Tahnee Lonsdale paints with an implicit understanding of abstract human form that alludes in part to Matisse’s blue nudes. Her process however involves preparatory sculptural and photographic stages which imbue the work with a particular viscerality, lending weight to more ethereal ideas of emotion, memory and love.

Lagos based Wahab Saheed is passionate about making statements about the world in which he, and the inhabitants of his paintings, reside. His work is characterised by the use of emphatic mark-making and dark tones executed with charcoal, contrasting with bright, cheerful backgrounds. This contrast helps achieve an emotive and fragile examination of topics surrounding the psychological human condition, capturing key events at the root of our existence. 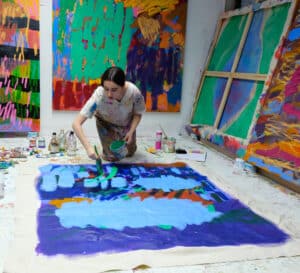 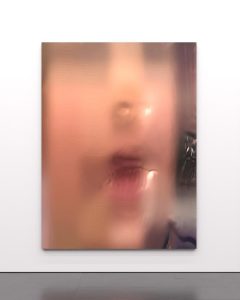 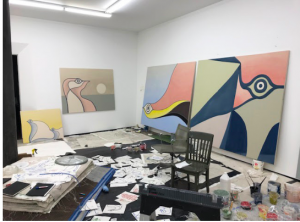 PM/AM are giving you an opportunity to catch up with Brooklyn based artist Anthony Miler during his residency in London.