Paolo Canevari’s latest exhibition distils his artwork’s contention between the power of mankind, and the possibilities of polyvalence. Showing now at the Cardi Gallery in London, Canevari’s retrospective “Self-Portrait / Autoritratto” wrestles with his metamorphic practice, developed over the last thirty years. Across extensive experimentation with the deployment of rubber as a material for sculpture, the work resonates as a caustic critique of our most influential institutions and gives voice to a resistance in the face of overwhelming odds. Be it against ecological crisis, global industrialisation, or wrestling with the medium itself, Canevari’s art is wrought with the tension of opposition and captivates like congealing tar.

Throughout “Autoritratto”, there is seldom a piece which is not subjugated by black rubber. Salvaged as waste from industrial sites, and often starting life as used tires, the works are laboured into existence, forming everything from the great swathes of heavy material in ‘Materia Oscura’ to the monolithic creations of the ‘Landscape’ series. In each case, Canevari has been careful to preserve the intricate details and markings of the medium in question, maintaining the patterns and texture of inner-tubing and tires, to draw attention towards exactly how they were conceived. They’re explicitly used tires, designed to help men re-shape the world, and having been changed themselves to draw attention to this process. There is still dirt in the crevices, and history seeps out of the work.

Despite withholding from a direct environmental message, the volume of representations conjured throughout the space demonstrates above all the artist’s ingenuity, and through him that of human beings. It is through the polymorphous use of rubber that our approach to the whole of the world can be encapsulated. By Canevari’s lens, the earth becomes a space of multiplicity, to be approached by every individual and authority as they desire, and manipulated in ever more devious ways to fulfil their ends. The exhibition co-ordinates this drama across its four floors, as it plays out from the level of individuals and artists to great nations; the latter organised in ‘Continents’ under the guise of ever-larger tires marked with white paint. Everything can be altered, with the world itself both suffocated beneath the churning of rubber wheels, and between the palms of its exploiter. This process isn’t limited to raw materials alone; in J.M.B. and ThANKS, our culture and language become likewise available to re-conception. Three jet-black missiles, named after three religious prophets, loom over a small militia of rubber tanks, waging imaginary wars in the name of peace. The original ideologies have been chemically reconstituted, strapped to rockets, and polymerised intertextually, leaving little of their holy texts but their names, now caught amongst the iconography of systemic conflict. Finally, perhaps in the most extreme expansion of this notion, in his most recent series ‘Monuments of the Memory’, Canevari turns his gaze skyward, to the darkness of space, now discovered to be a wall of rubber canvas. One begins to imagine that there is little that escapes this transcendental perspective; whereby the universe becomes only there for the taking, for the moulding in a great steel press, and the stars burned out by the scent of torched tires.

The work is not a celebration of this thought, and certainly Canevari himself is no industrialist. On the contrary, the world in this account is bleak. But even here, amongst the mourning for nature, and the blackness of galvanised space, there is hope. In the creation of his work, and the articulations of grief and political frustration, Canevari gives light against the onslaught. His position may be untenable within the tide of history and globalised industry, but it seeks to inspire, even to provoke in a world acclimatised to shock, and to writhe and reach out to those who encounter his artwork. Like the pearls which blinker in ‘Constellation’; disparate, but to be treasured all the same, his resistance searches for solidarity in a world defined by oil and rubber. The pieces themselves attest to this, to hope before omnipotent industry, and as embodiments of the artist’s own action. Heaving from beneath the tire treads and marching boots, like Atlas defying gravity, Canevari’s art defines what it means to be a modern rebel, under the threat of society’s rubber sole. 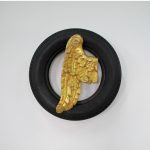 Paolo Canevari’s art has been sculpted from the shadows of the modern world, but he hasn’t lost hope. Working with pitch-black rubber, used tires, and exhausted oil, he turns the waste products and omnipresent aftermath of industry into poignant structures that highlight how human beings have reshaped the world.