In her latest artwork, entitled A Good Time For The Truth, a portrait of Porche Bennet-Bey, 2020, Butler depicts the Kenosha Wisconsin-based social justice activist in a signature polychrome quilted portrait, who was named the Guardian of the Year by Time Magazine.

“Porche Bennet-Bey Is a fearless activist for the people and a guardian of the truth. I was so honored to be able to create a portrait of a Black woman who fights for the rights of the people in her community.”

About Guardian of the Year

“Guardians put themselves on the line to defend the ideals sacred to democracy. In 2020, they fought on many fronts. When George Floyd was killed in Minneapolis in May, it was proof—if anyone needed it—that Black lives are still not treated as equal in America. In the aftermath of his death, a wave of outrage surged and was harnessed by organizers, both veteran and newly energized, to bring millions to the streets and spotlight the inequities in a world that claims to be far better than it is. The movement for racial justice found its voice in multitudes: a mother in Kenosha delivering her frank report to Joe Biden; a sister in Paris calling for police accountability in her brother’s death. In this extraordinary year, they guarded truth—lived truth.“

Porche Bennett-Bey had a simple message for then candidate Joe Biden in September when she approached the microphone at Grace Lutheran Church in Kenosha, Wis.: he needed to better understand the Black experience in her hometown. “A lot of people won’t tell the truth,” she said without flinching. “But I’m telling the truth.”

Kenosha had been in the headlines for days after Jacob Blake, a Black man, was shot in the back seven times by police and left partially paralyzed. Protests engulfed the city, pushing local officials to impose a curfew. Later, a white teenager gunned down protesters, killing two, and President Donald Trump visited to court votes behind a slogan of “law and order.”

Bennett-Bey, a local organizer, expressed frustration that the officers who shot Blake remained free, immune to laws that would surely have condemned anyone without a badge, but she also explained that these events didn’t happen in a vacuum. She told Biden how gentrification had limited affordable housing stock and how police target the city’s minority population. She described feeling that she was turned away from work because of the color of her skin. She spoke urgently of the challenge of raising children amid the COVID-19 health crisis. “I just felt I might as well tell him about what was really going on,” she tells TIME at a late-November rally she planned. “Let him see my life.”

For decades, the words of those telling the truth have been left largely unheeded. Because the victor writes history, the history of the West has been written to minimize the realities experienced by people of color, even to those who experience them firsthand. Marginalized groups have been lied to, told they were intellectually inferior, or should be able to succeed if only they worked harder or pulled up their pants. That means the simple act of telling the truth requires courage—and can feel self-defeating. “Even if I should speak, no one would believe me,” James Baldwin wrote in 1962. “And they would not believe me precisely because they would know that what I said was true.”

But in the summer of 2020, the truth became unavoidable. For the better part of 10 minutes, a white police officer in Minneapolis knelt on George Floyd’s neck even though he was clearly subdued and pleading with a refrain of “I can’t breathe.” The footage shook the world to its core. The callousness and indeed the racism were impossible to deny.

Suddenly, the voices of those who had long been sidelined broke through, demanding that the world pay attention and stop making excuses. But it wasn’t out of thin air. It was because activists like Bennett-Bey forced their fellow Americans to connect the dots and understand just how much—from police brutality to racial disparities in COVID-19 cases—is tied to systemic racism. Night after night, organizers put their bodies on the line, gathering people of all races at a time when close quarters posed a threat, on top of the risk of injury at the hands of law enforcement. They chanted Floyd’s name alongside those of other Black Americans killed in recent months—Ahmaud Arbery, Breonna Taylor, Tony McDade, Elijah McClain. By some estimates, as much as 10% of the U.S. population took to the streets over the summer to call for an end to institutional racism and injustice, in what may have been the largest mass protest in American history. 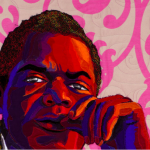 Claire Oliver Gallery today debuts an online sales room and a limited edition poster series called Art is for Everyone. The inaugural poster will feature a work by artist Bisa Butler entitled, I Am Not Your Nego in an edition of 500. Priced at $50, proceeds will benefit Harlem Grown 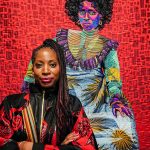