Today, Thursday 17th December, unveils a new colouring book celebrating the Coventry’s unique architecture created by Coventry City of Culture Trust and design studio Uncommon. The creation of the Concrete Colouring Book was inspired by the nature of debate over the years around Coventry’s architecture – the book aims to champion the post-war, modernist and brutalist styles found across the city’s streets.

Coventry City of Culture Trust and Uncommon have commissioned local illustrators to draw on some of its iconic post-war buildings and features. The illustrators were commissioned with the help of the popular independent creative quarter of Coventry, FarGo Village, and each designer was chosen for their varying approaches to line drawing. Curating a collection of different illustration styles fitting of this diverse city.

The colouring book opens with a powerful statement advocating the city’s design differences and honouring the global impact its buildings and architecture have had across the world.

‘Debate has raged about the buildings in this book since before their foundations were laid. Time and again they have been called dull and ugly. Believe it or not, COV’s buildings are famous the world over. This city is a global capital of modernism, brutalism and other post-war styles. And now that buildings in these styles are being torn down the world over, it seems like the time to take a moment to look at them properly. As if for the first time. Acquaint ourselves with every nook and cranny, column and tower. They’re part of our culture. Part of our heritage. They give us character and help us stand out from the sea of glass office blocks you find everywhere else. This is a tribute to the city’s post-war skyline, by the artists that call COV home.’

In contrast to the colourful nature of this type of book, the Concrete Colouring Book wants to commend the ‘greyness’ commonly used to describe the city’s 20th Century architecture. This true reflection of the city is woven through every page, including the cover and overall design layout of the book, both of which were led by design studio, Uncommon.

The Concrete Colouring Book will be sold alongside grey pencils for shading, to craft a full greyscale effect. The book, as well as other brand merchandise, can be purchased at the specialised pop-up shop open at Coventry Transport Museum in the run-up to Christmas.

ABOUT COVENTRY UK CITY OF CULTURE 2021

Coventry UK City of Culture 2021 will commence in May 2021, running for 12 months. The 365-day cultural programme will reflect Coventry as a diverse, modern city, demonstrating that culture is a force that changes lives. Coventry is known internationally as a city of welcome, a city of activists and pioneers, peace and reconciliation, innovation and invention, and now a City of Culture.

Coventry is the city where movement began, from innovation in the transport industry to a history of welcome, it has moved people for centuries. For a whole year, Coventry will celebrate with events, music, dance, theatre, and large-scale spectacle. As well as these big celebrations, it will show its unexpected side, with more intimate experiences and ways to get involved in every neighbourhood. And it’s not just Coventry. This epic celebration will also witness the entire region getting involved and benefitting from the opportunities that being City of Culture brings.

It will be co-created with the people of Coventry and bring about long-term social, economic and cultural benefits. 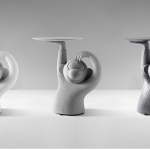 Just what you always wanted a Monkey side table.

Planet of the Apes, Bathing Ape even Ian Brown we love our monkeys now you can get a Monkey side table made from one single piece of concrete.

The inaugural exhibition at the Maurice Einhardt Neu Gallery, 30A Redchurch Street, London, E2. RSVP The exhibition runs from 2nd […]