GRIMM is to present Bad Reception, a presentation of new paintings by Eric White on view from Friday, November 27th, coinciding with Amsterdam Gallery Weekend. This is White’s second solo exhibition in the Netherlands and his third solo exhibition with the gallery.

Bad Reception transports viewers back to a nostalgic era, a time when television was a daily ritual and analogue TV sets were fixtures in every home. This series of works take shape around layers of staged imagery depicting moments of interaction between subjects on and off the television. White has long been fascinated by cinema, particularly obscure films and his starting point for each painting is a scene from a movie featuring a television set, ranging in styles and time periods dating from the 1940s to the 1980s. White manipulates and embellishes scenes to underscore their inherent artificiality so that layers within these paintings draw attention to themselves, deepening the viewer’s perceptual vantage point.

While they recall a familiar sentimental past, White’s paintings also embrace contradictory implications for the medium of television. Included in this series are two paintings featuring a newscaster delivering a report that speak to a time when the T. V. was a definitive and trusted source for Americans. Further scenes confront the viewer with video displays in control rooms, such as those used for surveillance. This combination points to the potentiality of the medium as a source of entertainment and information, as well as a tool for surveillance, manipulation, and misinformation. Indeed, the transmission of recorded images, whether through live feeds, or in the form of produced and edited into stories, is something that we increasingly rely on to order our every day.

Marginal horror films are a recurring source material for the artist, and he translates their psychically charged moments into the scenery of his paintings. Many of the screens appear irregular or distorted; forms = fluctuate as the signal is caught wavering between channels, while others are inhabited by menacing or ambiguous characters. Among these phantasms, White projects his own cast of actors onto the screens. He refers to them as “spiritual ambassadors from the future”. These benevolent messengers permeate the spaces beyond the screen to occupy living rooms and window displays. They are transcendent agents —dressed up in the outlandish garb of early sci-fi films— who have come to warn audiences about a present in which screens mediate communication and a shared understanding of the world. 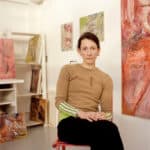 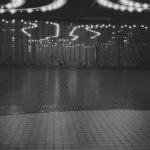 GRIMM has announced the representation of Dirk Braeckman in New York

Since the mid-1980s, Dirk Braeckman (Belgium, 1958) has developed an impressive oeuvre consisting of photography and more recently video.