Hauser & Wirth will present ‘Internal Riot’ an exhibition of new paintings and works on paper by American artist George Condo. Made during the quarantine period, these works reflect the unsettling experience of physical distance and the absence of human contact during this prolonged time of so- cial isolation. The pandemic has forced Condo to take his portraiture practice to a new level, with invented cha- racters captured in an abstract web that reveals the humanity inherent in their fractured psychological states. 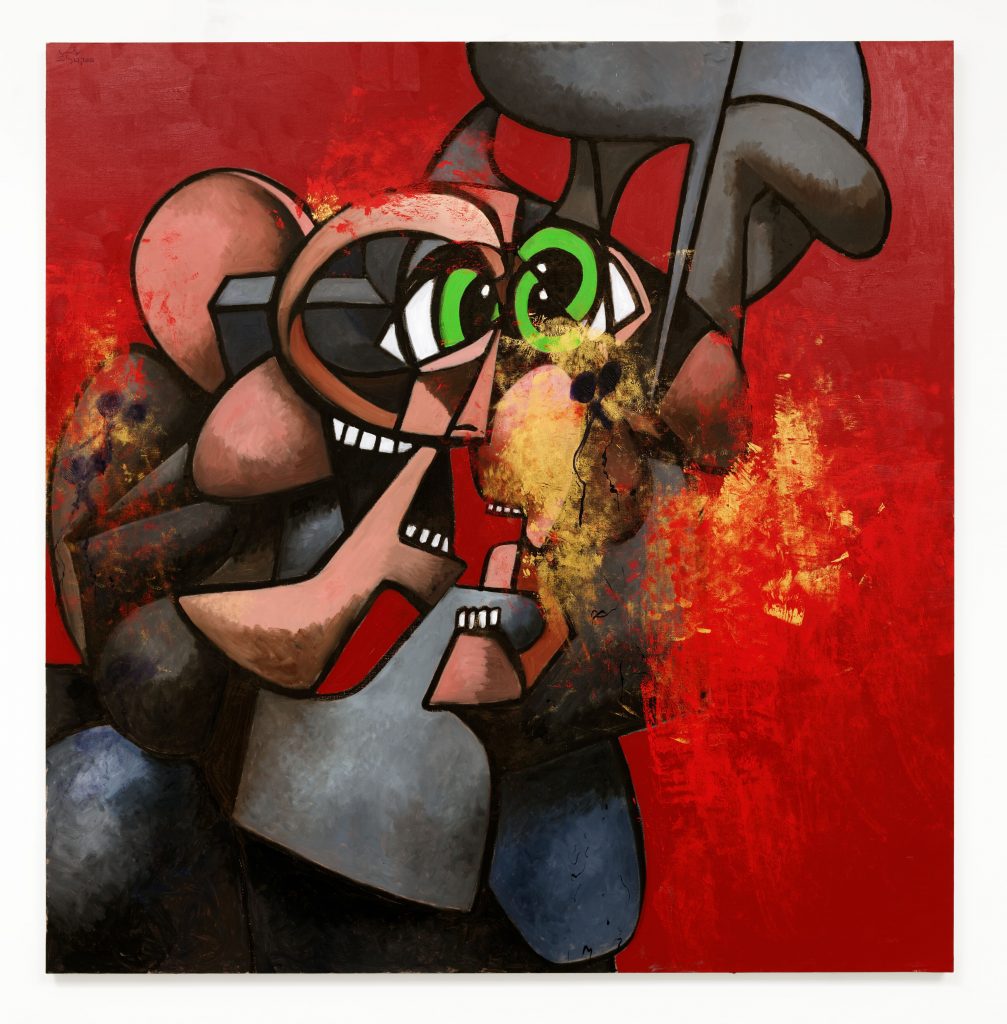 In this new body of work, Condo’s figures grapple with the overwhelming uncertainty and dissonant emotions that are being felt across the globe. The portraits reflect a range of emotions occurring simultaneously within us. The subjects depicted are devoid of connection to one another in a state where, according to the artist, ‘we are dealing with opposing forces and the elasticity of time.’

Earlier this spring Hauser & Wirth presented the online exhibition ‘Drawings for Distanced Figures.’ This new body of work which forms ‘Internal Riot’ continues to provide a powerful commentary on the divisive world we live in today. 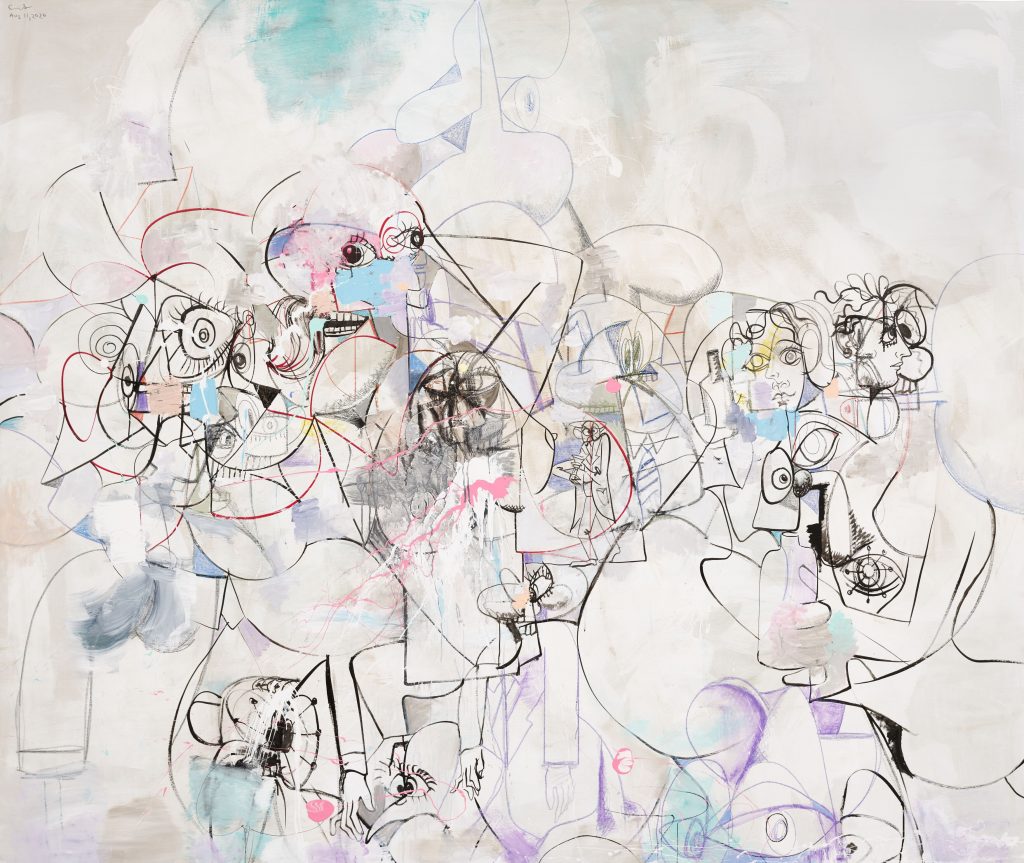 ‘These paintings and drawings explore my experience in isolation and reflect the inner isolation we have all expe- rienced throughout our lives. Internal dialogues while in transit or asleep or in the form of dreams. The pandemic has forced us into that strange, unidentified region of the mind where it seems to function on its own without any guidance. Now our rules and daily lives have been re-ordered as well – face masks, endless sanitization, gloves, and germ warfare. Without structures and data, the humanitarian effort to bring the human essence back into the picture and empathetically solve the virus and our own inner turmoil has turned into a much bigger picture over these last so many months since I left the city. The virus turned deadly and its attack amplified the flaws in humanity, the ruthless denigration of people simply for what they look like and where they come from.

The protests were justified. I protested with my paintings. In a psychological sense, I lit them on fire and turned them upside down in revolt and sickness, ‘Internal Riot,’ which I’m naming this exhibition is about that feeling of just wanting to turn your world upside down and burn it to the ground… and hope a new planet will be born. It’s about that transcendental moment when all things are everything. 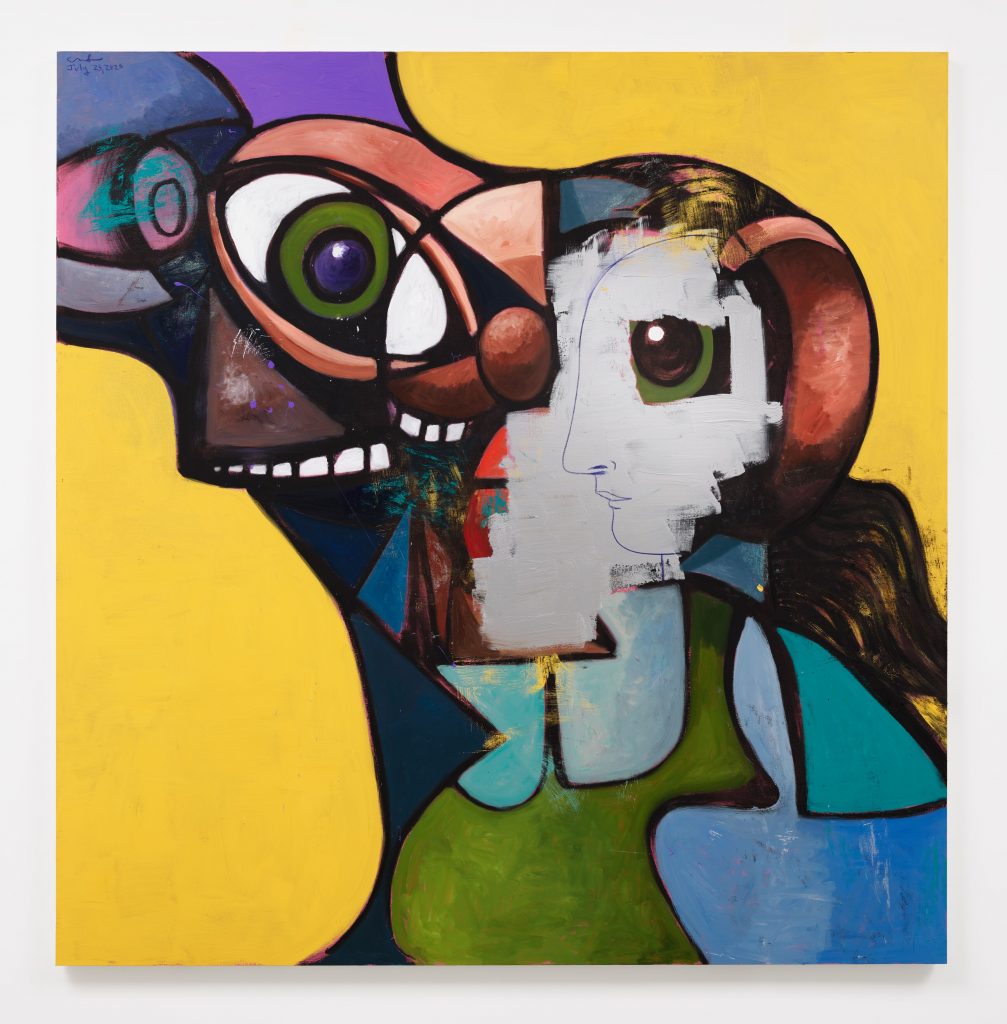 Other paintings and works on paper are my interpretations of the abstract web humanity is caught up in. Compositions moving diagonally on the canvas from right to left or left to right, the polarization, no straight up and down, an endless saga of going one way or another, ending nowhere. Clashing profiles, both reasonable and unreasonable, anger, mistrust, and fear. ‘Father and Daughter With Face Mask’ captures the staring eye of the insane father as the younger child is rendered over a silver mask. His protective maniacal head is trapped in a diagonal construction site over which he has no control. ‘There’s No Business Like No Business’ is what appears to be an out of work, unemployed man who could have once stood out in front of a Broadway theater handing out pamphlets. Covid-19 has shut all those theaters down. Now, he too, is trapped in diagonal suspen- sion, waiting endlessly for the lights to turn green and his job to return. Perhaps it never will. 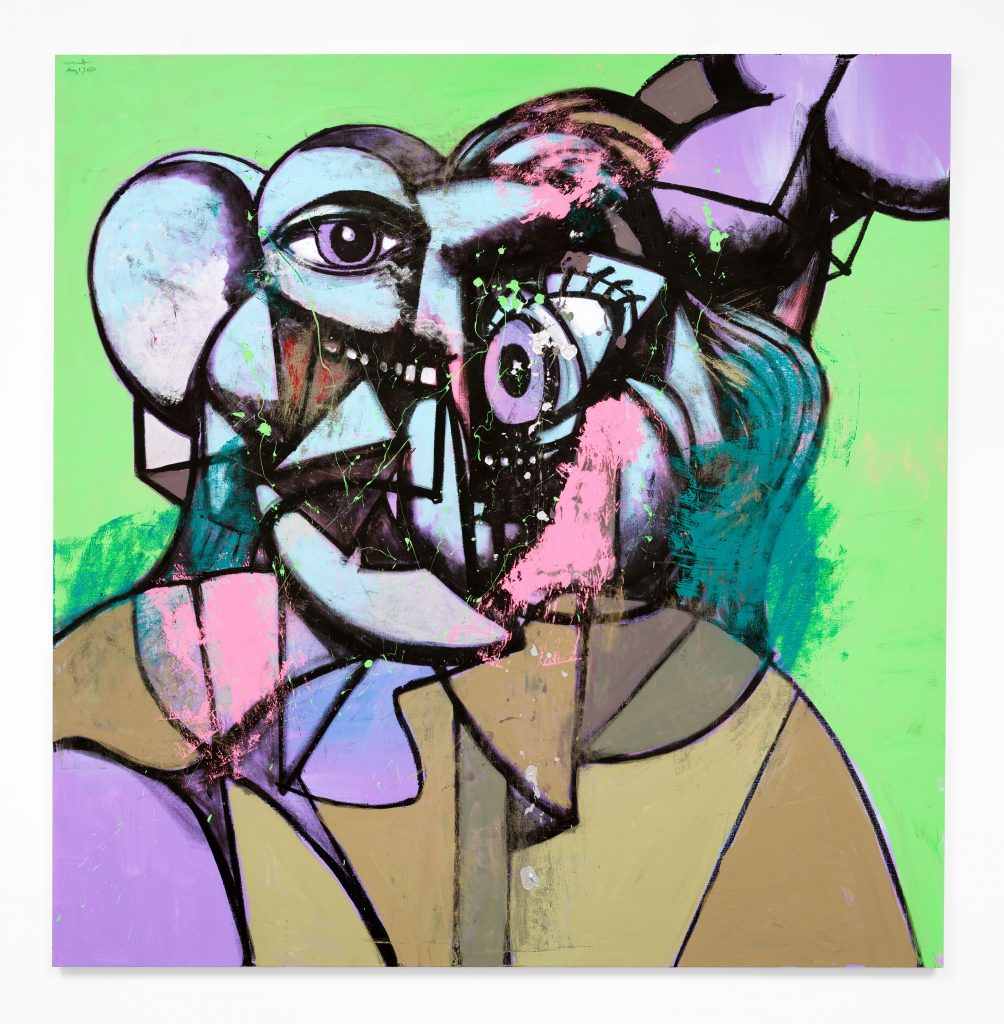 All the paintings relate to the spontaneous, improvisational nature of the works on paper, their immediacy. The painting Internal Riot and the drawing Portrait of Virginia Woolf, are totally interrelated. I worked on a daily basis, dating each piece when it was finished. Some took days, others weeks. Some took only hours. And then the days of doing nothing seemed longer, the elasticity of time became apparent to everyone I know. People call on the phone and can’t remember what day it is anymore, can’t remember what they ‘used to do’ or know what in fact they ever will do. There is a migratory sense in the air. People want to move… with no clear path in sight. This is the moment for change. As an artist I know I can right wrongs in my paintings and that is what I do. I unite every form and color and harmonize it to the point where it sings like a choir. I’d love to see the world do that.’ 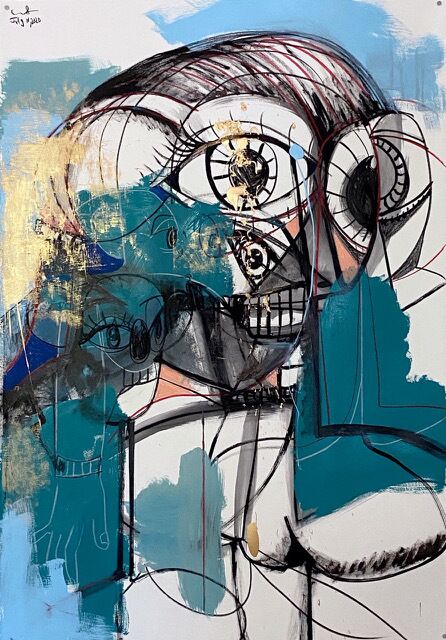 Born in Concord, New Hampshire in 1957, George Condo lives and works in New York City. He studied Art History and Music Theory at the University of Massachusetts in Lowell, where he became particularly inspired by a course on Baroque and Rococo painting. He moved to Boston and played in a punk band, ‘The Girls’; relocated to New York, where he worked as a printer for Andy Warhol; and spent a year studying Old Master glazing techniques in Los Angeles. During his first trip to Europe in 1983, Condo connected with the anarchic Mülheimer Freiheit group in Cologne which included painters Jiri Georg Dokoupil and Walter Dahn.

Condo would soon go on to spend a decade in Europe: in 1985 he moved to Paris and did not return to New York permanently until 1995, with the birth of his second child. During this period, Condo invented his hallmark ‘artificial realism’ and made his first foray into sculpture. Firmly rooted back in New York, he received his first major award, the Academy Award in Art from the American Academy of Arts and Letters, in 1999, followed by the Francis J. Greenberger Award in 2005. Further accolades for this constant innovator would follow: Condo was a 2013 honoree of the New York Studio School alongside writer Musa Mayer and poet Bill Berkson, and BOMB Magazine’s 2018 Anniversary Gala Honoree.Condo had his first solo show in 1983 at the Ulrike Kantor Gallery in Los Angeles. Since then, his work has appeared in a number of solo exhibitions. In 2017 a retrospective of Condo’s works on paper, ‘The Way I Think,’ traveled internationally from The Phillips Collection, Washington DC to the Louisiana Museum of Modern Art, Humlebæk, Denmarm. In a large-scale exhibition one year prior, ‘Confrontation’ at the Staatliche Museen zu Berlin – Museum Berggruen in Berlin, Germany, work by Condo was presented alongside some of his major art historical reference points: masterpieces by Cézanne, Picasso, atisse, Klee, and Giacometti. Condo’s portraiture was the subject of the 2011 – 2012 ‘Mental States,’ a mid-career survey exhibition which traveled from the New Museum, New York to the Museum Boijmans Van Beuningen, Rotterdam, Netherlands, Hayward Gallery, London, United Kingdom, and Schirn Kunsthalle, Frankfurt, Germany; and the 2005 ‘One Hundred Women. Retrospective’ shown at the Museum of Modern Art, Salzburg, Austria, and Kunsthalle Bielefeld, Bielefeld, Germany.

In addition to appearing in solo and group exhibitions, Condo’s work has been honored with inclusion in Biennials in the United States and abroad. In 2019 he participated in the 58th Venice Biennale’s ‘May You Live In Interesting Times.’ His work was also exhibited in the Venice Biennale six years prior, in 2013. Other biennials in which Condo has participated include the 13th Biennale de Lyon in 2015, the 10th Gwangju Biennale in 2014, the 2010 and 1987 iterations of the Whitney Biennial, and the 48th Corcoran Biennial in Washington DC in 2005. Condo’s work can be found in renowned public collections internationally, including: Art Gallery of Ontario, Toronto, Canada; Astrup Fearnley Museum of Modern Art, Oslo, Norway; Centre Georges Pompidou, Paris, France; Dakis Joannou Collection Foundation, Athens, Greece; Museu d’Art Contemporani, Barcelona, Spain; Staedel Museum, Frankfurt, Germany; Tate Modern, London, United Kingdom; The Broad Collection, Los Angeles CA; The Metropolitan Museum of Art, New York NY; The Museum of Modern Art, New York NY; The National Gallery of Art, Washington DC; The Solomon R. Guggenheim Museum, New York NY; and the Whitney Museum of American Art, New York NY.