Canadian-British artist Andrew Salgado is known for his brightly-coloured, largely-figurative paintings that draw as much influence from art history as they do from the vernacular. His solo show Strange Weather opens with Beers London on Saturday the 17th of October, so we decided to have a candid and informal chat about how the show came together amidst the chaos of what 2020 has turned out to be. 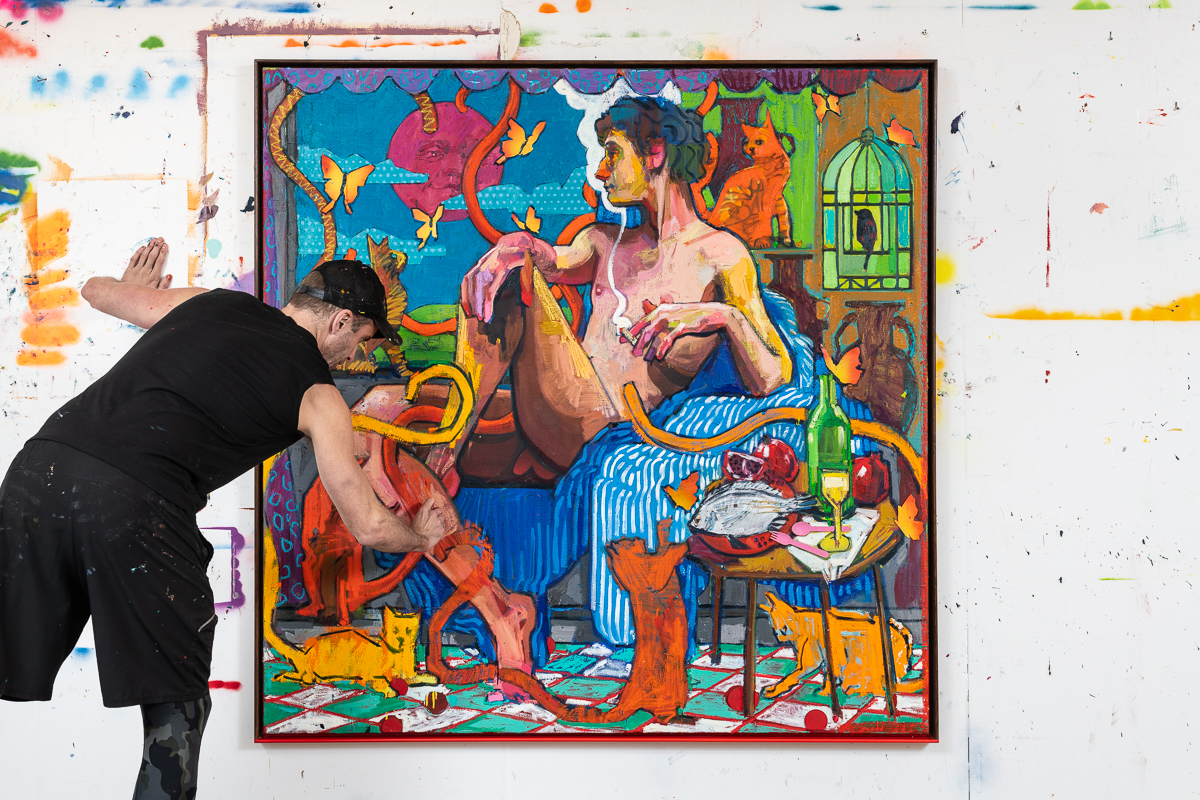 Benjamin Murphy – First tell me about the process of getting this show made. What impact did Covid19 have upon it, and has the show changed at all in response to the current situation we find ourselves in?

Andrew Salgado – I took time off during Covid. I found painting difficult and also pointlessly self-indulgent. I guess that’s what painting is anyway but it seemed weirdly narcissistic to me at the time. I worked on other things for about three months and when I returned to the show my desires and motives had changed. Then I realised that this idea of isolation had crept into the works. 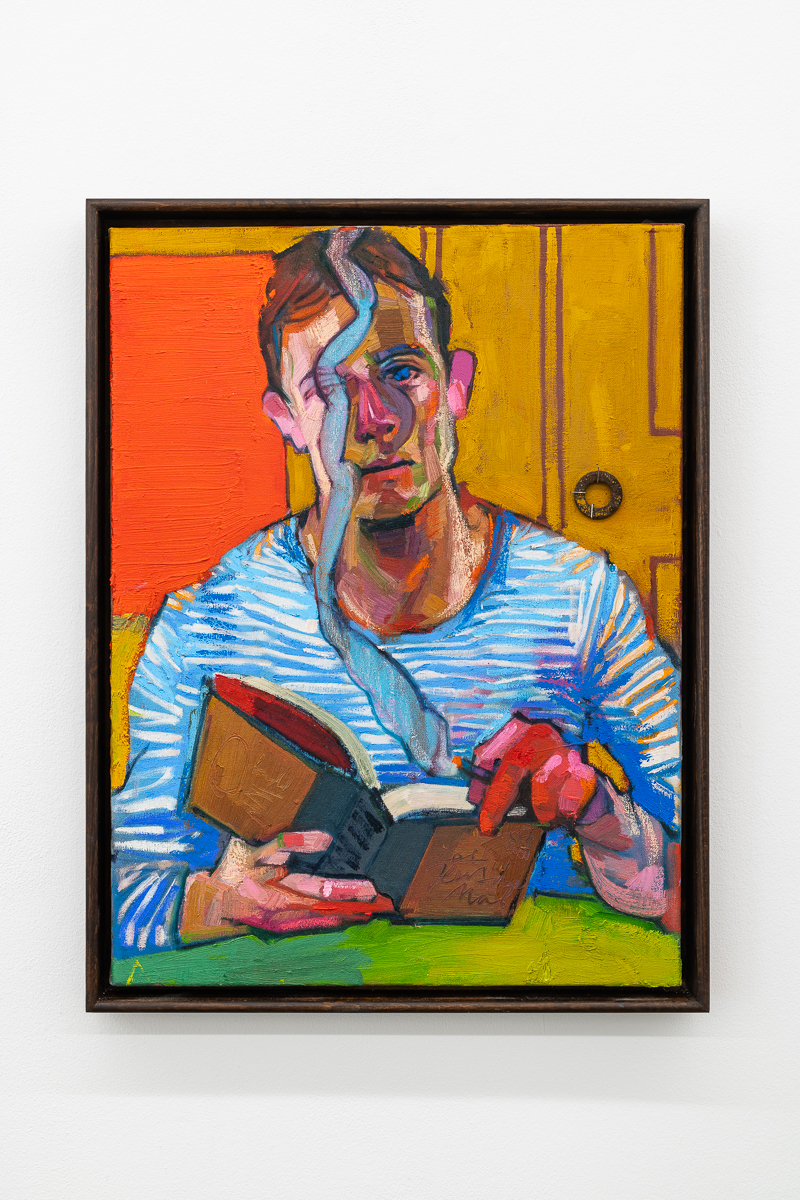 Andrew Salgado, The Man Who Saw Everything (2020) Oil, Oil Pastel and Mixed Media on Linen, 50x45cm courtesy of the artist and Beers London

Wasn’t it originally intended to be a spring show?
It was originally titled In the Springtime We Go Dancing, but in retrospect, I wasn’t ready. I wanted to postpone it anyway so in the strangest way possible I got what I wanted. I feel like I have learned that I need time to create – and to go through the process of making and cutting and making and cutting until I find my footing.

Like I said to you the other day I’m not sure if we ever actually nail our ‘intention’ or we just wander further, or closer to it. I needed the time to work through whatever I was doing. Every time there are hangnails, but at a certain point it becomes like, ‘enough’ and I’m ready to just present whatever I have and move on to something new.

I have really had a lot of fun this time around and I think that will come through.

That makes me think of this Paul Valéry quote:

“In the eyes of those who anxiously seek perfection, a work is never truly completed—a word that for them has no sense—but abandoned; and this abandonment, of the book to the fire or to the public, whether due to weariness or to a need to deliver it for publication, is a sort of accident, comparable to the letting-go of an idea that has become so tiring or annoying that one has lost all interest in it.”

And that’s exactly how I feel about pretty much everything I do. 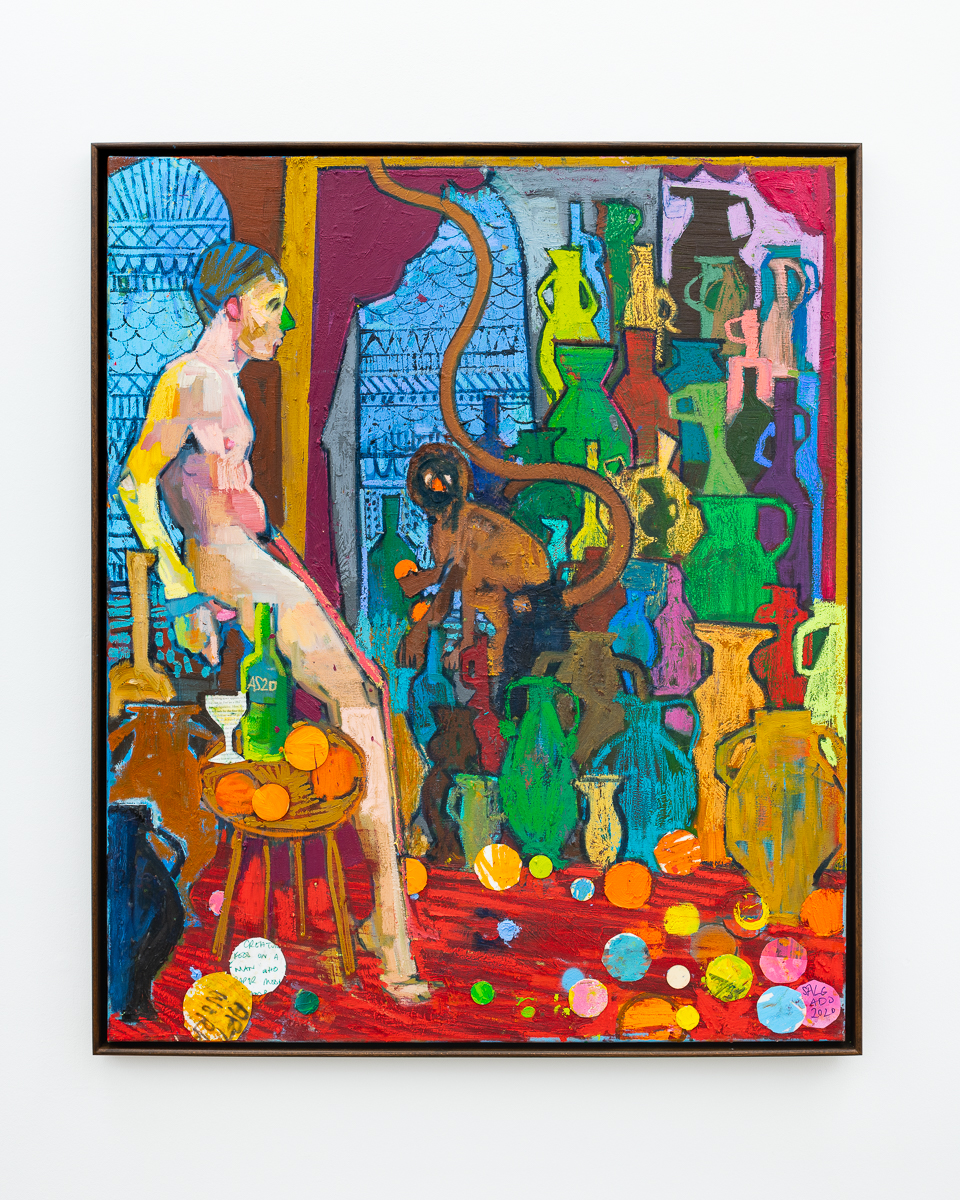 Andrew Salgado – Fool On A Hill (2020), oil, oil pastel and mixed media on linen, 150x120cm courtesy of the artist and Beers London

There is definitely a fine line between loving obsess and complete saturation, It kind of explains how we can devote so much time to something and then put a box cutter through it.

Haha yes, I do that a lot too.

I have a theory that you learn more from failed paintings than successful ones, but I also think that’s just a maxim used to prevent ourselves from going crazy when something fails miserably.

I worked on this piece called… well I shouldn’t even say which one, but I worked on it for months and it even got a frame until finally i just looked at it like, ‘ok you’re rubbish’ and it was reincarnated as something else.

It’s important to acknowledge when something isn’t working, and to enforce strict quality-control on what we let out of the studio.

Most if not all of these things will probably outlive you.

I am also learning that not everything needs to take me 5000 hours. I am learning to pull back, even if that was a late development for me.

So tell me about the works in the show, how do they differ from your last body of work? They seem even brighter (if that’s possible) – and they don’t seem like the melancholic works that the title might suggest. Do they come from a place of hope amongst this chaos we all find ourselves in?

I like the idea of painting what you know – painting what is immediately relevant to you. Last year when we did the booth at Untitled Miami I spent most of a year producing works for a fair without knowing whether or not we’d actually be accepted. That anxiety materialised as a fairly tongue-in-cheek criticism or satirical view of what I view as the artifice and frustration and pure BS in the art world.

So those works had a really crass angle because I was sort of poking fun of the entire construct that was supporting them.

I’ve really tried to move away from this notion that as a gay artist I have to be autobiographical. I’ve been autobiographical and I don’t want to be anymore. At least for now.

This is a long-winded way of telling you these works are all about fantasy and romance. But they are more saturated.

There’s a sense of humour here for sure and love. That very romantic idea of love, like people being swept up in clouds and shit.

So do you feel freed of something that confined you before?

I think I have just come to terms with things beyond my control, but also in some ways yes I do.

Are there any surprises in the show that you can tell us about?

The install is going to be… memorable, and playful. There are also a number or surprises in terms of the paintings. I’ve shared perhaps 6 or 7 works, but a couple of those have changed drastically since… there are about 25 works in total but I want the hang to be deliberate so I love the idea that we have options when we get in there. We will hang, I suppose, about 12-15 of them because the works need to breathe to be considered the way I want them to.

What part of the show are you most excited by?

Well, there’s a simply massive piece that I am planning to hang on what the gallery refers to as the ‘forgotten wall’ in reference to where it is in the gallery. I like that we aren’t making it the de facto feature. I’m excited to edit what I have and show restraint.

I’m excited by the female nudes, in particular, a piece called Neon Odalisque.

I’m excited for people to catch references to art history as the majority of my figures are plucked straight from other paintings. 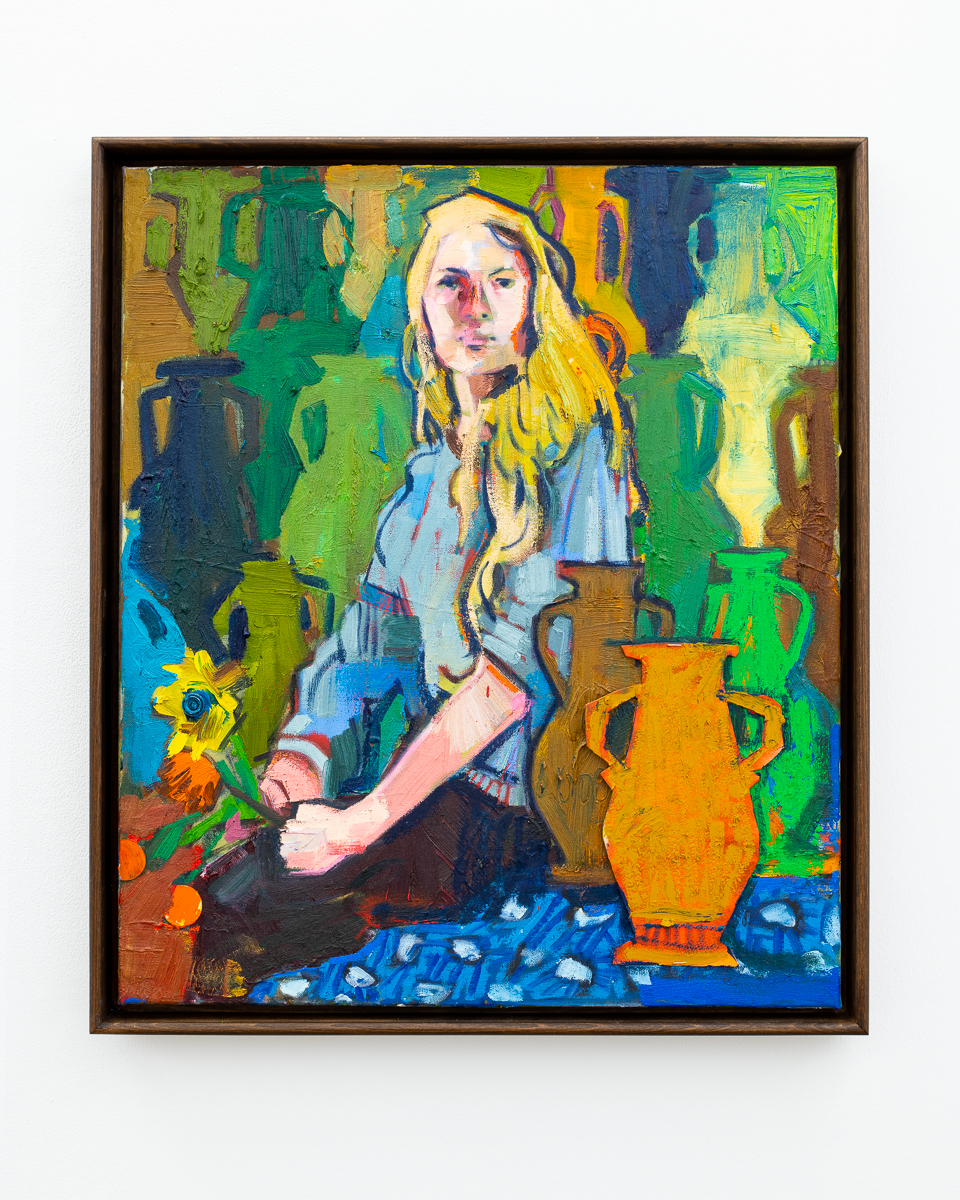