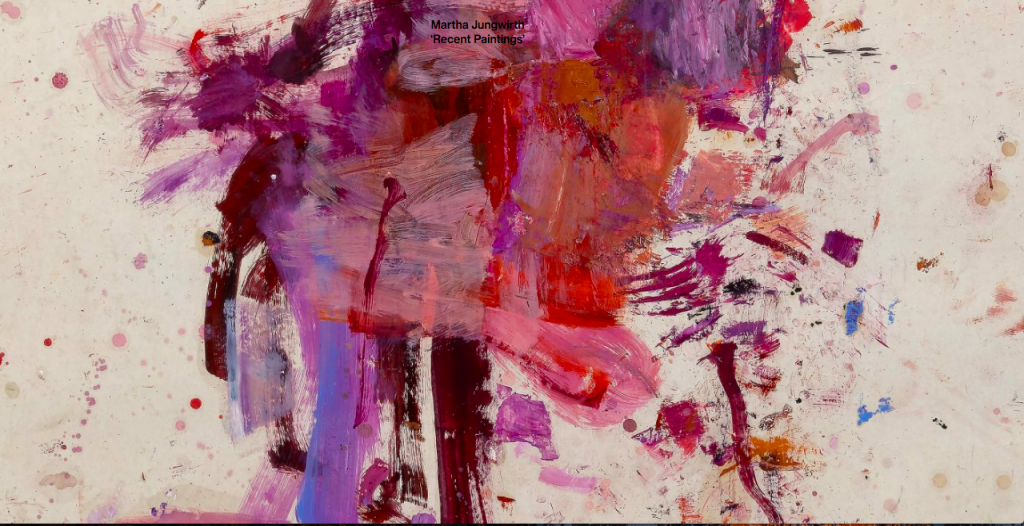 The exhibition will centre around a new body of large-scale, oil on paper paintings mounted on linen. These works continue to develop Jungwirth’s expressive language that combines the haptic physicality of brushstrokes, hand gestures, paint splashes and splatters with a sensitive restrain, often leaving large sections of her brown paper empty and allowing the residual oil of her pigment to seep from her marks.

Painted over the course of the past year, this body of work makes reference to the Austrian painter Richard Gerstl (1883-1908). Known for a diverse oeuvre in a variety of styles, but particularly his strikingly intimate, discordant self-portraits, he was for much of his life considered a pariah by the artistic establishment and tragically died at the age of 25. The exhibition also includes a selection of large-scale watercolour on paper paintings, which form an essential aspect of Jungwirth’s practice and which contain some of her most iconic painterly formulations.

Martha Jungwirth was born in 1940 in Vienna, where she continues to live and work. From 1956 to 1963 she studied under Professor Carl Unger at the Academy of Applied Arts Vienna. In 1968, along with Wolfgang Herzig, Kurt Kocherscheidt, Peter Pongratz, Franz Ringel and Robert Zeppel-Sperl, Jungwirth co-founded the artistic group “Wirklichkeiten” [“Realities”], of which she was the only female member. In the decades following, despite her work’s ingenuity and relevance to artistic developments at the time, Jungwirth did not receive the international notability of her peers, though she continued to occupy an important role in Austrian art discourse. Her work was reintroduced to a broader international audience in 2010 following an exhibition curated by Albert Oehlen at the Essl Museum in Klosterneuburg, Austria. Since then, Jungwirth has gained increasing attention and has been the subject of several solo institutional shows.

Major survey exhibitions of Martha Jungwirth’s work have recently taken place at Kunstmuseum Ravensburg, Ravensburg, Germany (2018), the Albertina Museum, Vienna, Austria (2018) and the Kunsthalle Krems, Donau, Austria (2014). In 2019 the artist was commissioned by the Vienna State Opera to design ‘The Iron Curtain’ that separates the stage and auditorium for their 2019/20 season. She has recently participated in a two-person exhibition with Albert Oehlen at Galerie Mezzanin, Geneva (2017), and has been included in group exhibitions at MuMOK, Vienna, Austria (2016); Kunst der Gegenwart, Klosterneuburg/Wien, Austria (2016); Rupertinum, Salzburg, Austria (2015); and Essl Museum, Klosterneuburg, Austria (2014). The artist’s work is currently the subject of a solo exhibition at the Liaunig Museum, Neuhaus, Austria.

On Wednesday 29th July Modern Art’s new gallery, located around 7 Bury Street, SW1Y 6AL opens with an exhibition of recent paintings by Martha Jungwirth. In accordance with government guidelines, a limited number of visitors are allowed within the galleries. To schedule your visit please tap the link in bio or call us on +44 207 299 7950 #stuartshavemodernart