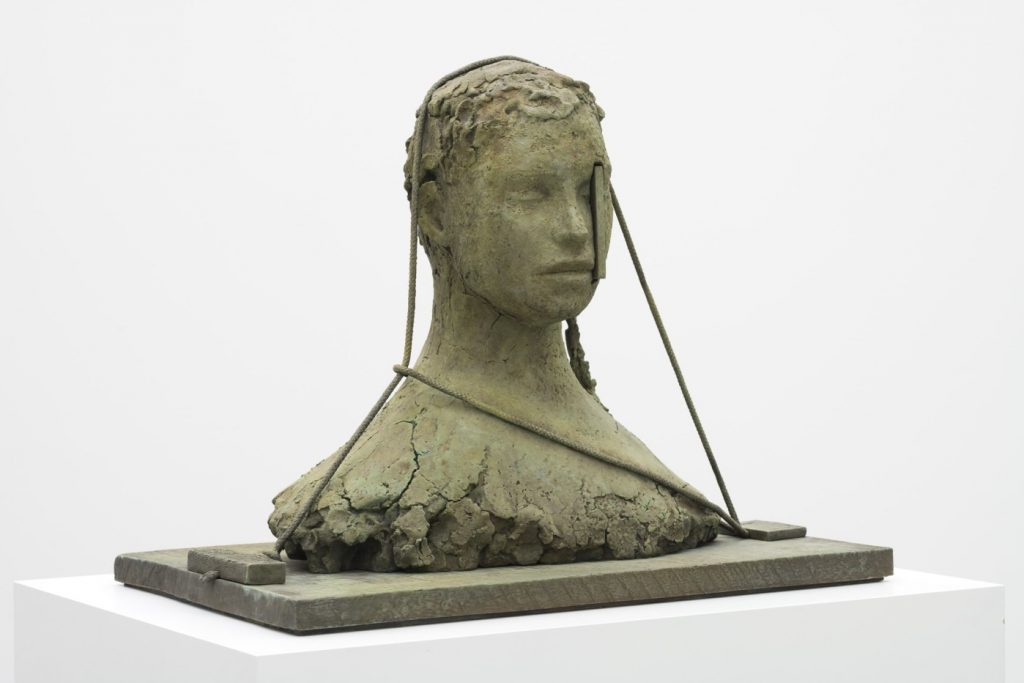 Composition with Two Ropes, 2020 (?) has three unusual features which are par for the Belgian artist’s course.

First, he would sooner date it 1986, for that is when (at 18) Manders started making his ‘Self-portrait as a Building’, a fictitious place filled with his work. Manders sees that as a “super-moment” extending through time, in the same way that the words of an encyclopaedia or dictionary always exist in the present, and insists that all his works over the past 30-odd years were made in that moment. ‘In the beginning’, he says, ‘I actually put the same date on all my works, but then I realized that if I continued doing that I would not be able to function in the world, because museums could not accept it’. 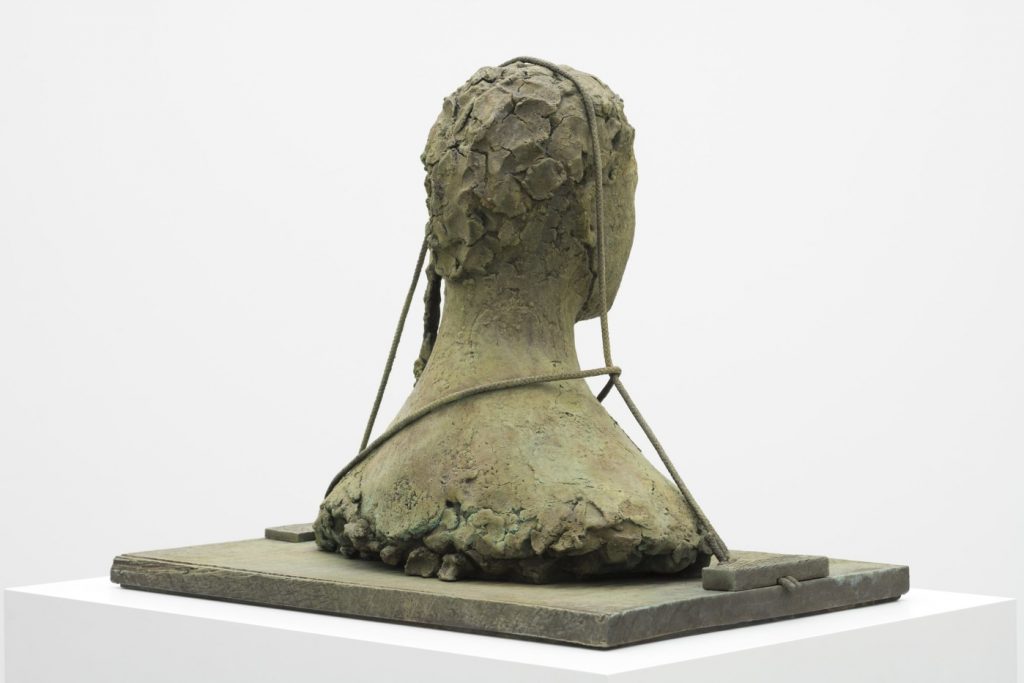 Second, though it looks like peeling dry clay, rope and wood, creating the sense that it may not last long, it is all bronze. What seems a paradoxically fragile, if unfinished, survival of a timeless archetype is actually a highly robust and fanatically precise work tied only to 1986. The illusion isn’t easily achieved: Andrew Maerkle reports that ‘it takes two weeks to paint a bronze with seven layers Manders requires: during one step the assistant actually removes paint to give the appearance that the sculpture is worn and, in another, uses a dry brush technique to gently graze the uneven surface so that pigment is only applied to the raised parts of the piece’. 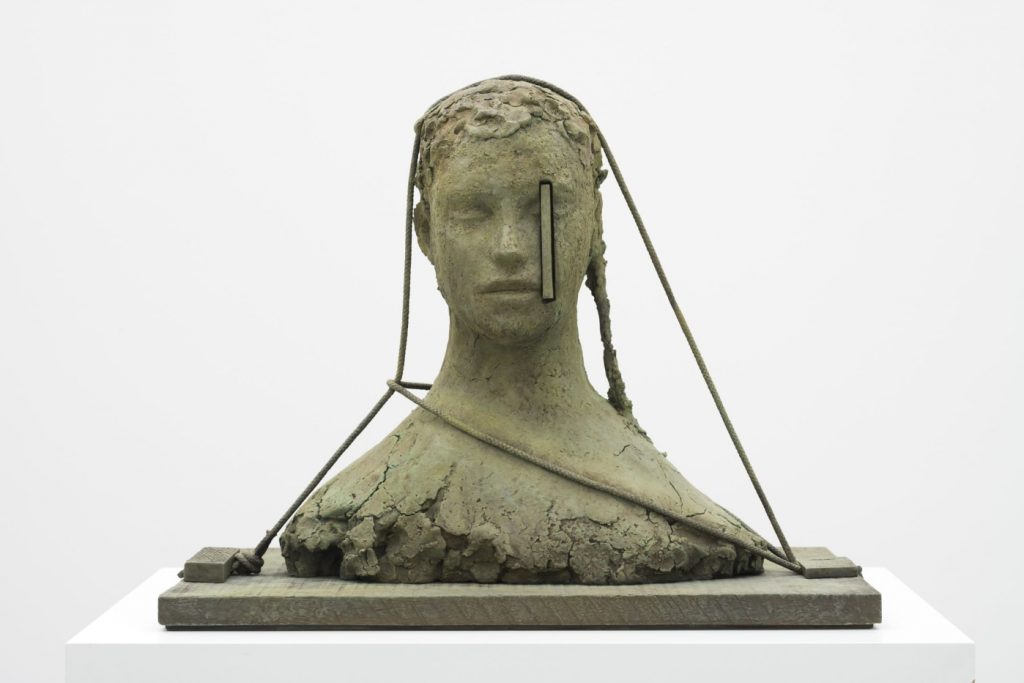 Third, there seems to be a lump of would-be-wood stuck into the classical would-be-clay form. According to Manders ‘I was thinking if you take a few pieces of wood and put them on the table with a certain amount of clay, then how could you say as much as possible with only those materials? So I came up with the idea of a head stuck between vertical panels, and I only had to use a little bit of clay to make a sliver of face, and then it became this composition of verticals…. I have an interest in how a form can be language – how a group of verticals can be like language’. 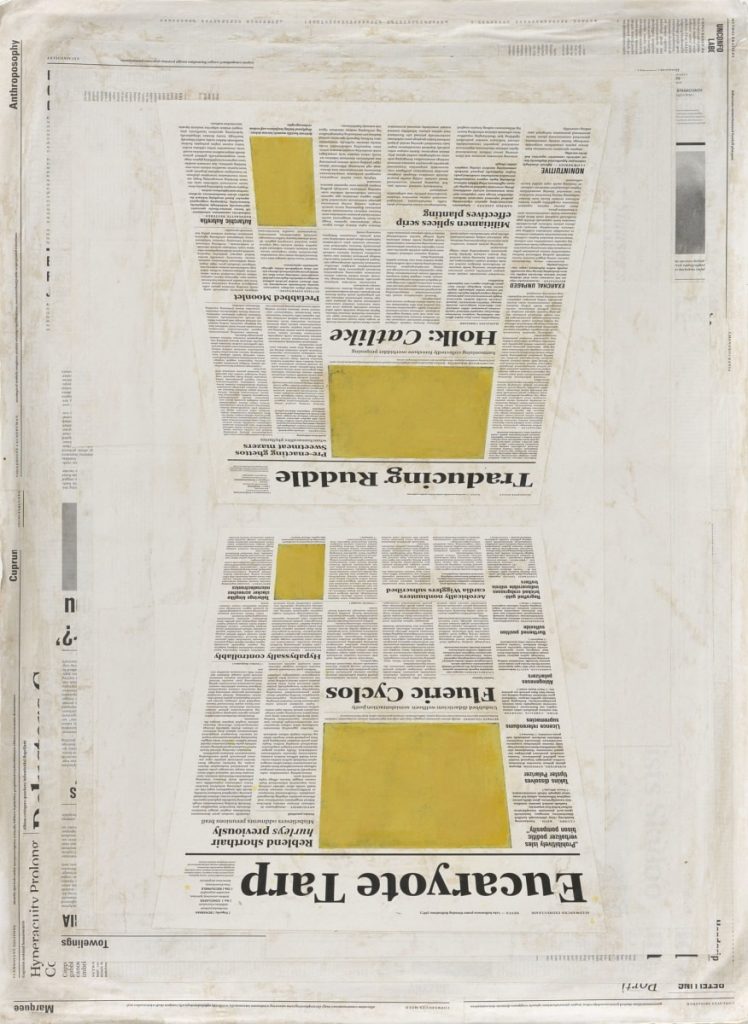 This acrylic and offset print on paper mounted on wood, Perspective Study, 2020, is from an ongoing series which also emerges from the logic of avoiding time other than 1986. Manders says he ‘needed to use papier-mâché for a different work, and papier-mâché requires newspapers, but I am not allowed to use real newspapers because then I would bring time into my work, and I don’t want to have dates because everything is made all in the same moment. I solved the problem by making fake newspapers’. He makes them by taking words from an English dictionary and placing them in a random order. Each word is used only once*. Then, in timeless manner again, he turns them into perspective studies, that being a technical endeavour which he feels every artist since the Renaissance should attempt.

* once is probably enough for the prominent titular word ‘Eucaryote’, a variant spelling of ‘Eukaryote’, that being an organism composed of cells characterised by a discrete membrane with a nucleus, or – to put it another way – all life forms except bacteria, given that amoebae have a membrane. I guess there’s nothing in this newspaper for the simplest single-celled community.