Cathie Pilkington RA has been elected as the new Keeper of the Royal Academy. - FAD Magazine
Skip to content

Rebecca Salter, President of the Royal Academy of Arts, said:

“As an artist and teacher, Cathie Pilkington will bring a wealth of experience to the role of Keeper and joins the RA Schools at a particularly challenging time, with our students working from home and the future uncertain due to the coronavirus pandemic. Her guidance and leadership for the students will be invaluable. I look forward to collaborating with her as we work towards reopening and as the RA Schools approaches its vital restoration and renewal project in 2022 which will preserve the heritage of the institution whilst also ensuring it continues to provide an exceptional contemporary postgraduate art education.”

“As a passionate practitioner and an established Professor in the RA Schools I have witnessed first-hand the transformative effect that studying at the Royal Academy has on a student’s life and work. As the new Keeper with unprecedented challenges ahead, I am deeply committed to promoting and protecting this wonderful and unique environment. I look forward to working closely with the President, staff and students to ensure the RA Schools remains energised, innovative and resilient for future generations of practicing artists.”

Cathie Pilkington is an artist whose work engages critically with the canonical history of figurative sculpture. Crossing the borders of traditional, modern and contemporary idioms, her work combines intensively modelled and painted sculptures within immersive installations comprising a diverse array of props, materials and studio furniture. Her site-responsive installations are balanced ambivalently between chaos and precision and have been described as a kind of art historical fly-tipping. She studied at Edinburgh College of Art (1986-91) and The Royal College of Art (1995-97) She was elected Royal Academician in 2014. In 2015 she became Professor of Sculpture at the Royal Academy Schools. Recent projects include: The Value of the Paw, V&A Museum of Childhood, Bethnal Green 2012; Life Room: Anatomy of a Doll, RA Schools Life Room 2017; Doll for Petra, Ditchling Museum of Art and Craft 2017; Her Working from Home intervention occupied Dorich House Museum in 2018 and Pallant House Gallery in 2019; The Covering recently showed in Room 2 at Karsten Schubert 2020.

Glow in the dark art and a singing duck. 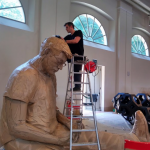 Grayson Perry, Cathie Pilkington and others named as judges for major London exhibition of ‘Outsider Art’

Environments is the 2019 national exhibition by award-winning arts charity Outside In (based in Sussex) and will showcase the work of up to 80 artists who identify as facing barriers to the art world.