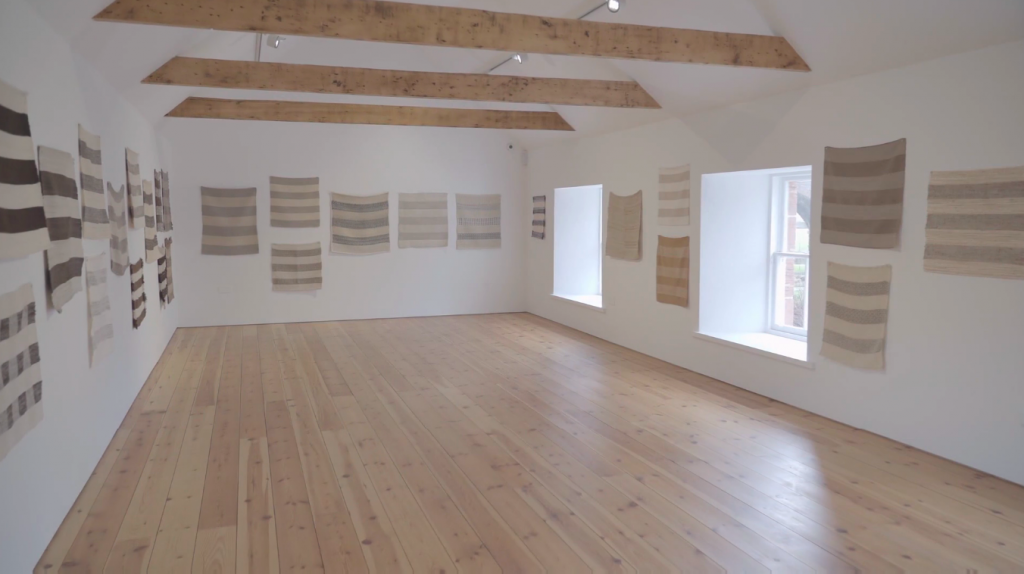 Acts for placing woollen and linen, an exhibition by American artist Helen Mirra opened on 21 March at CAMPLE LINE and is temporarily shut but the weavings are being showcased online with a beautiful virtual walk through.

Standard Incomparable, is a project of international scope first brought together in 2015 by Mirra and first shown at the Armory Center for the Arts in Pasadena, California in 2016. Comprising weavings made by weavers from 16 countries and all born between 1949 and 2009, it will be on display at CAMPLE LINE for nine weeks before it becomes the material for a new work by Helen Mirra – Acts for placing woollen and linen (2020).

Virtual walk-through (10mins) – with closed caption numbering available that corresponds to a checklist of weavings: which are also being showcased day by day on their social media.

From the end of May onwards, the weavings will be taken from the gallery by invited participants (both local and from further afield), and placed outside in the surrounding landscape where they will be left. Each weaving will leave the gallery with a person or group by foot, and be placed somewhere that seems right for it. In this way, as Mirra says ‘the collection will be let go of.’

For now, CAMPLE LINE are asking people to enjoy the work with a virtual walk through until it is safe to walk the works out into the country side.

Cample Mill itself is an especially poignant location for Acts for placing woollen and linen. It operated as a weaving mill throughout the 19th century before being repurposed several times throughout the 20th century – a place itself from which weaving and all its associated activity departed.

There is also an exhibition film (5.30mins) HERE