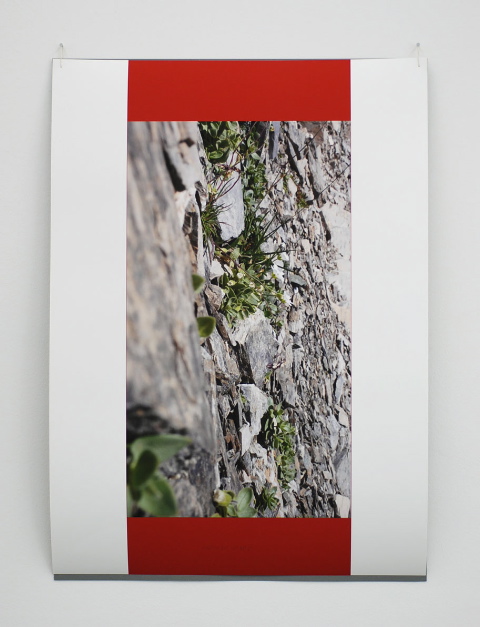 I’ve been in Switzerland for the past year. I spent a lot of time in the mountains, hiking and collecting rocks. I set out while occupied with the idea of pan-psychism: that consciousness, of a sort, exists at the level of the atom. This is not unrelated to perceiving the transference of one’s own experiences and feelings onto one’s surroundings, onto the world of things.

The one thing on the wall in my room in Basel was a postcard reproduction of the poster for the Robert Bresson film Lancelot du Lac. It’s a simple clunky cartoonish drawing of a knight falling off a horse (both are overturned) and vomiting blood. It isn’t so much grotesque as it is matter of fact.

Difficult to say how I chose particular rocks, though it was easy to tell why most of them weren’t tempting – too small, too round, too sharp, too impressive, too whatever. Their maximum size was determined by what I could carry in my backpack. I wasn’t sure what I would do with them, but the task generated momentum to go for the hikes – that there was some extra labor involved, non-essential to the wanders. When I took a rock, I marked the location on the trail map, and I put a camera on the ground in the same spot and took a photograph, ostensibly of what the rock saw from that place.

I placed the rocks on folded Swiss military blankets as staging grounds. I noticed that the size of the folded blanket was the same size as an unfolded trail map.

This exhibition includes rocks with their substitute quarters, corresponding photographs, and a couple of wall paintings. 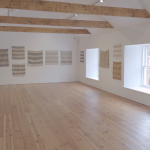 Acts for placing woollen and linen, an exhibition by American artist Helen Mirra opened on 21 March at CAMPLE LINE and is temporarily shut but the weavings are being showcased online with a beautiful virtual walk through.