Joana Vasconcelos: Beyond is her largest exhibition to date in the UK - FAD Magazine
Skip to content 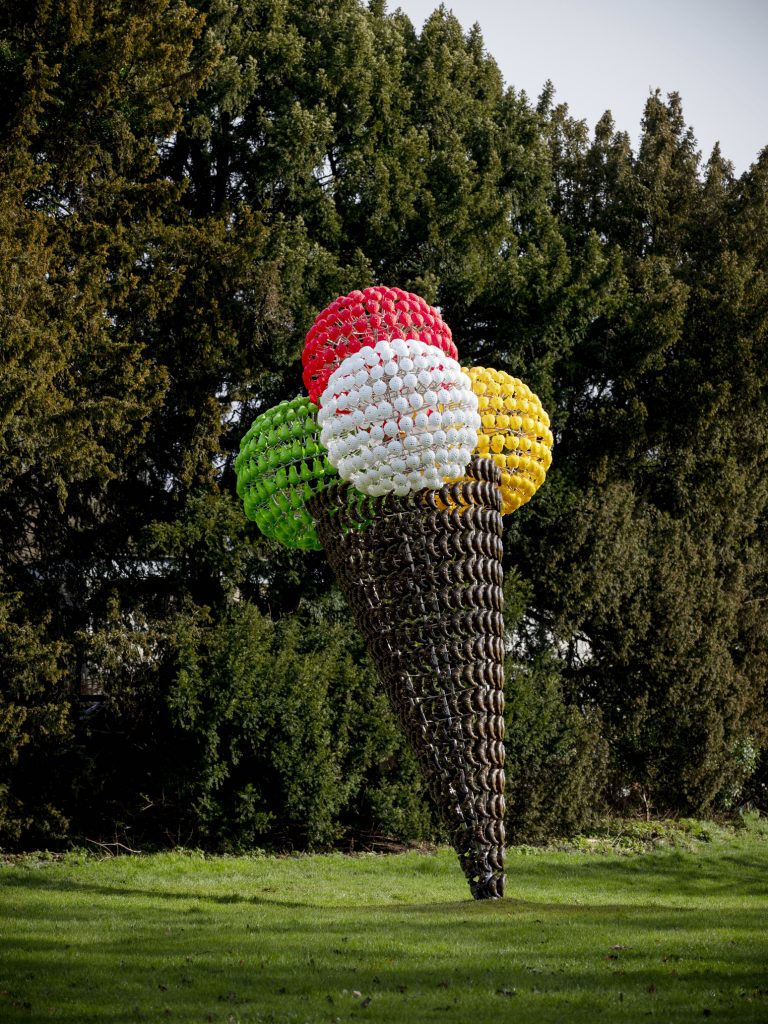 Yorkshire Sculpture Park (YSP) presents a major exhibition of over 25 works by leading conceptual Portuguese artist Joana Vasconcelos. One of the most prominent female visual art practitioners in the world, this is Vasconcelos’ largest exhibition ever held in the UK and YSP’s headline presentation for 2020 in a year of programming dominated by women artists.

Bringing together works produced over the last twenty years, Joana Vasconcelos is a dramatically choreographed selection of vibrant sculptures that engage with one another across YSP’s unique contemporary architecture and 18th century landscape. Shown in the Underground Gallery and extending into the surrounding gardens, the exhibition presents dynamic and playful sculptures that examine, expose and celebrate the creative lives of women.

Exploring historical and contemporary societal structures, Vasconcelos focuses on the subversion of material and the decontextualization of everyday objects. She frequently uses items associated with domesticity and craft, including household appliances, fabric and crochet, to comment from a feminist perspective on national and collective identity, cultural traditions and women’s roles.

The hand-crafted versus the industrial is reflected in one of Vasconcelos’ most energetic and colourful works, Pop Galo (2016). Inspired by the image of the Portuguese rooster, Pop Galo brings historic and modern methods of making together, fusing handmade ceramic tiles and LED light technology, to create a contemporary pop art statement which celebrates the rooster of Barcelos – the most popular piece of the country’s traditional pottery. At over nine-metres-high and covered by 17,000 glazed tiles, by day the work traditionally represents the pop culture icon. At dusk, Pop Galo becomes animated by 15,000 LED lights, illuminating the historic parkland. Programmed alongside the lights, a composition by musician Jonas Runa plays from the rooster. 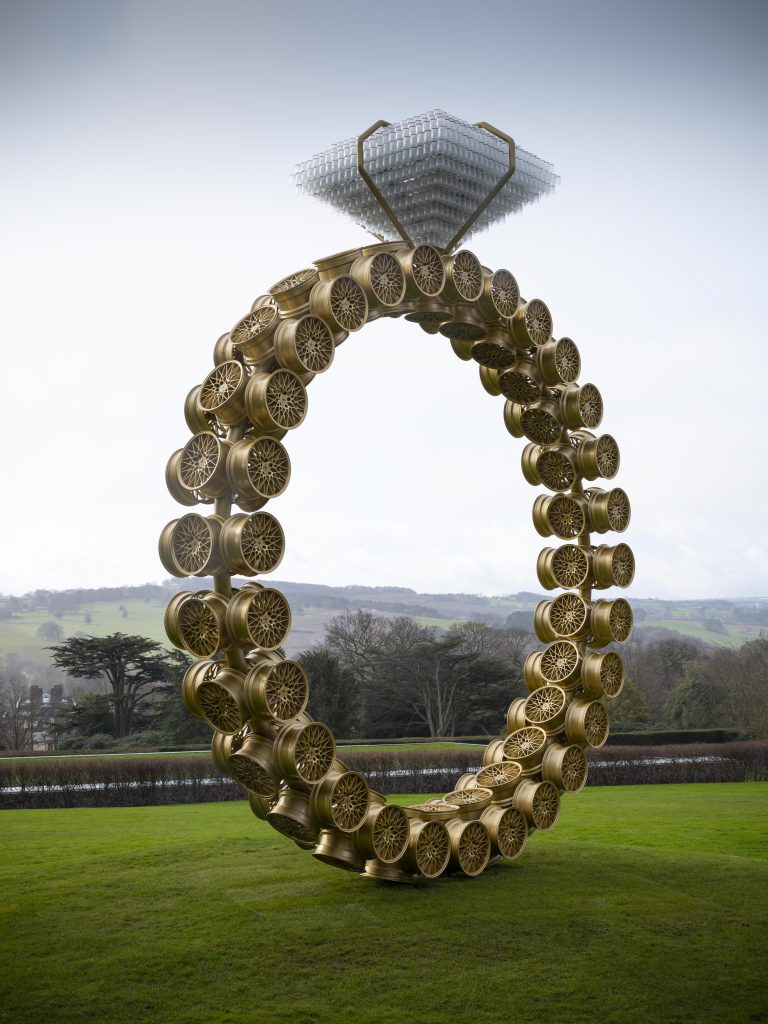 Also in the open air is Solitario, a seven-metre-high ring made of golden car wheel rims topped with a huge diamond crafted from crystal whisky glasses. Representing the stereotypical ambition of our society to acquire wealth and material possessions, the work unites symbols of luxury – cars, jewellery and alcohol – which bridge social classes. Sited at one of the highest points in the Park and drawing attention to one of the most wonderful views across the landscape, Solita?rio will entice visitors uphill and create delight in the discovery of its fabrication.

Within the Underground Gallery, the exhibition continues with works that celebrate the artist’s unbridled imagination. The monumental 12-metre-long Valkyrie Marina Rinaldi (2014), which hangs suspended
from the ceiling, is one of a series of dramatic works that represent ‘valkyries’, female figures from Norse mythology who selected warriors on the battlefield worthy of a place in Valhalla. Made from multicoloured woollen crochet, fabric and flamboyant embellishments with tentacle limbs that reach across the gallery, Valkyrie Marina Rinaldi embodies the power of these figures through a dynamic mass of texture and colour that is intended to be both menacing and protective.

Made from stainless-steel saucepans, the iconic oversized silver stilettos of Marilyn (2009/2011) comment on social conventions and highlight the division between women’s traditional domestic and contemporary public roles. Referencing Marilyn Monroe, one of the most notable American actresses to symbolise female sexuality, the work pays homage to her absent figure. Marilyn proposes a revision of femininity by drawing attention to dichotomies which play a significant role in Vasconcelos’ practice, including private versus public life, tradition versus modernity, and ‘pop’ culture versus ‘high’ culture.
These sculptures are joined by the stunning and elaborate Red Independent Heart #3 (2013). For this work, Vasconcelos makes use of the form of another well-known Portuguese emblem, the Heart of Viana, which symbolises honesty and generosity, and scales it up to over three metres high. The sculpture rotates in the gallery space and is made entirely of red plastic cutlery, which has been abstracted to such an extent that the lines between luxury and coarseness are blurred. Dramatically lit, it is accompanied by recorded Portuguese fado songs, which speak of love, loss and the conflict between emotion and reason.
Vista Interior (2000) presents as a minimalist sculpture whilst within we encounter items associated with domestic work and household cleaning. All purchased in 2000, they provide a snapshot of that time and visitors will recognize the subtle changes in design and taste over the last twenty years. Call Center (2014- 16) brings stereotypical masculinity to the fore and takes the form of an enlarged Beretta pistol comprised of 168 rotary-dial telephones. Embodying ideas of strength, power and dominance, the gun is made lyrical by Vasconcelos’ incorporation of an electro-acoustic symphony by composer Jonas Runa, which projects out from the telephones.

Vasconcelos’ incorporation of traditional Portuguese crochet with everyday objects is explored in works such as Big Booby #4 (2018), which references the ordinary household object of a kitchen potholder. Using colourful crocheted designs reminiscent of abstract paintings by Kenneth Noland and Frank Stella, Vasconcelos makes a poignant nod to domestic life. Referencing Marcel Duchamp’s famed Urinal, Vasconcelos’ Purple Rain (2017) questions notions of identity and feminises this masculine object by covering it with crochet. The disruption of our expectations of familiar objects is central to Vasconcelos’ practice and through these reconfigurations, her works confront important social and political issues, whilst maintaining humour and joyfulness.

About The Artist
Born in Paris in 1971 and raised in Portugal, the multi-lingual Joana Vasconcelos has been recognised with major exhibitions at the 51st Venice Biennale in 2005 where she displayed A Noiva (The Bride) (2001- 2005), a huge chandelier made of tampons; she was the first woman and youngest artist to present a solo exhibition in the Palace of Versailles, Paris in 2012; and Guggenheim Museum, Bilbao (2018), where she was the first Portuguese artist to present a solo exhibition.
The exhibition at YSP coincides with Wedding Cake, a major new commission by Vasconcelos for the Rose Garden of Waddesdon Manor, Buckinghamshire from 13 June 2020. @joanavasconcelosatelier