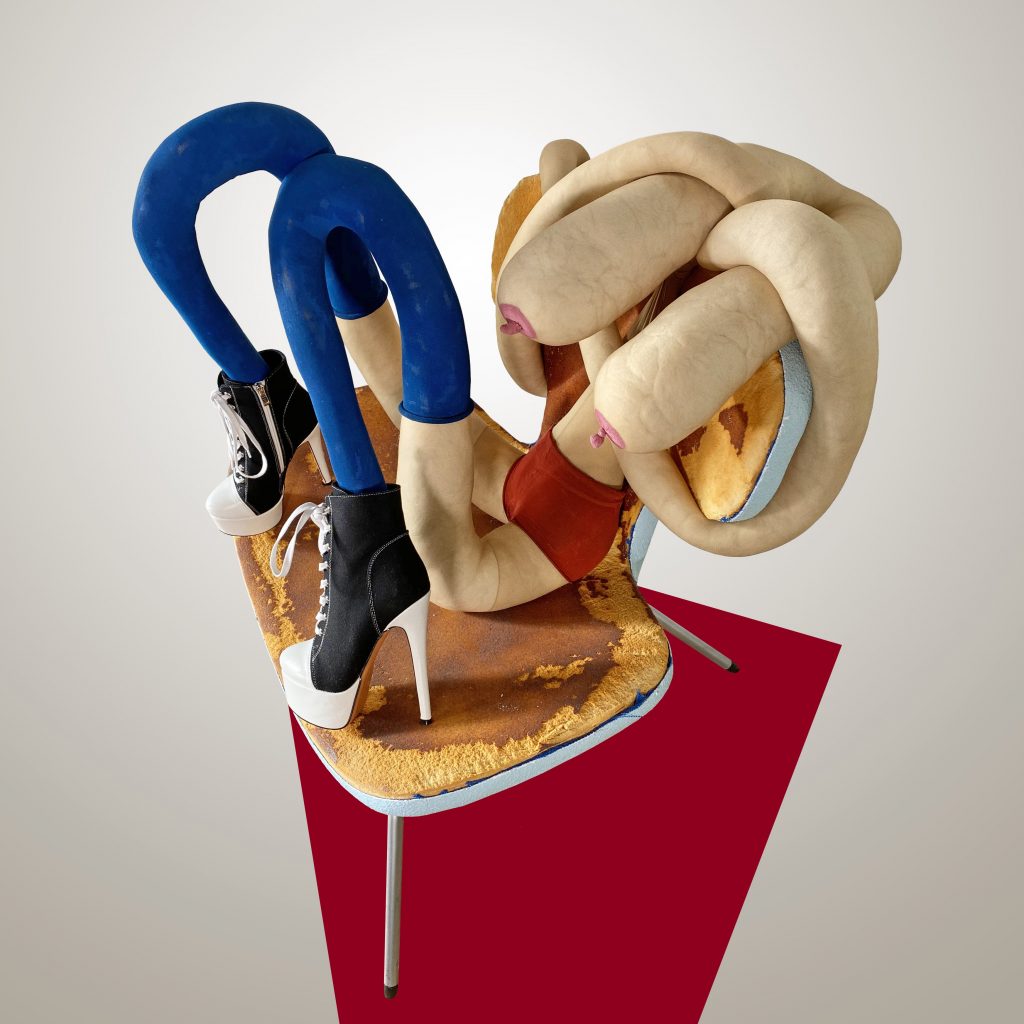 Sara Lucas’s exhibition HONEY PIE will consist of five sculptures made from stuffed tights and found objects, alongside an equal number of works in bronze and concrete. First conceived in 1997, Lucas’s Bunny sculptures evoke female nudes reclining on chairs in states of abandon and vulnerability. Employing the same everyday materials, the soft sculptures in HONEY PIE develop this formula through anatomical contortions, flamboyant footwear and chairs of eclectic shape and size. Bright colours applied to the figures’ limbs give them the appearance of a surrealist chorus line, at once exotic and comedic. Lucas has elevated the works on a series of plinths that reinforce their individualism, resetting the balance of power between sculpture and viewer. 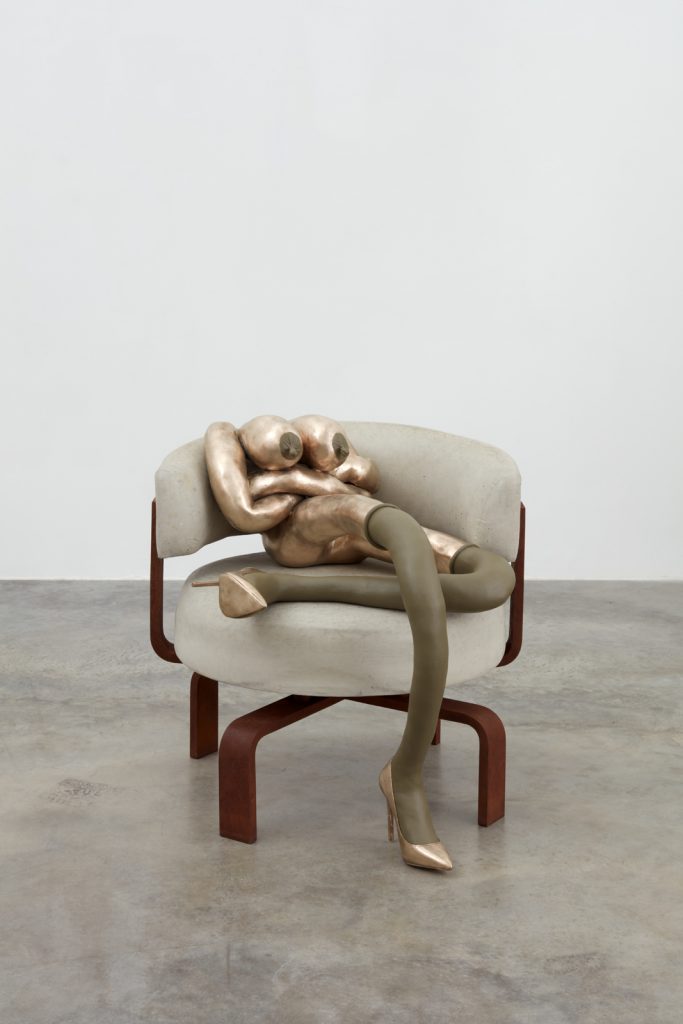 Lucas’s soft sculptures are mirrored in five bronze and concrete works. Employing the same figure-chair composition, these stand in striking contrast to the fleshiness and bold colour of the soft figures – as if animate bodies have transmuted into statues or icons. Cast from soft prototypes, the hard sculptures consist of polished bronze anatomies – extruded, tubular forms with high-gloss surfaces – each posed on top of a chair rendered in concrete and metal. “They’ve got more of a ghostly quality – like something left over from another age,” Lucas has stated. “It’s a mixture of the hard and the soft, and the colourful and the austere.”

Lucas has arranged the sculptures within a cruciform structure of concrete and MDF that splits the gallery into quadrants. In their style of presentation as much as their rhyming forms, the works look back to earlier shows such as Bunny Gets Snookered at Sadie Coles HQ in 1997 (where the Bunnies were scattered around a snooker table) or NUDS in 2009, where she first began to use plinths in the form of breeze block stacks. In the new show, plinths in various shades of yellow compound the painterly aspect of the sculptures. In contrast to the literal debasement of the original Bunnies (most of which were placed on the floor), the plinths raise the works to eye level or higher, amplifying the swagger and exuberance of Lucas’s cast of characters.

These attributes are reflected in the works’ titles. DORA LALALA resembles a contortionist winding her legs into a bow; SUGAR consists of a bouquet of breasts on nimble pink legs. The chairs and shoes are themselves multifarious in design and import – from the scrolling campery of an ironwork seat to the hyperbolic femininity of platform boots. At the same time, Lucas’s soft and hard muses continue to channel themes that have defined her work from the beginning – whether the anthropomorphic charge of found objects, the objectification of the female nude, or the elusive line between comedy and abjection.
The exhibition follows Lucas’s first retrospective in China, at the Red Brick Art Museum, Beijing, in 2019, and her first US retrospective at the New Museum, New York, in 2018 (Au Naturel, curated by Massimiliano Gioni and Margot Norton), which travelled to the Hammer Museum, Los Angeles in 2019. A concurrent presentation will be on view at Gladstone Gallery, New York, opening 06 March 2020.

About The Artist
Sarah Lucas (b. 1962, London) studied at the Working Men’s College (1982–3), London College of Printing (1983–4), and Goldsmith’s College (1984–7). She has exhibited internationally since coming to prominence in the 1990s with solo shows Penis Nailed to a Board, City Racing, London (1992) and The Whole Joke, Kingly Street, London (1992), followed by a presentation in 1993 at MoMA, New York. In 2005 a touring retrospective took place at Kunsthalle Zu?rich, Kunstverein Hamburg and Tate Liverpool. In addition to her recent retrospectives in China and the USA, major exhibitions in the last decade have included Sarah Lucas: Good Muse, Legion of Honor, San Francisco (2017); POWER IN WOMAN, Sir John Soane’s Museum, London (2016, travelling to Humber Street Gallery, Hull in 2017); I SCREAM DADDIO, British Pavilion, 56th Venice International Art Biennale, Venice (2015); Tramway, Glasgow (2014); NOB + Gelatin, Secession, Vienna (2013); and SITUATION Absolute Beach Man Rubble, Whitechapel Gallery, London (2013, accompanied by an extensive catalogue). She lives in Suffolk.

In conjunction with Sarah Lucas’s show ‘HONEY PIE,’ the artist and Bella Freud have embarked on their first collaboration, making four designs on outsize, one-size-fits-all white t-shirts featuring Lucas’s iconic figurative sculptures on the front and Freud’s text on the back. The collection launches alongside Lucas's latest body of works, presented as part of ‘HONEY PIE,’ a new exhibition opening today at Gladstone 64 in New York, followed by Sadie Coles HQ in London on March 16. The collection of t-shirts will also be available at CFA Berlin and BellaFreud.com Swipe through to see all four t-shirt designs!