David Hockney's portrait of Ed Sheeran to be shown in London exhibition for the first time. - FAD Magazine
Skip to content 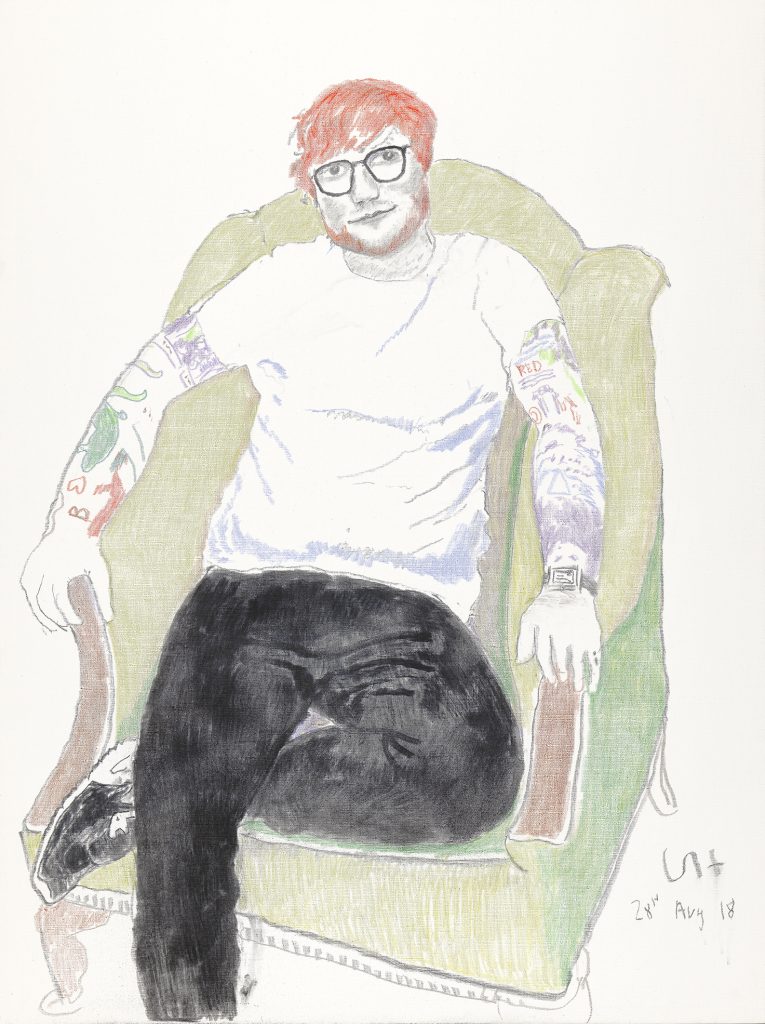 An exhibition of portraits by David Hockney entitled Video Brings Its Time to You, You Bring Your Time to Paintings and Drawings will go on show at Annely Juda Fine Art in London. The show coincides with Hockney’s exhibition at the National Portrait Gallery which opens on 27th February 2020. 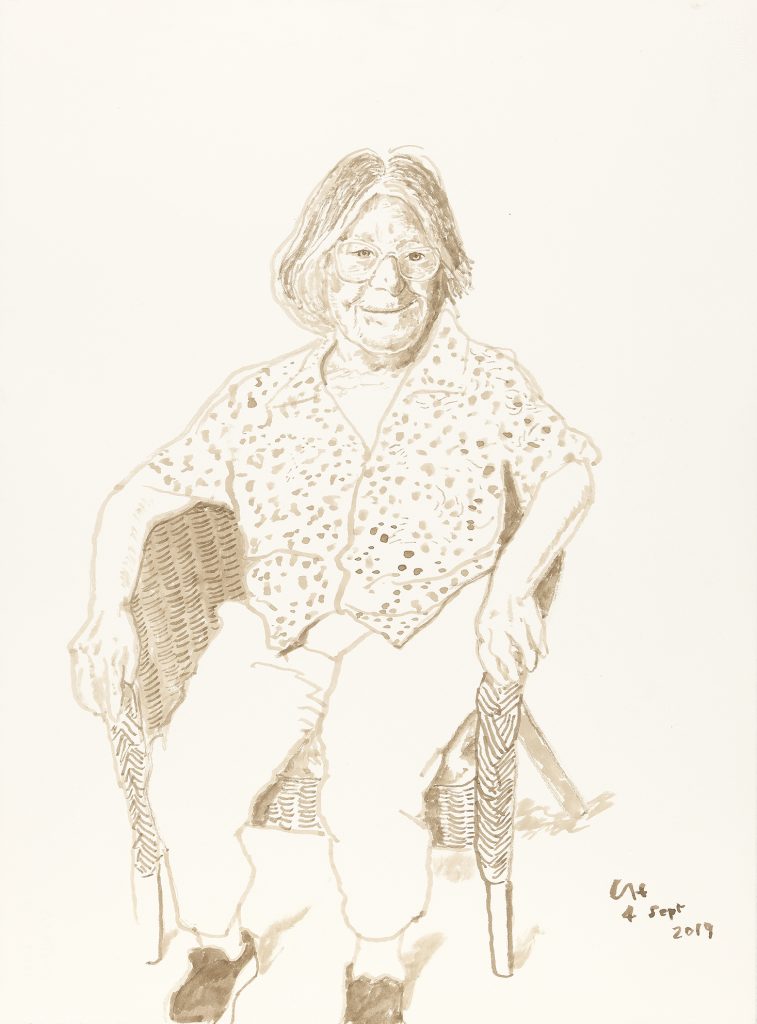 The Annely Juda Fine Art exhibition includes 18 portraits on canvas of Hockney’s friends and associates, from fellow artists to well-known musicians such as Ed Sheeran and Bruno Mars. Painted using a mixture of charcoal, crayon and acrylic on canvas, the works display Hockney’s brilliant draughtsmanship and distinctive use of line and colour. In addition, five coloured ink drawings on paper feature those such as the artist’s sister, Margaret Hockney, and Scarlett Clark, the granddaughter of Hockney’s long-time muse, Celia Birtwell. 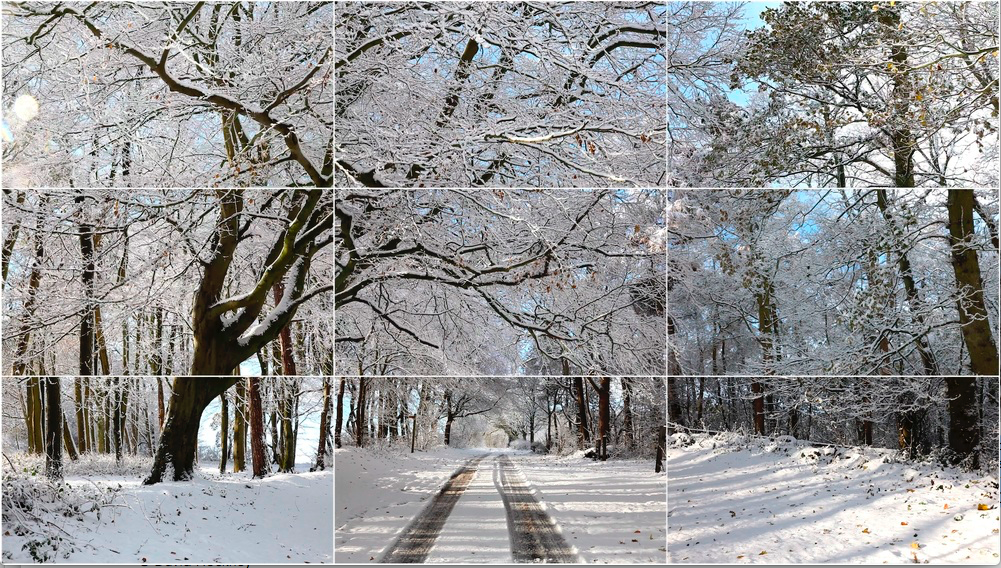 The exhibition also includes two multiple perspective videos: Woldgate Woods, Winter 2010 (9 screens) and Seven Yorkshire Landscapes, 2011 (18 screens). Filmed in Hockney’s native Yorkshire, in these videos Hockney continues his career-long exploration of single point perspective. By attaching multiple cameras to a car and driving through Yorkshire’s rural landscape, these videos are presented on multiple screens to comprise one work. In doing so, various perspectives are presented at one time. As Hockney said, this

“forces the eye to scan, and it is impossible to see everything at once. […] as in the real world you choose which objects to look at and in which order to do so.” 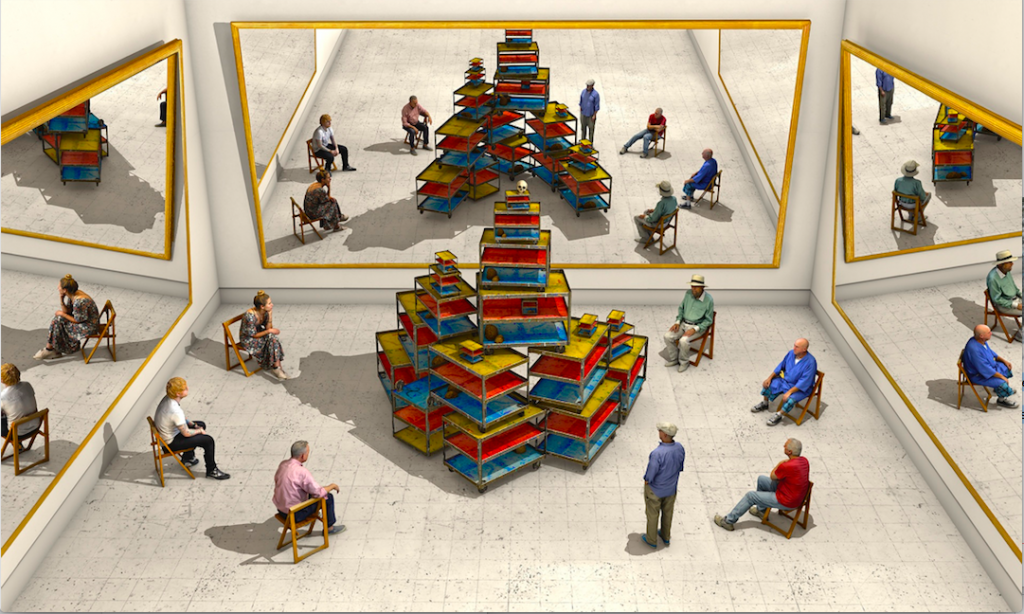 In addition to the portraits and videos, three photographic drawings will also be featured in the exhibition. Interior scenes of Hockney’s LA studio feature friends and colleagues, along with studio equipment and various elements of furniture, props and mirrors. By making composite images of photographs and paintings, Hockney amalgamates various viewpoints, deliberately altering perspective and throwing our traditional understanding of depth off-kilter.

David Hockney is constantly exploring new technological possibilities in art. He has embraced the use of the iPad, video, polaroid and photoshop as a means to create works that stand alongside his works of more traditional methods such as painting and drawing. Now in his eighties, Hockney’s investigations into how to depict more truly how we ‘see’ is unwavering and renders him arguably one of the most celebrated artists of his generation and perhaps the most recognised living artist today.

About The Artist
David Hockney was born in Bradford in 1937. He graduated from the Bradford School of Art in 1958 and studied at the Royal College of Art from 1959–62. Hockney was instrumental in the founding of the British Pop Art movement and became one of the most celebrated artists of his generation. Hockney first went to Los Angeles in 1964 and has lived there on and off since then.

This will be Hockney’s twelfth exhibition at Annely Juda Fine Art. Hockney has had solo exhibitions at museums and galleries worldwide throughout his career. More recently, a major retrospective of his work was shown at Tate Britain, London (2017); the Centre Pompidou, Paris (2017) and the Metropolitan Museum of Art, New York (2017-18). The exhibition, 82 Portraits and 1 Still Life was organized by the Royal Academy, London (2016) and travelled to Ca’ Pesaro, Venice (2017), the Guggenheim Museum Bilbao, Spain (2017-8) and the Los Angeles County Museum of Art (2018). Hockney’s solo exhibition David Hockney: Drawing from Life will be on view at the National Portrait Gallery, London from 27 February – 28 June 2020.