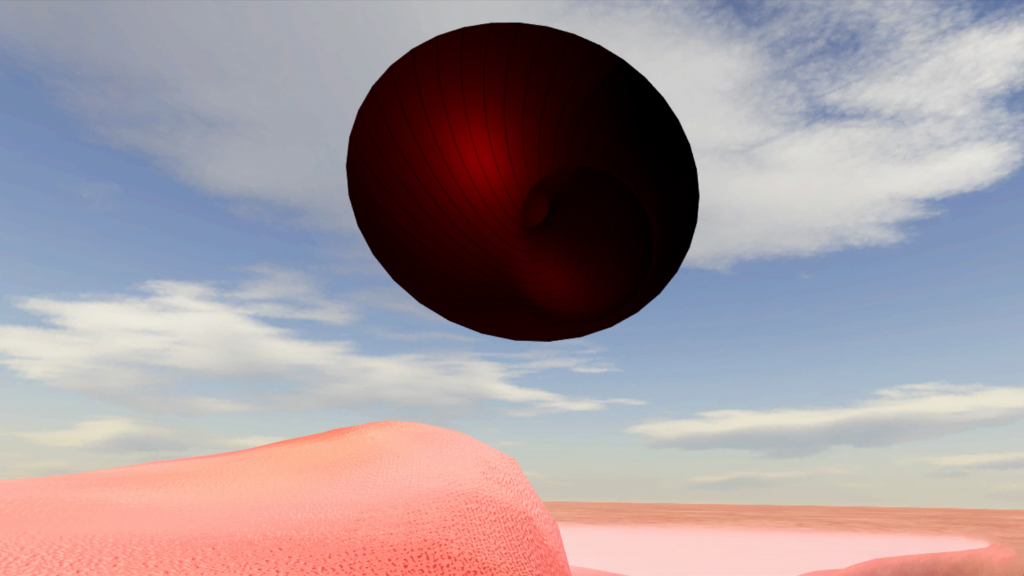 Anish Kapoor, still Into Yourself, Fall , 2018. Courtesy of Anish Kapoor and Acute Art

An exciting new collaboration between Acute Art and Waddesdon Manor will exhibit the first virtual reality artwork by the renowned British artist, Anish Kapoor in the dramatic setting of the Windmill Hill Archive on the Waddesdon estate.

Into Yourself, Fall (2018) takes users on a journey through the human body, experiencing the sensation of falling into yourself. The work seeks to simulate vertigo, depicting a labyrinth of the inner workings of the self.

Starting the journey in a forest scene, in a clearing surrounded by trees, users encounter a large black void in the ground. Users then travel through a complex series of tunnels with walls that appear to be made of sinewy flesh and muscle. With this work, Kapoor invites users to experience a surreal sensation of exploring the unknown, with viewers losing themselves in another realm.

Working with Acute Art to design this custom-made virtual space, Kapoor’s piece was developed around the idea of creating a physical experience via a virtual journey, testing the limits of what is possible with technology. Into Yourself, Fall plays with the introspective experience of wearing the headset, creating a disorientating sensation that is experienced physically by the viewer.

Kapoor’s use of virtual reality enables him to explore materiality in a virtual realm, drawing on his highly influential sculptural practice to evoke both tactility and transcendence. With a soundtrack created by the artist’s son Ishan Kapoor, Into Yourself, Fall directly transports the viewer into the artist’s own visceral virtual reality.

‘Waddesdon and the Rothschild Foundation are delighted to be working with Acute Art in showing this innovative artwork, by one of the most exciting and distinguished artists working in Britain today. Kapoor has always experimented with new forms and techniques so it is no surprise that he should be in the vanguard as a user of immersive, interactive technologies that create so much potential for art in the digital world. In recent years, we have begun to focus increasingly on the impact of new technology on art and heritage, a long-standing interest at Waddesdon where we want to look forward as well as celebrating Waddesdon’s history and traditions. This exhibition will offer our visitors something new and we hope to challenge some of their assumptions about historic houses with the presentation of this piece.’

It is also particularly pleasing and relevant that the room in which the exhibition takes place, at Windmill Hill, is dominated by one of Kapoor’s iconic creations, one of his facetted mirrored sculptures (Untitled, 2009), giving a rare opportunity to enjoy work by this major artist both virtually and in reality.

About The Artist
Anish Kapoor, CBE, RA, was born in Mumbai, India in 1954. He first gained recognition in the 1980s for his large-scale, biomorphic and geometric sculptures, created from materials including stone, pigment and resin. By the 1990s, his practice had evolved to incorporate forms that appeared to stretch, recede and distort the space around them. The approach informed major public commissions including Chicago’s Cloud Gate (2004) (colloquially known as ‘the Bean’) and Sky Mirror (2006), exhibited at the Rockefeller Center in New York City in 2006. Red pigment features regularly in his output, evoking earth, blood and the body.??Kapoor has been the subject of solo exhibitions at institutions including CAFA Art Museum / Imperial Ancestral Temple, Beijing (2019); Serralves, Museu de Arte Contemporânea, Porto, Portugal (2018); Museo d’Arte Contemporanea, Rome (2016), Château de Versailles, France (2015); the Museum of Contemporary Art, Sydney (2012), and the Royal Academy of Arts, London (2009)). His public commissions in the UK include Orbit (2012), a permanent artwork for London’s Olympic Park, and Temenos (2010), in Middlesbrough. Kapoor represented Britain in the 44th Venice Biennale in 1990, where he was the recipient of the Premio Duemila Prize. In 1991, he received the Turner Prize and, in 2002, received the Unilever Commission for the Turbine Hall at Tate Modern. Kapoor has lived and worked in London since the early 1970s, where he studied at Chelsea School of Art and Design.