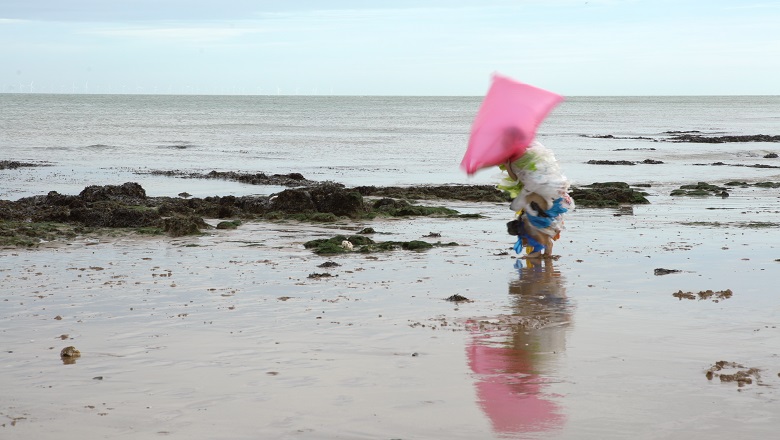 The Lost Girl is a new immersive film-based installation at King’s College London. Created by artist and King’s academic Kate McMillan (Department of Culture, Media & Creative Industries within the Faculty of Arts & Humanities), the project explores various research interests including climate change and the Anthropocene, a proposed geological epoch dating from the commencement of significant human impact on Earth’s geology and ecosystems, including, but not limited to, anthropogenic climate change. The project also explores the role of creativity in forming memory and the consequences of neglecting female histories.

Using the DH Lawrence book of the same name as a starting point, the film depicts the experience of a fictional cave-dwelling girl living on the coast of England. Bereft of other people, the film narrates the experiences of this character seemingly alone in a dystopian future, set within a future-time which suggests the decimation of civilisation as we know it. Without language and prior knowledge, the young woman must make sense of her existence only through the debris washed up from the ocean to form meaning and language.

Visitors can also expect to encounter objects and debris depicted in the film in the exhibitions space. These include a fire engine horn fashioned into a musical instrument, a handmade navigational device used to teach sailors how to understand ocean signalling systems, bits of wire, string and rope. These are the material afterlife of key tenets of Western human civilization and progress: ingenuity, exploration, the mastery of nature, and the attainment of knowledge. An abundance of plastic matter (including the character’s dress made of plastic bags) acts as a reminder of our own world – a place in which each minute sees a truckload of waste plastic enter the ocean.

A percussive soundscape created from the objects on display has been composed by James Green, a King’s graduate, in collaboration with McMillan.

The project will include a programme of events and commissioning of new writing & music exploring the Anthropocene, women’s histories and memory-making including a symposium on 30 January- more details here.

The Lost Girl is an exhibition by Kate McMillan, lecturer in the Department of Culture, Media and Creative Industries at King’s College London with funding from the Australia Council for the Arts; Arts Council England and the Arts & Humanities Research Institute at King’s. The protagonist in the film, which was shot at Botany Bay in Kent, is played by 13-year-old actress, Luna Walsh Le Pera

About The Artist
Kate McMillan lectures in the Department for Culture, Media and Creative Industries at King’s College, London. She has also guest lectured at The Ruskin, Oxford University. Her PhD is currently being developed into a book called ‘Contemporary Art & Unforgetting: Methodologies of Making in Post-settler Landscapes’, published by Palgrave Macmillan in 2018.

McMillan‘s artistic practice incorporates a range of media including sculpture, film, sound, installation, textiles and performance. She is interested in the linking narratives of forgetting and place, often focusing on the residue of the past. Her artworks thus act as haunting memory-triggers for histories and ideas that are over-looked. McMillan‘s work is held in private collections around the world, as well as in the Christoph Merian Collection, Basel; Soho House Collection, London; The Ned 100, London; Art Gallery of Western Australia; Wesfarmers Arts Collection; KPMG; Murdoch University, Australia; University of Western Australia and Curtin University, Australia. www.katemcmillan.net

The Department of Culture, Media & Creative Industries within the Faculty of Arts & Humanities is a vibrant, research-led department exploring the relationship between culture, media and the creative industries. Their work includes mapping and understanding the origins of culture, the development and evolution of the media, and the power of the creative industries. Academic staff are drawn from a variety of disciplines across the arts, humanities and social sciences, focusing their collective expertise together from a range of complementary and converging viewpoints.