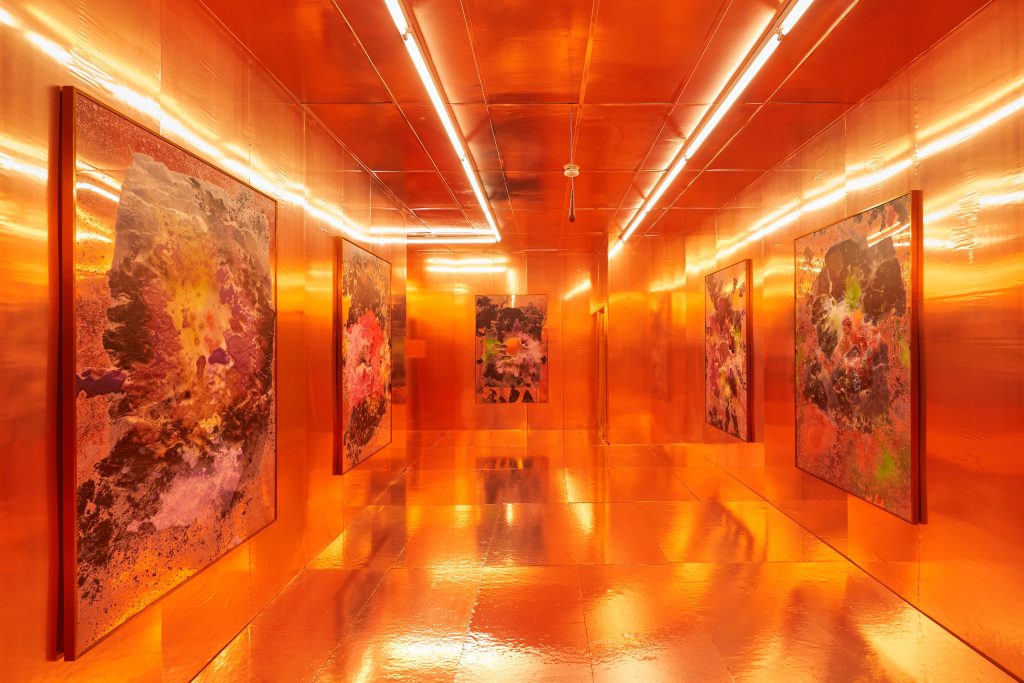 Colony Sound represents the latest chapter in the artists’ cinematic San San Universe. This episode is focused on a set of relationships surrounding the evolution of an obscure 20th century communication system known colloquially as The Smile. The previous chapter, A Cell in The Smile, which is buried in an underground bunker somewhere in Ohio, begins the story in the technoscape of cold war California. This is the era when paranoid scientific achievements ushered in several new stages of unreality. Aerospace, microchips and the entertainment industry all flourished in the heady days of post-war West Coast. Colony Sound picks up as the hybrid fruits of neo-biological technology are appropriated by emergent sub-cultures in an attempt to remake society.

Freeman & Lowe riff on the historical narratives surrounding The Smile to create a sprawling architectural intervention that oscillates between the habitats of the counterculture and the sites of technological invention. Their new presentation will mark Freeman and Lowe’s UK debut – a series of eleven rooms ranging from a telecommunications retail outlet to a half-incinerated recording studio; a copper room used to shield occupants from electromagnetic waves and a shopping arcade-turned-youth-hangout constructed of homemade ceramics. Within these environments are multiple series of art objects that reposition the matter of The Smile and its cultural byproducts in purely physical and spatial terms. The objects and environments drain the illusory and confront the visitor with the material edge of media technology. 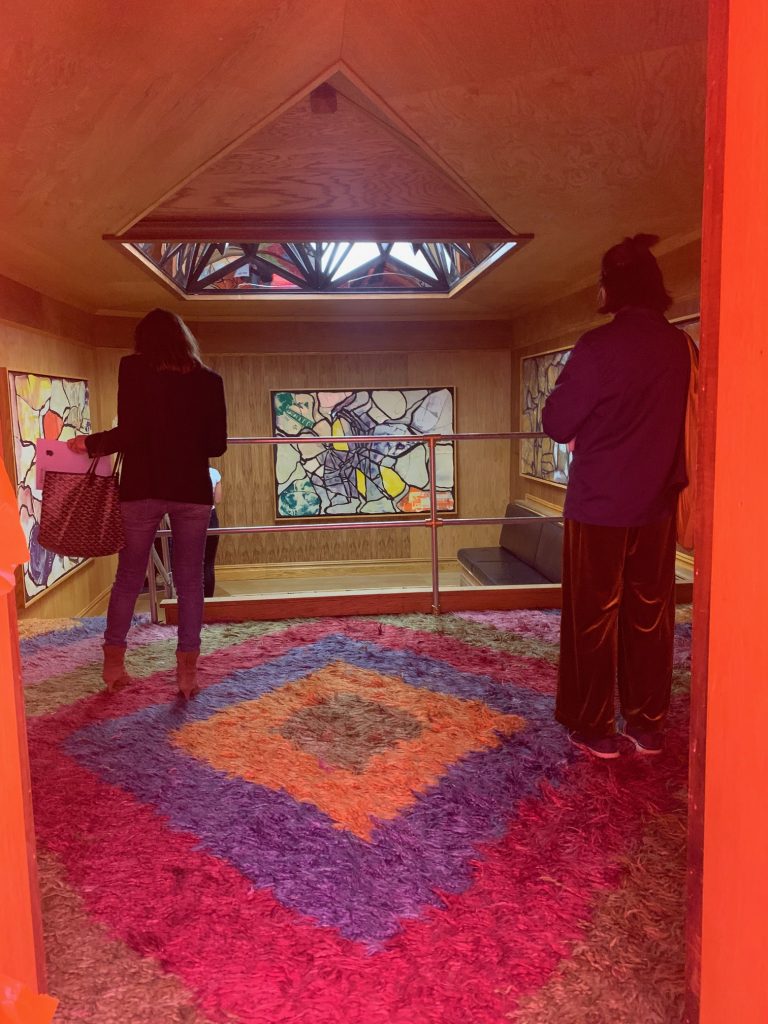 “Scientists at Bell Labs invent a plant-based transistor that can transmit a full spectrum of electromagnetic waves. A shopping mall is turned into a transient youth dwelling. A dub remix of mind control experiments reaches number 23 on the billboard charts. The Smile/ Net Shopping Forum starts “The Bohemia” division that specializes in “food installation”, “networked ceramics” and “fiber entertainment”. The Metrovision media conglomerate launches “Through a Glass Darkly” the first augmented reality game set in an Ikea showroom. These are a few of the details within the orbit of The Smile, the first communication system built from a flowering bacterial colony. The inventors originally intended The Smile as a transmitter of top-secret Psychic Driving experiments; but when the objectives of the Cold War began to zigzag, The Smile and their bunker laboratory were abandoned. After decades of dormancy the system is resurrected and repurposed by the immigrant communities of the Malibu Colony. The Smile becomes the first alternative telecommunication network. Electromagnetic sound loops are transmitted throughout the underground parties taking place in abandoned shopping malls along the Pacific coast. This is a new kind of Psychic Driving; a voluntary submission to auditory hallucination. As the popularity of the sound system subculture spreads worldwide, The Smile is vacuumed up by the twisted fantasies of international wellness corporations. This is the evolution of The Smile: atomicage paranoia morphed into new-age hypnosis.” 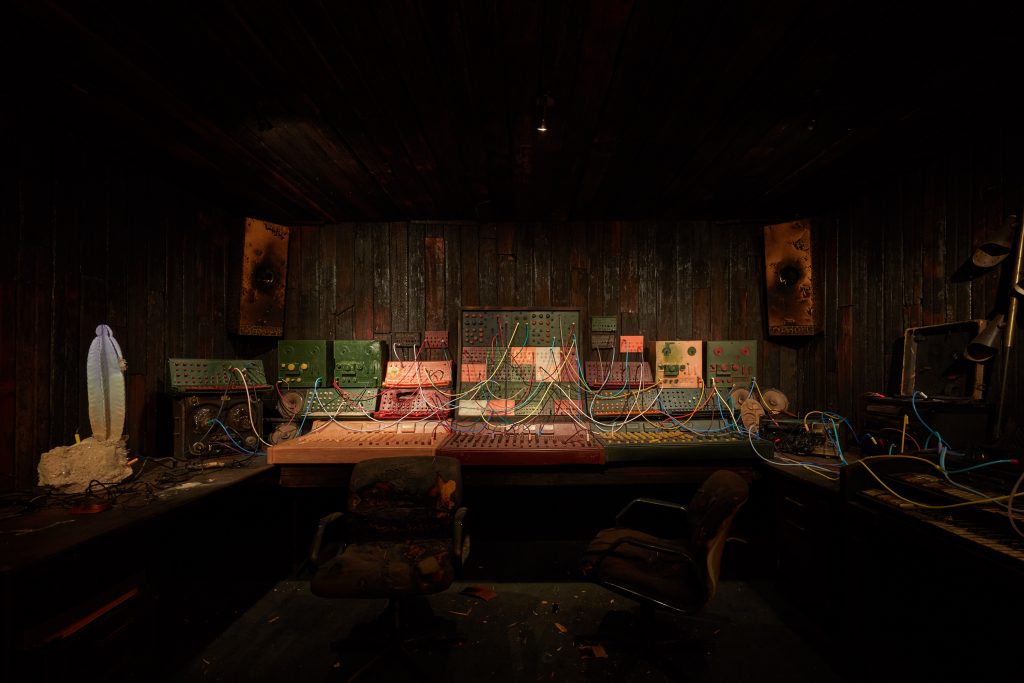 ‘Psychic Driving was originally a clinical term for a psychiatric technique that used looped audio messages as a method to reprogram a subject’s identity. Depatterning, as they called it, was for a short moment the ideal weapon in the war of the mind. The Smile was developed as the first biological network to be used for mass transmission of Psychic Driving. In their bunker laboratory, they managed to synthesize a terrestrial and aquatic vegetative network that could transmit a full spectrum of electromagnetic waves. The organic substrate of The Smile made the electromagnetic signals impossible to hack and infinitely more stable than traditional electronic methods. This was the first biological telecommunication system. Shannon and Smiley called the technology Mycotecture and stated that “The Smile will connect the central nervous system of all humans into a global communication network where the separations between biology, technology and the landscape will be imperceptible.”Their vision was never achieved. Psychic Driving was deemed unreliable and The Smile was abandoned and would remain dormant for decades before it was resurrected in a beachside slum. Colony Sound first emerged as a youth gang in the Nippono-Caribbean immigrant communities of the San San. They repurposed The Smile as a method of transmission for the sonic-fictions that undergirded the diasporic population. Unearthed in the very bunker where it was first conceived, the founding members of Colony Sound, Farmer Kintaro and R.F. Saxon, discovered The Smile’s ability to transmit inaudible and unknown sound vibrations with pristine fidelity. This allowed them to lay the pipes for a pirate media state. Before long global subcultures would pervert and remix the paranoia-inspired achievements of The Smile into new forms of youth rebellion; music, individuality and alternative lifestyles.

As these subcultures seeped into the mainstream The Smile becomes the vehicle for the 21st-century marketing of total leisure environments and affirmation capitalism. The original Colony Sound and the abandoned shopping malls were dissolved into a new real estate development called The Glass Field. In this new urban ecology, The Smile becomes the telecommunication network for a deranged wellness program. Human potential manifested in the architecture of leisure. The Glass Field is the city as a sprawling resort. A sequence of brutalist pleasurescapes designed for total withdrawal. Each interior space of The Glass Field functions like an island seemingly separate and self-contained. These islands are then connected through The Smile which brings a seamless exchange of fantasies. The passage from one island to the next plays out like a stream of consciousness montage.’

Preview: Kiss Me Deadly, a group show of new art from Los Angeles at Paradise Row

Kiss Me Deadly, a group show of new art from Los Angeles.