A leading pioneer of the Pop Art movement, Roy Lichtenstein’s innovative use of the brushstroke, reducing the form of the painted stroke to its simplest expression, led to a new visual language which he elaborated to reach new heights in the 1980s. Engaging with a new subject matter, the brushstroke-form, Lichtenstein refined and reinterpreted the techniques and palette of his iconic Pop style. 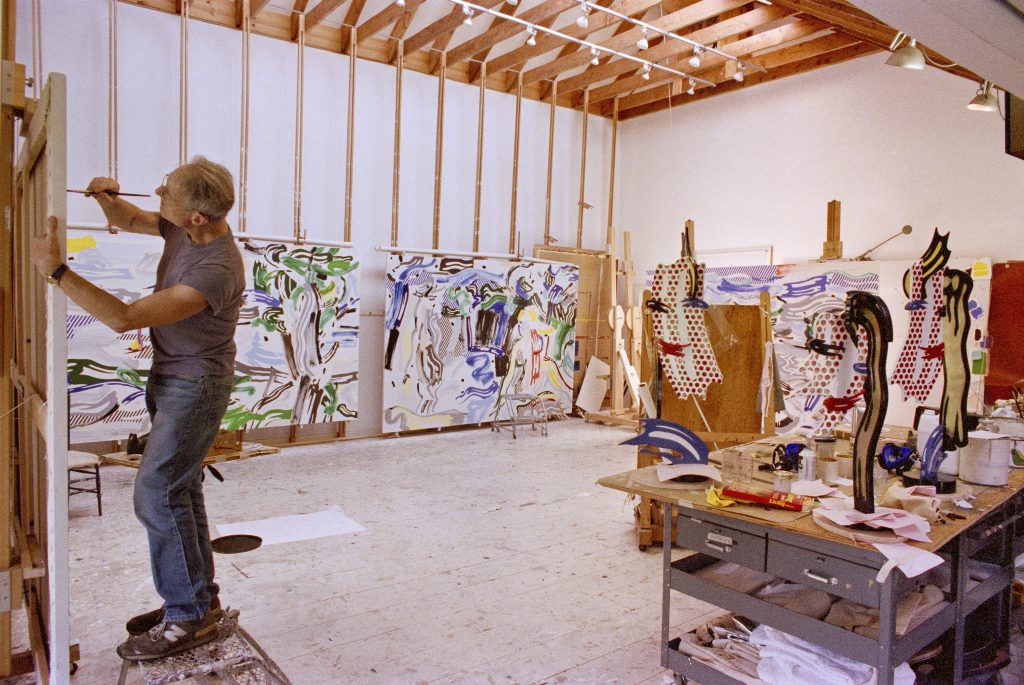 Archival image of Roy Lichtenstein working in his Southampton studio with works featured in the exhibition,1987.
Photographed by Bob Adelman. Paintings from left to right: River Scene, 1987; Artemis and Acteon, 1987; Left sculpture: Brushstroke Head I, 1987

The Loaded Brush at Galerie Thaddaeus Ropac Salzburg, an in-depth exhibition focusing on this seminal period of Roy Lichtenstein’s career which follows numerous historic and institutional shows in the United States, brings together rarely seen works that span major figurative and abstract paintings, sculptures, collages and drawings. Together, the brushstroke sculptures and paintings constitute a significant portion of the artist’s oeuvre and demonstrate some of the guiding interests of Lichtenstein’s ongoing artistic development across a variety of materials. 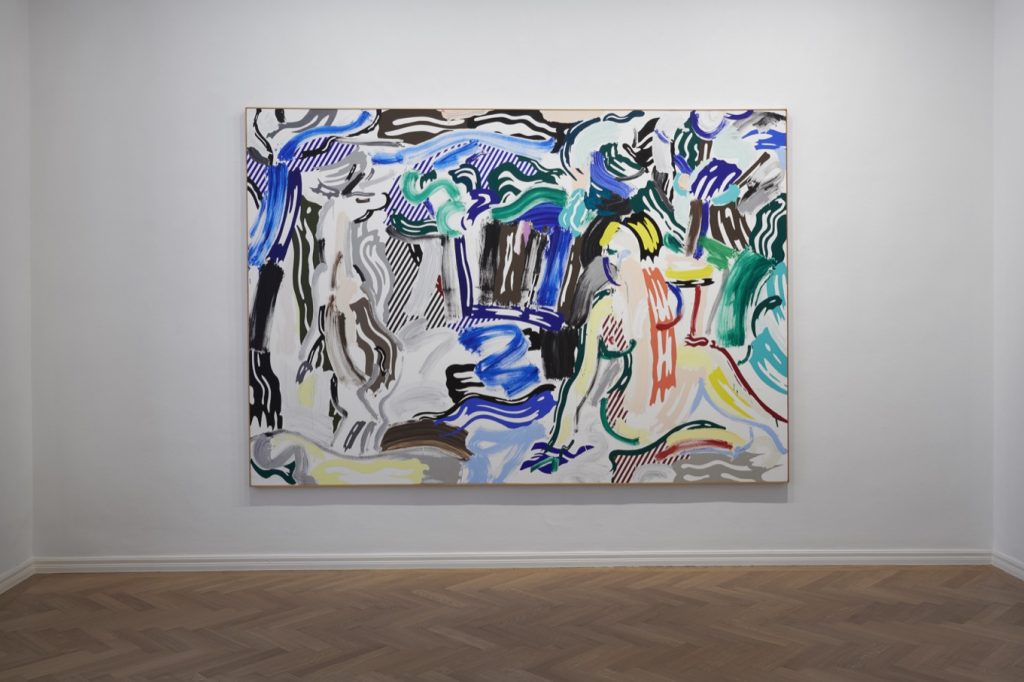 A highlight of the exhibition, now exhibited for the first time in Europe, is one of Roy Lichtenstein’s most daringly expressive works: Artemis and Acteon (1987), inspired by Titian’s masterful rendering of the Greek myth painted in 1556–1559.

Executed with superb craftsmanship, Lichtenstein’s painting is characterised by its celebrated subject matter, rich colour contrasts and rhythmic brushwork, a combination shared only by Lichtenstein’s most iconic Cartoon Brushstroke Figure works of the 1980s. A flawless union between the classical, the modern, and the contemporary, Artemis and Acteon is an outstanding example of Lichtenstein’s timeless engagement with the history of art, demonstrating his remarkable ability to bring together past historical styles and pave the way for conceptual commentary on painting itself. 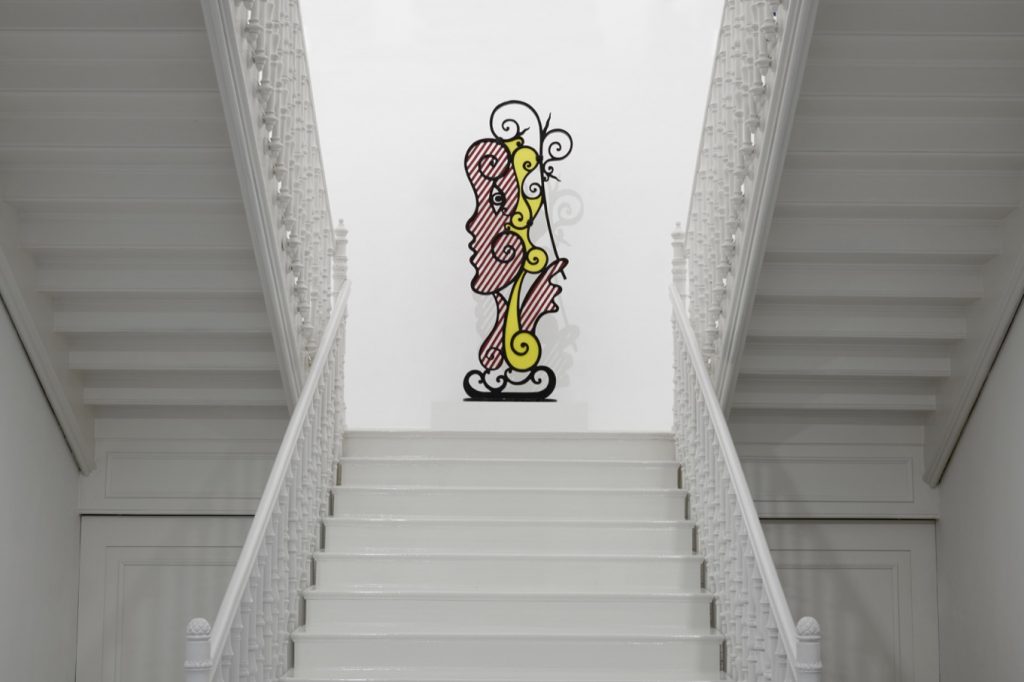 It [the Brushstroke] was the way of portraying this romantic and bravura symbol in its opposite style, classicism. The Brushstroke plays a big part in the history of art. Brushstroke almost means painting or art. Roy Lichtenstein, 1991

Lichtenstein extended these technical explorations beyond figurative subject matter to develop a number of iconic landscape paintings, such as the major piece dating from 1987, River Scene. Completed towards the end of the decade, River Scene moves further into the realm of abstraction whilst retaining its communicative power. Through his daring presentation of both narrative subject in Artemis and Acteon and traditional landscape in River Scene, Lichtenstein challenged audiences to re-engage with classical subject matter, revitalised by his innovative brushwork, just as his celebrated Benday dot works recast images drawn from commercial art. By isolating elements of the overall composition, Lichtenstein highlights how they work together on the painted plane, addressing the relationship between vision, perception and image, and revealing the fundamental function of the brushstroke in figuration.

Traditionally understood as showing great technical skill and brilliance of execution, Roy Lichtenstein’s ‘bravura’ is evidenced through a number of previously unseen works on paper included in the exhibition, complementing and elaborating upon the artist’s canvas paintings either as direct preparatory studies or independent explorations of the painted stroke, displaying a unique deftness of hand and attentiveness to form that sets him apart from his peers.

It was through Roy Lichtenstein’s ‘bravura’ that he invested his simplified subject matter with a rhythm and energy that enabled him to extend his flattened brushstrokes beyond the canvas, through the three-dimensional, and into the monumental. Moving beyond the plethora of techniques used in his painted explorations and into the realm of sculpture, he composed a number of free-standing, three-dimensional brushstroke pieces throughout the 1980s which took the form of medium-sized works, such as Endless Drip (1995) and eight further sculptures featured in the exhibition, as well as his public sculptures executed at ambitious scales. 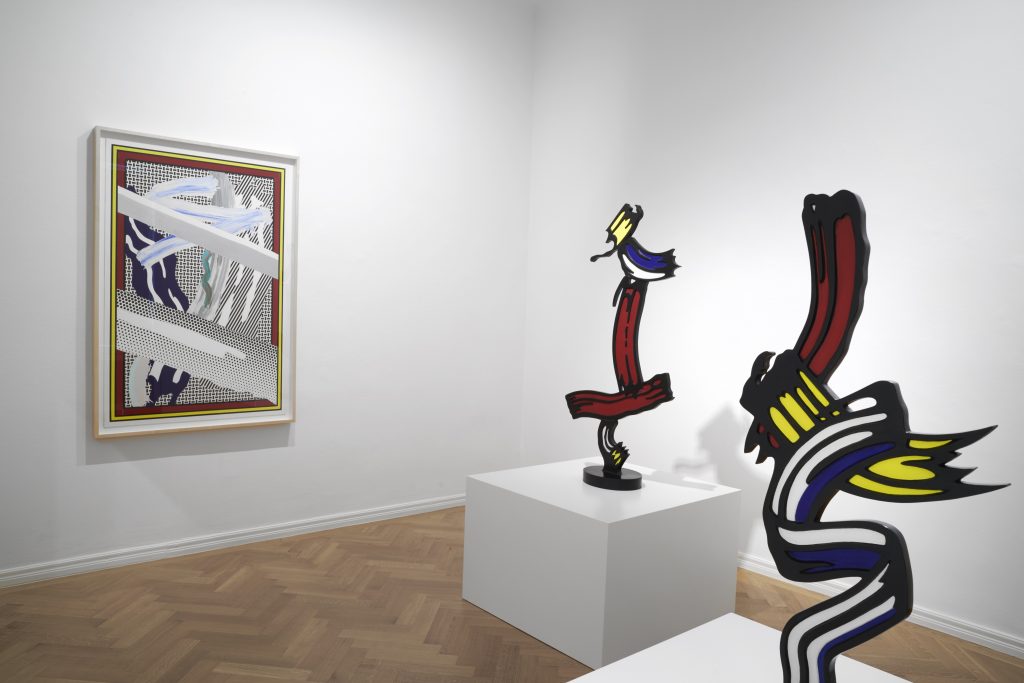 About The Artist
Roy Lichtenstein (1923-1997) first came to prominence in the early 1960s through large-scale paintings that drew upon the visual repertory of popular culture, in particular comic strips and advertisements. The artist painted by hand, and later using a perforated screen, to mimic the Benday dots used in commercial printing to convey colour gradation and texture, blurring the distinctions between ‘high’ and ‘low’ culture in both form and content. Lichtenstein also ventured beyond comic book subjects, looking back at his art-historical predecessors in paintings that reference Cézanne, Mondrian and Picasso, as well as still-lifes and landscapes.

By the late 1960s, Roy Lichtenstein’s work had become more abstract, exploring the nature and expressive possibilities of the brushstroke itself – this fundamental component of painting came to the fore as a subject in its own right across both paintings and sculptures. Over the following decades, he further probed questions of formalism and abstraction in his Mirrors series (1969–79), evoking the effects of light and shadow on glass, and the Entablatures (1970–76), which investigated similar phenomena using Beaux-Art architectural forms. Lichtenstein also created pioneering painted bronze sculptures that subverted the medium’s conventional volume and mass, functioning instead as flat lines in space. In the 1970s, Lichtenstein expanded his palette beyond red, blue, yellow, black, white and green, as well as combining invented and found images. Having created his first public mural in 1963, Lichtenstein intensified these efforts in the 1980s and 1990s, painting murals and installing monumental public sculptures in cities across the US, as well as in Europe, Israel, Japan and Puerto Rico.

In accordance with the wishes of the artist and his family, the Roy Lichtenstein Foundation was established in 1998 to facilitate access to his work and that of his contemporaries, and to establish a catalogue raisonné of his works, which is an ongoing project.

Roy Lichtenstein’s first solo show was in 1951 at Carlebach Gallery in New York, but it was his debut exhibition at Leo Castelli Gallery a decade later that brought him wider recognition in the art world. In 1963, his works were displayed alongside those of Jim Dine, Jasper Johns, Robert Rauschenberg, James Rosenquist and Andy Warhol in the seminal Six Painters and the Object exhibition at the Solomon R. Guggenheim Museum, New York. In 1966, Lichtenstein was among the five artists representing the USA at the Venice Biennale, followed by his first European retrospective at the Stedelijk Museum, Amsterdam. His work has been exhibited in major retrospectives at the Guggenheim Museum (1969 and 1993); the first drawings retrospective by a living artist at The Museum of Modern Art, New York, in 1987, which toured to museums across Europe; and a 2012-13 retrospective organised by the Art Institute of Chicago and Tate Modern, London.

Since 1992, Roy Lichtenstein’s work has been included in seven group exhibitions at Galerie Thaddaeus Ropac Salzburg and Paris. The 2019 exhibition Roy Lichtenstein: The Loaded Brush, focusing on his works from the 1980s, marks the artist’s first solo show at the gallery.