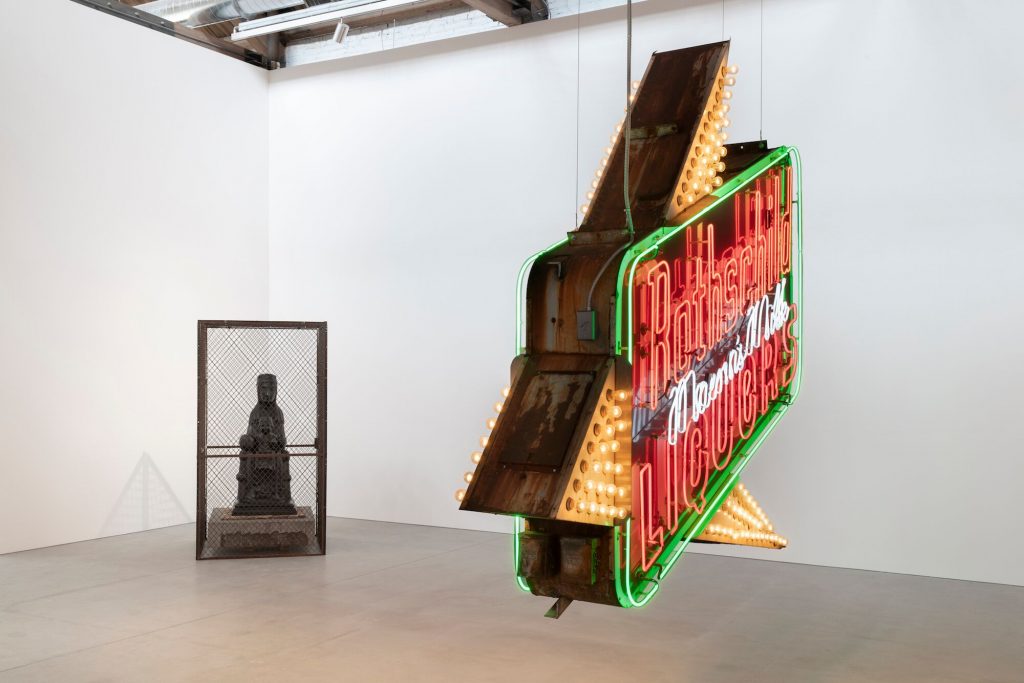 What results from urban planning, social practice, and a hunger for change? Theaster Gates at Richard Gray may be it. The latest exhibition from the Chicago based artist emphasised the intersection of fine art and social progression. Every Square needs a circle is a multimedia exhibition integrating sculpture, film, and paintings. While known for his social practice foundation in his work, Gates showcases architectural influences from the City of Chicago while evoking the African-American experience.

Gates gained vast recognition after his 2010 Whitney Biennial piece, an outdoor retreat he constructed from wooden boards. The show’s intention is an extension of what his overall practice aims to achieve, bridging the gap between art and society through creating cultural neighborhoods, and establishing social and political change. Policy bolsters this exhibition. Gates is a cultural agent as he displays a conceptual narrative of Chicago’s past, present, and future. His work is abstract but also deliberate, each piece in the show conveys a clear contribution to the conversation of the black experience in Urban community and the influence that capitalism and American culture has had on them. Each object conveys the bedrock of urban life linage, economics, culture, and suffering, which, for Back Americans have been inevitably integrated. 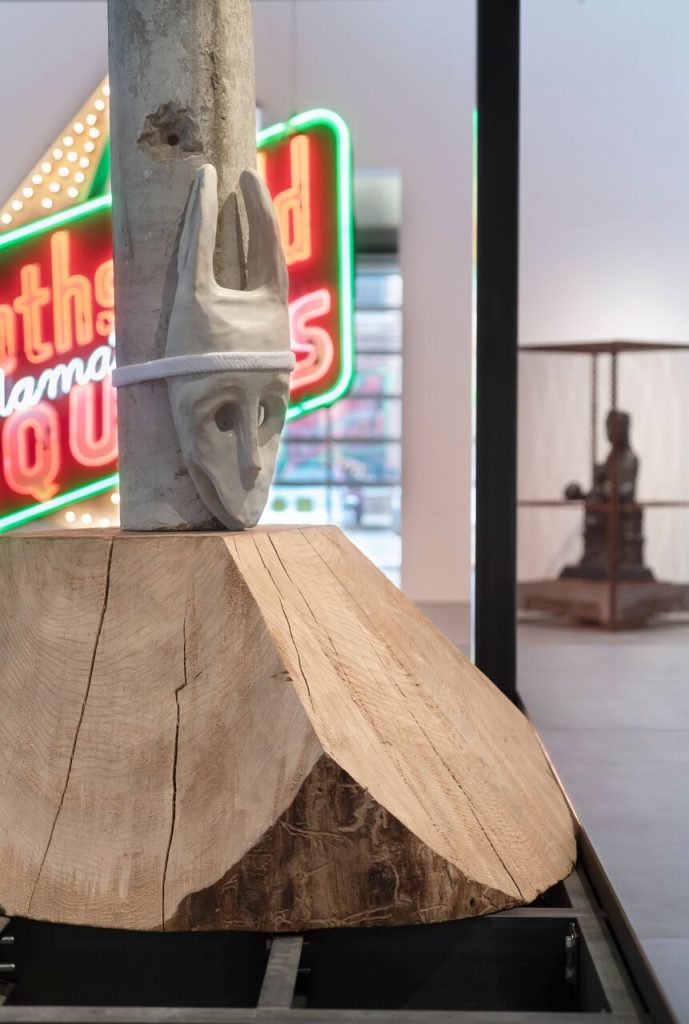 The neon sculpture, Progressive Mill, 2018 expands on W.E.B Du Bois’s influence on Gates work. Du Bois’s philosophy on both urban planning and policy have been influential for Gates,  and thus Gates utilizes the data for a series of minimal neon works that rethink them. We see the influence from “Proportions of Whites and Negroes in the different classes of occupations in the United States”, a red and black graph that compares African-Americans to Whites in regards to their occupation. Through Du Bois’s studies, he was trying to reveal the facts of Black Progressive to his white counterparts. The outer rim of the sign is illuminated with white light, while the black part of Progressive Mills appears as a foundation to both the red and white neon lights. The black center relays an underlying inequality that still exists questioning the progression of society.

The portrayal of these statistics on Black Americans in the form of neon signage speaks to a deeper commercial layer and the influence of commercial outlets on urban communities. More often than not these communities are targeted with loud signage that advertised unlikely benefits, preying on economic fears and hopes of these communities. The basic shape of Progressive Mill has broader meanings relating to the metaphor of a cycle and repetition. The basic shape of the wheel also brings up the physical implications of labour and the relationship between human value and land development. Understanding that each colour in Du Bois drawing signified a statistic Gates recreates this.

His integration of ceramics in his black madonna sculpture addresses the social perceptions of the medium and its historical exclusion from the “high art” canon. Its title, “Alls my life I have to fight,” is a direct attribution to Pulitzer-prize winning rapper Kendrick Lamar’s “Alright”, a Black uplifting song that makes reference to The Color Purple. Throughout history, Black Madonnas have been worshipped, and have been the end goal of pilgrims. While in Gates’ Black Madonna she is caged, he is exposing the foundations of our cultural norms of religious figures. He is challenging and confronting the viewer of the social norms of color and figures in society. Through this iconic figure Gates creates an insatiable hunger to learn more about the Black Madonna and publicly reflect on the power of black women. 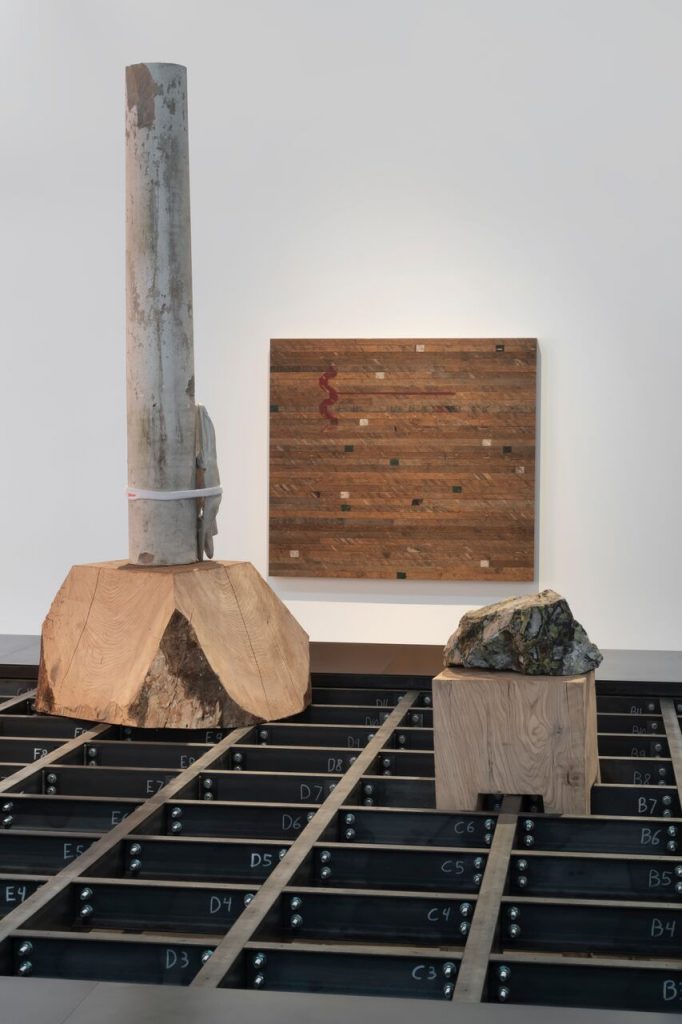 Gates uses the gallery as a platform for social intervention through directness with the spectator. Moving further into the gallery is a vintage Rothschild liquor sign, a signature one of Chicago’s chains (now closed). The sign is placed at eye-level which is a different perspective than most neon advertising signs. On the contrary, warning signs are often placed in this same plane which leads to the question of what is not apparent to us that needs attention? The large scale sign features a two-sided neon light installation. Gates inserts white neon lights spelling out MAMA’S MILK. The integration of MAMA’S MILK speaks to the socio-political issue of underserved communities in Chicago and the relationship between alcohol and breastfeeding, an issue that was large-scaled. The epidemic of alcoholism in poorer communities and breastfeeding becomes very apparent here. He creates a space for production rather than contemplation, and in turn challenges our perceptions of the space around us, and how we function in it.

His practice is uncomparable in regards to the integration of his fine art practice, urban planning concerns, and the economic prosperity of his neighborhood. Gates relays his background in urban planning in this exhibition through “Every Square”, 2019 that mirrors Mies van der Rohe Federal Center. The Federal Center has been home to not only the courthouses, but also drug enforcement, and department of labor. Each of these sectors has a long history in Chicago of struggle. He echoes the Federal Center even further through the centralized metal stage featuring large beams that relay the architecture behind the building. Two staircases allow spectators to walk onto the platform. Within the gridded platform include a ceramic vase, and a carved mask adorned with horns. The placement of this stage emphasizes the purpose of this building and the issues associated with law, drugs, and labor within the City. Gates uses this performance of space as a way to create a more open practice and creating an experimental atmosphere with different mediums and thus the metal platform in the center of the gallery reactives our own values of work methodology and historical reference. While performance is usually a direct outward motion Gates uses performance in this show playing with the contrasts of rigidity and fluidity. Clay and iron are soft before they harden to a solid and neon gases flow freely inside the rigid shell of glass that is contained within the luminous signage.

The integration of materials found in urban neighborhoods speaks to Gates urban planning background and cultural awareness. On one wall of the gallery three painting hanging in a row, Highway with Mountain, Black Rainbow, and Arc (2019). These paintings are constructed from roofing material and tar. These black-on-black, minimalist paintings expose the various possibilities for industrial materials to become art mediums. In addition, this use of tar can redefine how manual labor in regards to building can be seen as a performance art. Gates use of tar speaks to a family history of his father using tar while roofing, a discarded everyday material that has roots in the history of Chicago. The overlooked foundational materials of cities come to surface as Gates brings light to these, specifically in regards to concrete, tar, and steel, which are overtly displayed to the viewer. Tar is a highly resistant substance, but during the application and curing process tar often emits toxic fumes. By repurposing the tar Gates reveals the strength and vitality in items that are looked upon as devalued.

A very small amount of artists who have an interest in social issues has successfully found a way to be directly effective in their artistic practices. Every Square needs a circle actively addresses class struggle, urban growth, and community activism. He transforms the gallery without displacing or changing its essential characteristics, similar to his continued work in the South Side of Chicago. Gates exhibition is an urban mastery integrating three neon signs adding to the grandeur of this installation. Through the repurposing of materials Gates manifests a representation of black communities and the Chicago landscape.  Gates’ reconstructive architecture isn’t about gentrification, instead, it is about creating solidarity for residents to feel that their cultural and survive and flourish in their communities. The landscape created by Gates in this exhibition is systematic and manufactured, while raw and vulnerable at the same time, taking a closer look at the relationship of racial and socioeconomic status in Chicago. Gates’ immersive exhibition highlights how active environments can positively influence perception. Every Square needs a circle allows you to imagine more can happen. 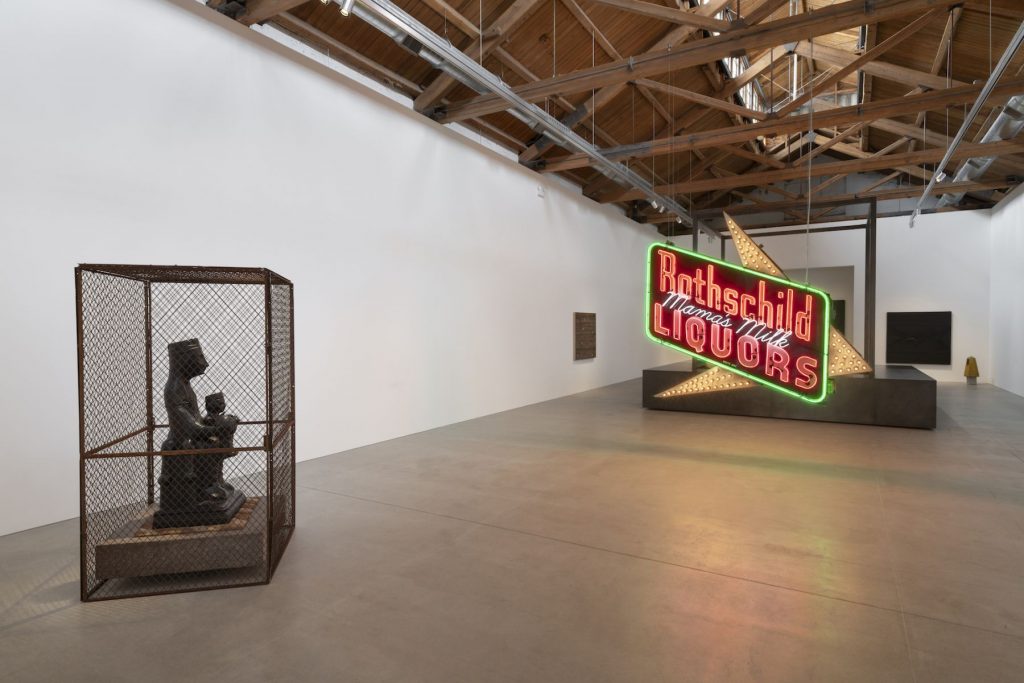 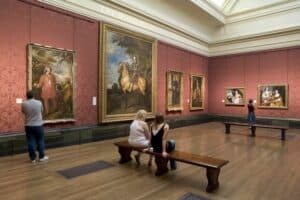