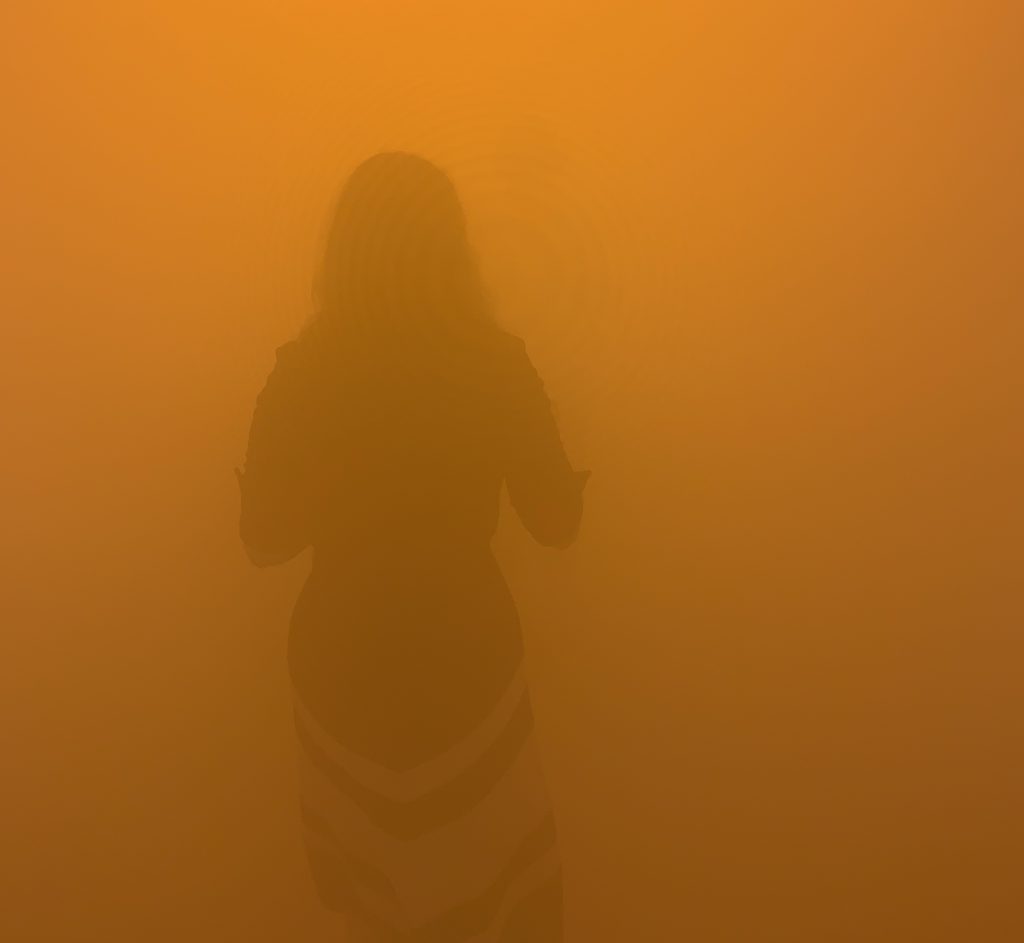 Olafur Eliasson (b. 1967) returns to Tate Modern with a major survey exhibition of his career to date, following his world-renowned installation The weather project in 2003. That moment marked a turning point for contemporary art, transforming the iconic Turbine Hall into a social space where sculpture was bound up with the experience of being together with other visitors. In the 16 years since, Eliasson has been celebrated internationally as one of the most exciting artists working today. Now for the first time, UK audiences can discover the full range of his practice spanning three decades. Bringing together around 40 works – almost all of which have never been seen in this country, including some created especially for the exhibition – Olafur Eliasson: In real life offers unmissable experiences and shows how Eliasson brings to our attention some of today’s most urgent issues.

Eliasson spent considerable time in Iceland as a child, and natural phenomena such as water, light and mist have been key areas of investigation throughout his career. On the terrace outside Tate Modern, visitors first encounter Waterfall 2019 – a dramatic new installation measuring over 11 metres in height. Inside the exhibition viewers will find Moss wall 1994, a vast plane 20 metres wide entirely covered with Scandinavian reindeer moss; Beauty 1993, which unexpectedly conjures the natural phenomenon of a rainbow inside the exhibition; and Din blinde passager (Your blind passenger) 2010, which offers a visceral journey through a 39-metre-long corridor full of dense fog. Further works in the show address the impact humans have on the environment, including a series of photographs of Iceland’s glaciers taken by the artist in 1999. This will be replaced in the autumn by a new artwork that incorporates the old series alongside photos taken 20 years on, illustrating the changes in this landscape that are happening now.

Eliasson creates works that continually prompt viewers to think about the nature of perception. Many of his installations play with reflections, inversions, after-images and shifting colours, to challenge the way we navigate and perceive our environments. As visitors pass in front of the bright lights of Your uncertain shadow (colour) 2010, they cast unexpected colourful shadows on the wall before them, while the yellow mono-frequency lights used within Room for one colour 1997 reduce viewers’ perception to shades of yellow and black. A selection of the artist’s kaleidoscopic sculptures including Your spiral view 2002 and the newly created Your planetary window 2019, play with light and space to create optical illusions that encourage visitors to see their environment in new ways.

The exhibition explores geometry as a major theme that continues to characterise Eliasson’s practice today, with many works, such as Stardust particle 2014, created using complex interlocking shapes and crystalline structures. A focal point is the extensive Model room 2003, bringing together around 450 models, prototypes, and geometrical studies of various sizes that record Eliasson’s collaboration with his studio team and, notably, Icelandic artist, mathematician and architect Einar Thorsteinn (1942–2015).

The show culminates with a space called The Expanded Studio, which explores Eliasson’s deep engagement with social and environmental issues. This includes projects such as Little Sun, first launched at Tate Modern in 2012, which provides solar-powered lamps and chargers to communities without access to electricity; Green light – An artistic workshop, in which asylum seekers and refugees, together with members of the public, constructed Green light lamps and took part in accompanying educational programmes; and Ice Watch, an installation of glacial ice from Greenland, most recently staged outside Tate Modern and Bloomberg’s European headquarters, which aims to increase awareness of the climate emergency. Eliasson’s wide-ranging architectural projects are also explored here, including Fjordenhus in Denmark, completed last year. Viewers are offered behind-the-scenes insight into how Studio Olafur Eliasson works day to day and are invited to participate in collaborative making activities.

For the duration of the show Studio Olafur Eliasson’s kitchen team, SOE Kitchen, has collaborated with Tate Eats on a special menu for Tate Modern’s Terrace Bar. This is based on organic, vegetarian and locally sourced produce that is central to the Studio’s own kitchen in Berlin. Surrounded by artworks and lights designed by Eliasson, visitors can eat family-style at tables similar to those at the studio.

Olafur Eliasson: In real life is at Tate Modern from 11 July 2019 until 5 January 2020. It is curated by Mark Godfrey, Senior Curator, International Art, and Emma Lewis, Assistant Curator, in close collaboration with Studio Olafur Eliasson. The exhibition is accompanied by a series of public events throughout the gallery and in the Terrace Bar, as well as a new catalogue from Tate Publishing which gives insight into Eliasson’s thinking through conversations between the artist and a wide range of collaborators including architects, musicians, chronobiologists and neuroscientists. Following the presentation at Tate Modern the exhibition will tour to the Guggenheim Museum Bilbao from 14 February to 21 June 2020.

About The Artist
Olafur Eliasson (b. 1967) grew up in Iceland and Denmark. In 1995 he founded Studio Olafur Eliasson in Berlin, which today includes craftsmen, architects, archivists, researchers, administrators, cooks, programmers, art historians and specialized technicians. Since the mid-1990s Eliasson has realised numerous major exhibitions and projects around the world. In 2003 The weather project, installed in the Turbine Hall of Tate Modern, was seen by more than two million people. Eliasson’s projects in public space include Serpentine Gallery Pavilion 2007, designed with Kjetil Thorsen for London’s Kensington Gardens; The New York City Waterfalls, 2008; and Ice Watch, for which Eliasson and geologist Minik Rosing transported massive blocks of glacial ice from Greenland to Copenhagen (2014), Paris (2015) and London (2018) to raise awareness of climate change. In 2012 Eliasson founded the social business Little Sun, and in 2014 he and architect Sebastian Behmann founded Studio Other Spaces, an office for art and architecture.
olafureliasson.net studiootherspaces.net or littlesun.com

Throughout the exhibition period, visitors are invited to send questions to the studio via Twitter by using the hashtag #askSOE. Questions will be presented alongside the studio’s responses at olafureliasson.net/asksoe and screened in The Expanded Studio space in the exhibition.