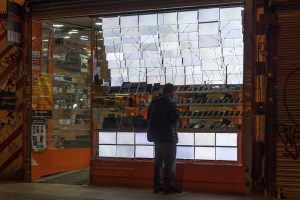 On March 22ndHanusch opened her most recent show “The Romance” in All About Laptops on Rye Lane, Peckham. It is the third in a series of alchemical works with disused laptop screens.

In this era, the ubiquitous screen is a material we spend half our lives looking at. However, how much are we really looking at the screen itself? Through the assemblage and dissection of the laptop screens, Hanusch has brought attention to the very materiality of the object. Cleverly placed in the window, the screens are no longer windows which to look through but to look at. 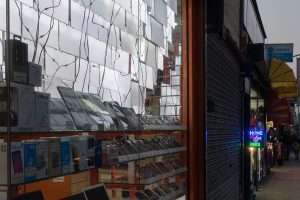 The display into this electronic store has been interrupted by the solidarity of the screen, yet, still lures you in like a moth to a screen. The screen’s presence has been announced through their dissection and their rejection. A rejection that Hanusch has turned into a romance. Similar to their neighbouring shop advertisements and street lights, the screens radiate a synthetic light onto the chaotic and noisy street. Drawn in, you look in to see iPhones, iPads, cameras, and other gadgets on sales – all highlighted by their broken and repurposed companions. 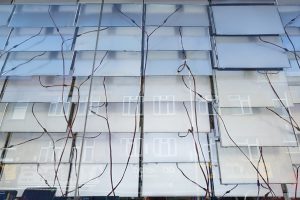 Hanusch has admirably transformed the everyday store – bringing art into an unexpected and ordinary space. Hanusch’s next show in July, “The Slippery Scenario”, will be at the APT Gallery in Deptford. After that, “Existing in an un-real world” at Artlicks Weekend 2019. 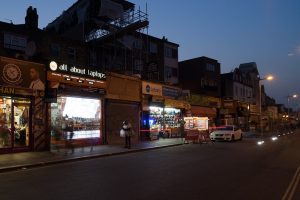 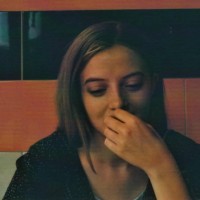 Kate Mcilwee interviews and writes for up-and-coming and established artists. Her experience lies in working as a freelance editorial assistant as well as project managing the youth-led creative group REcreative at the South London Gallery. She is also an artist in her own right, producing poetry, photography and re-working clothing.