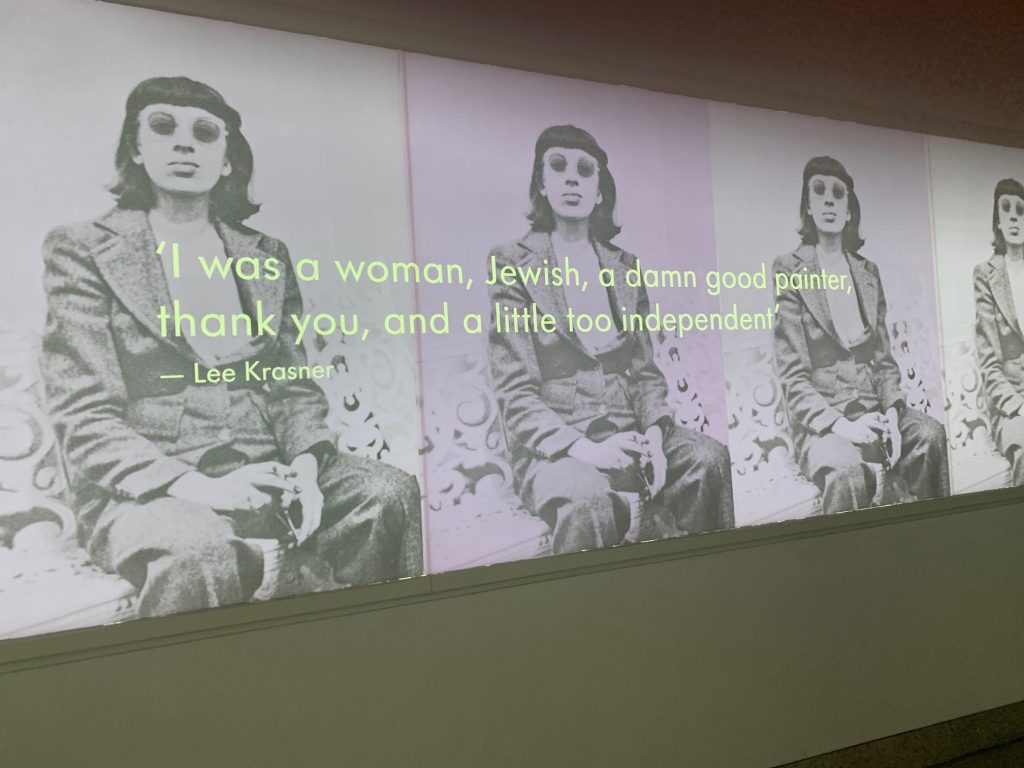 This is the first retrospective in Europe for over 50 years of American artist Lee Krasner (1908 – 1984). One of the pioneers of Abstract Expressionism, Krasner made work reflecting the feeling of possibility and experiment in New York in the post-war period. 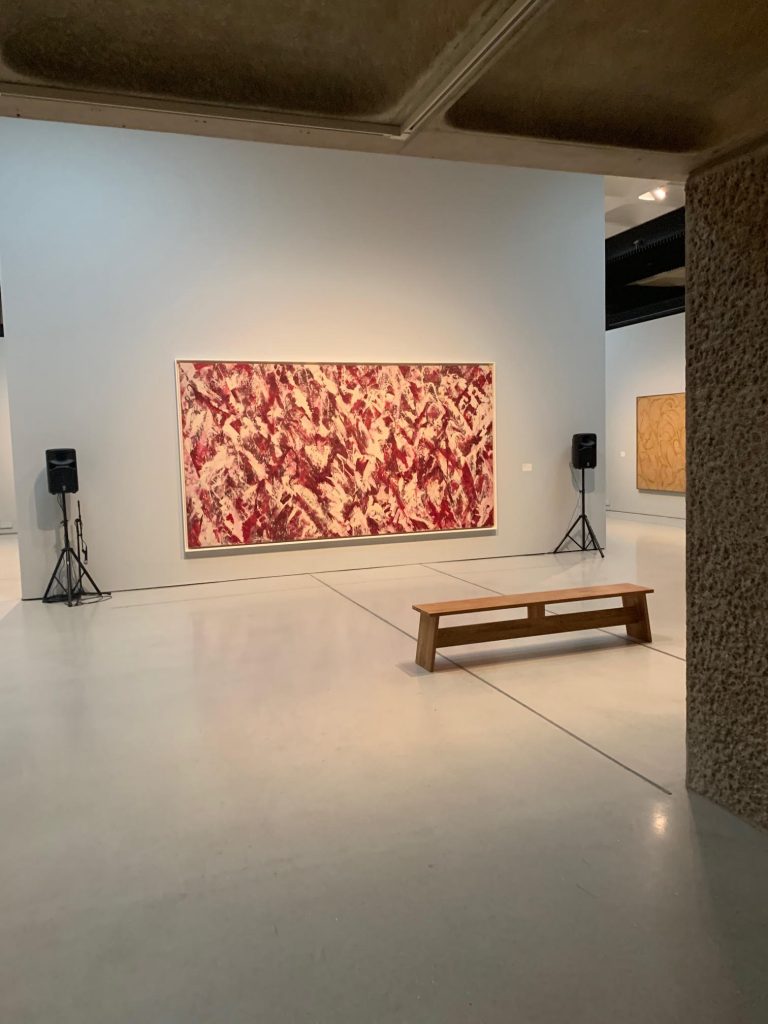 The exhibition celebrates Krasner’s spirit for invention – including striking early self-portraits; a body of energetic charcoal life drawings; original photographs of her proposed department store window displays, designed during the war effort; and her acclaimed ‘Little Image’ paintings from the 1940s with their tightly controlled geometries. It also features collages comprised of torn-up earlier work and a selection of her most impressive large-scale abstract paintings. This work is accompanied by rare photography and film from the period, in an elegant exhibition design by David Chipperfield Architects.
Jane Alison, Head of Visual Arts, Barbican, said: ‘We are thrilled to be staging Lee Krasner: Living Colour. Despite featuring in museum collections around the world and being one of the few women to have had a solo show at New York’s Museum of Modern Art, in1984, Krasner has not received the recognition that she deserves in Europe, making this an exciting opportunity for visitors here to experience the sheer impact of her work’.

‘Lee Krasner would have been delighted to see her career being reconsidered in such a dynamic way at the Barbican. Her life and work are an inspiring example of what can be achieved with both vision and tenacity’

Krasner was determined to find new ways to capture inner experience. As the playwright Edward Albee commented at her memorial at the Metropolitan Museum of Art, in both her life and her work, ‘…she looked you straight in the eye, and you dared not flinch’. Born in Brooklyn in 1908 in a family recently emigrated from Russia, she chose to attend Washington Irving High School (which at the time was the only school in New York to offer an art course for girls) before going on to study at the National Academy of Design. She was inspired by the opening of MoMA in 1929; joined the Hans Hofmann School of Fine Arts, where she made lifelong friends including renowned designer Ray Eames; was a member of the American Abstract Artists; and became a friend to many leading artists of the day including Willem de Kooning and Franz Kline. 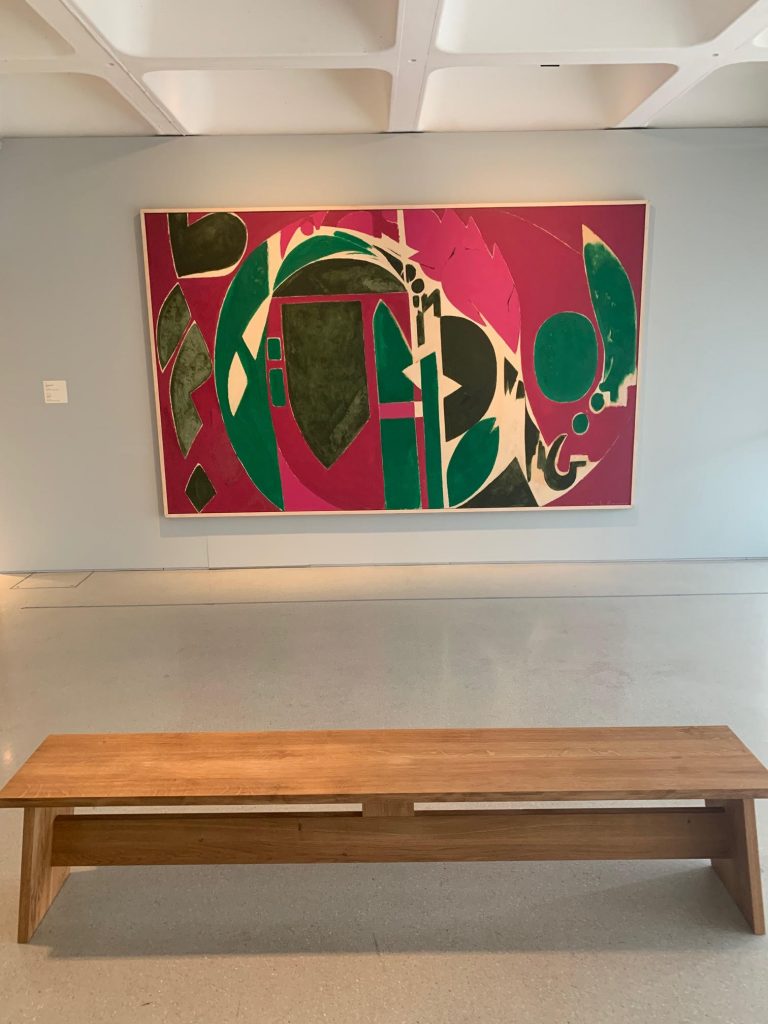 In 1945, Krasner married Jackson Pollock and they moved to Springs, Long Island, borrowing $2000 from collector and dealer Peggy Guggenheim to buy a run-down clapboard farmhouse. Krasner worked in the living room and then an upstairs bedroom – intimate make-shift studio spaces, which are mirrored in the Barbican Art Gallery’s upstairs rooms – while Pollock worked in a converted barn outside. After Pollock’s early death in a car crash in 1956, Krasner made the courageous decision to claim his studio as her own, which allowed her to work for the first time on large, un-stretched canvas tacked to the wall. The result would be the remarkable ‘Umber’ and ‘Primary’ series paintings, in which her exploration of scale, biomorphic form and colour collided into some of her most celebrated work. Examples on show include The Guardian, 1960; Happy Lady, 1963; Icarus, 1964; and Siren, 1966. 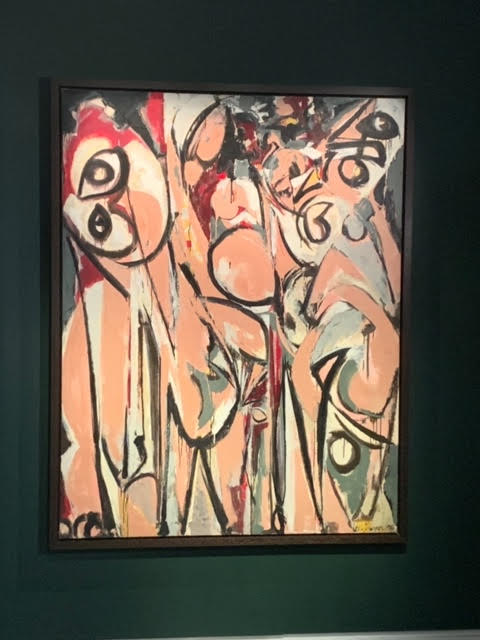 Lee Krasner: Living Colour draws from more than 50 international collections: from museums, including the Metropolitan Museum of Art, Los Angeles County Museum of Art, San Francisco Museum of Modern Art, the National Gallery of Washington, the Whitney Museum of American Art, Hirshhorn Museum and Sculpture Garden, Philadelphia Museum of Art, the Jewish Museum and the Museum of Fine Arts Houston, as well as from a large number of private collections. Many works are being exhibited in Europe for the first time, such as the monumental Combat (1965), which is over 4 metres long, and has travelled from the National Gallery of Victoria in Australia.