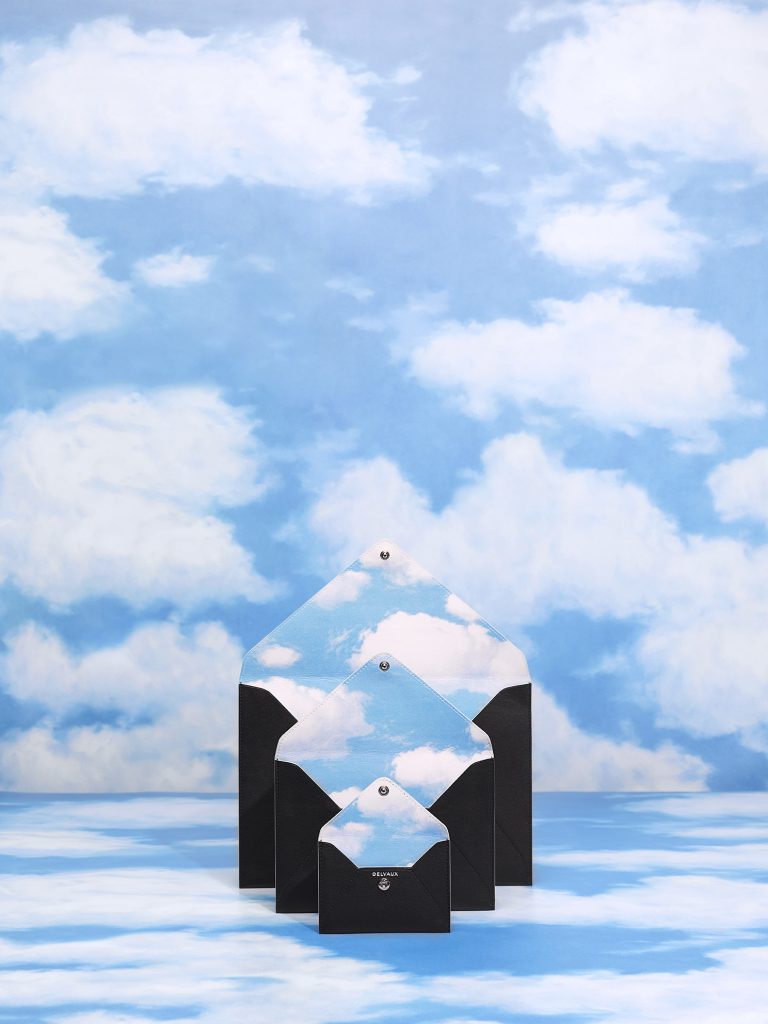 This follows on from an initial collaboration between Delvaux and the Magritte Foundation in 2015, as well as partnerships for major Magritte museum retrospectives at the Centre Pompidou in Paris, and the SFMOMA in San Francisco.
This new and unique alliance has resulted in an exceptional ‘Magritte Collection’, a whimsical project featuring the Belgian artist’s unique oeuvre transposed into Delvaux luxury leather goods designs. Infused with surrealism and unexpected playful touches, the collection pays homage to Magritte’s essence and his many emblematic paintings such as Man in a Bowler Hat, The Promise, The Kiss and Golconda. Celebrating Belgitude and reaffirming their authentic commitment to arts and culture, Delvaux and Fondation Magritte will jointly present a first-of-its-kind exhibition of rare and inedited artworks by Rene? Magritte. The exhibition runs until 24th May, in Delvaux’s newly inaugurated American flagship on Fifth Avenue, during the Modern and Contemporary art auctions week in Manhattan.

ABOUT DELVAUX
Founded in Brussels in 1829, Delvaux is the oldest fine leather luxury goods house in the world and has been active without interruption since its beginnings. Creator of more than 3000 designs, Delvaux led the first ever handbag patent in 1908, thus becoming inventor of the modern handbag. Since its creation, la Maison has been both avant-garde and true to the finest traditions of craftsmanship while conveying the grandeur, heritage and symbols of Belgian culture.
Official purveyor to the Royal Court of Belgium since 1883, Delvaux has remained steadfast in its devotion to sharing and celebrating Belgian cultural references and values. delvaux.com