Following an exhibition of Stan Squirewell’s work at FACTION’s Harlem space, the FACTION team bring him to London for a display of multilayered collages which through elements of mythology, sacred geometry and science tackle themes of race and memory. This exhibition will mark Stan Squirewell’s first solo show outside the US. 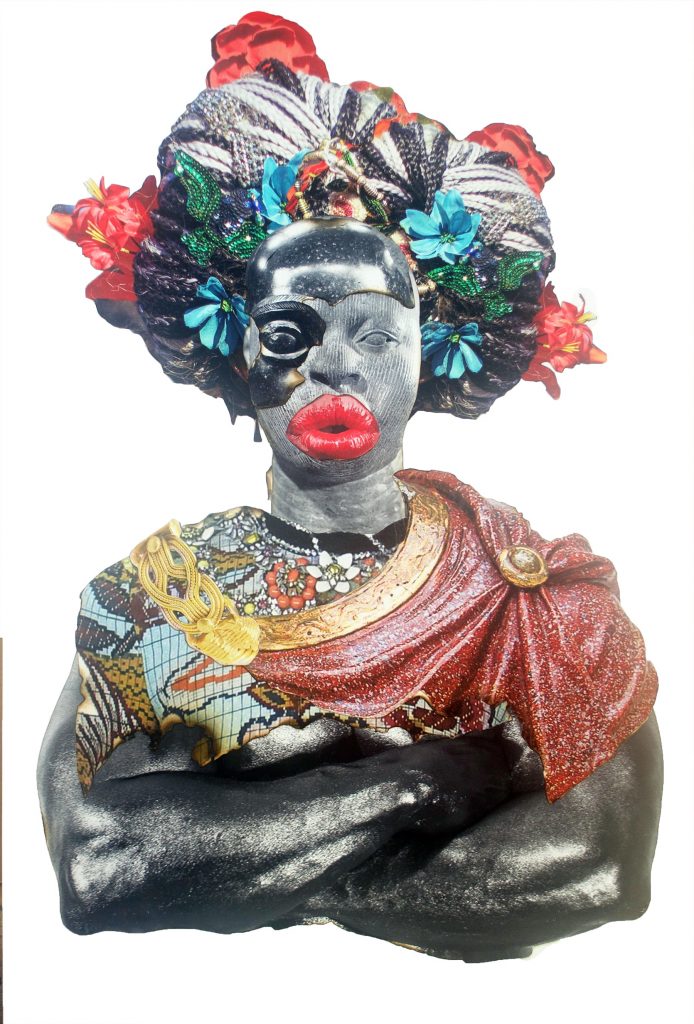 Squirewell’s newest works which have evolved over two or three years of archival study and exploration are heavily influenced by a recent revelation of his paternal ancestry.

‘For most of my life I believed my family were African Americans who had arrived in the US on slave ships, and it wasn’t until my twenties that I discovered my true heritage, that they were indigenous Americans. As a teacher working closely with the national curriculum I constantly see how history, even now, is curated. My art attempts to rewrite these assumed histories.
The beauty of the works capture the viewer, but it’s the ugly that intrigues and leads them to look deeper.’ 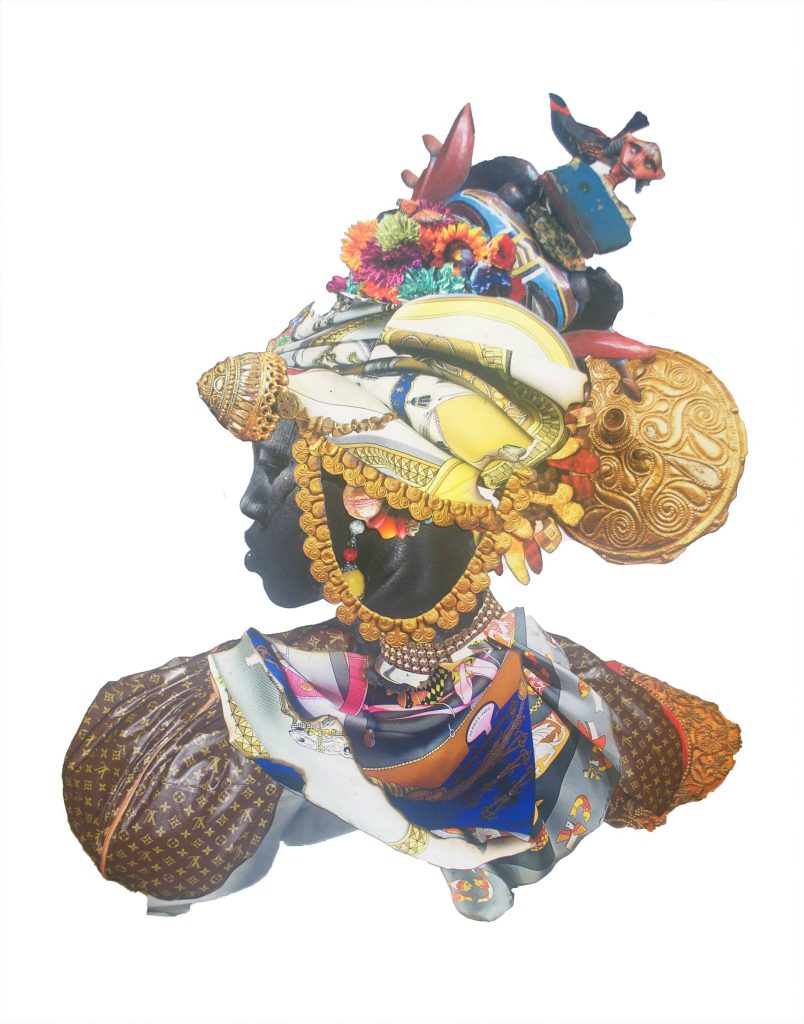 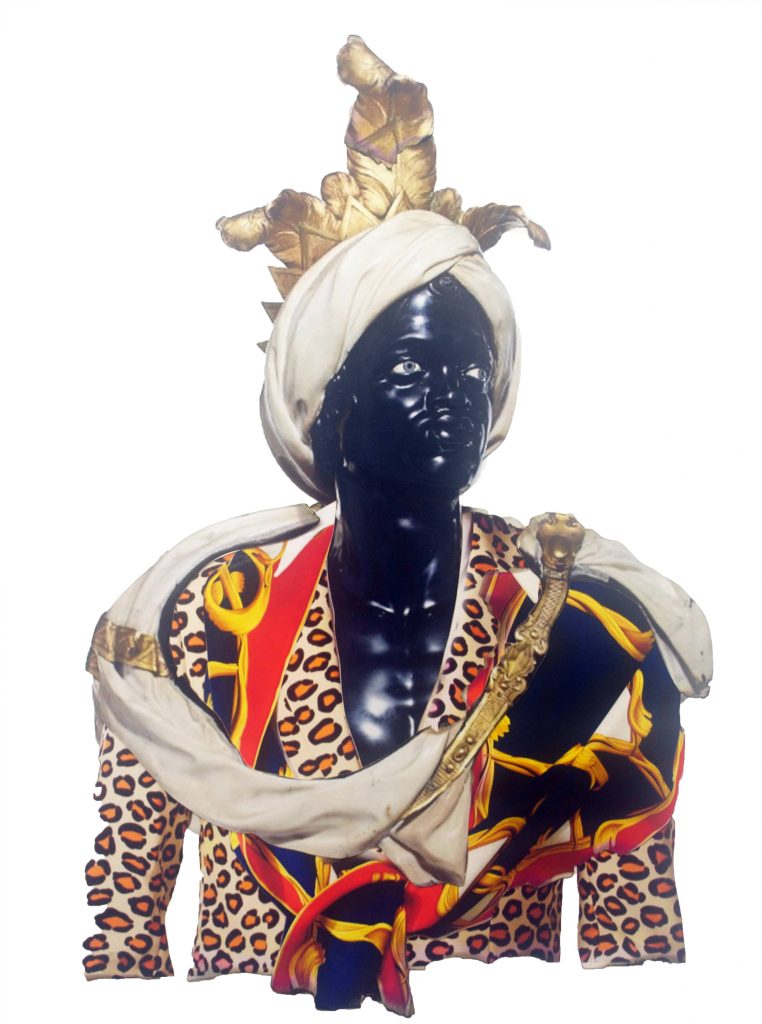 Discovering his ancestry has prompted Squirewell to question his identity, particularly in the western hemisphere. It also speaks to his battle with the omnipresent slavery narrative, when he himself comes from a black family that is not believed to have a history of slavery. Through portraiture he challenges histories and presents a more empowering narrative for black identity, seeking to change the terminology around the very word ‘black’. The portraits have a 16-18th century aesthetic with a contemporary awareness. The depicted figures are both real historical figures and fictitious characters that are in some way related to the artist. Through demonstrating the misrepresentations of history, they critique what we colloquially describe as fact. Each artwork is complete only after he ceremoniously burns both the collage and its hand-carved frames which include motifs and markings from ancient indigenous American and African cultures. The titles of Stan Squirewell’s works reference particular moments in our shared history. One work entitled ‘Willendorf ’, is inspired by the prehistoric female figure of ‘Venus of Willendorf ’, while another, ‘Amerindian’ refers to the ‘$5 Indians’ – those who, 125 years ago, paid for falsified documents that proved them to be Native American. 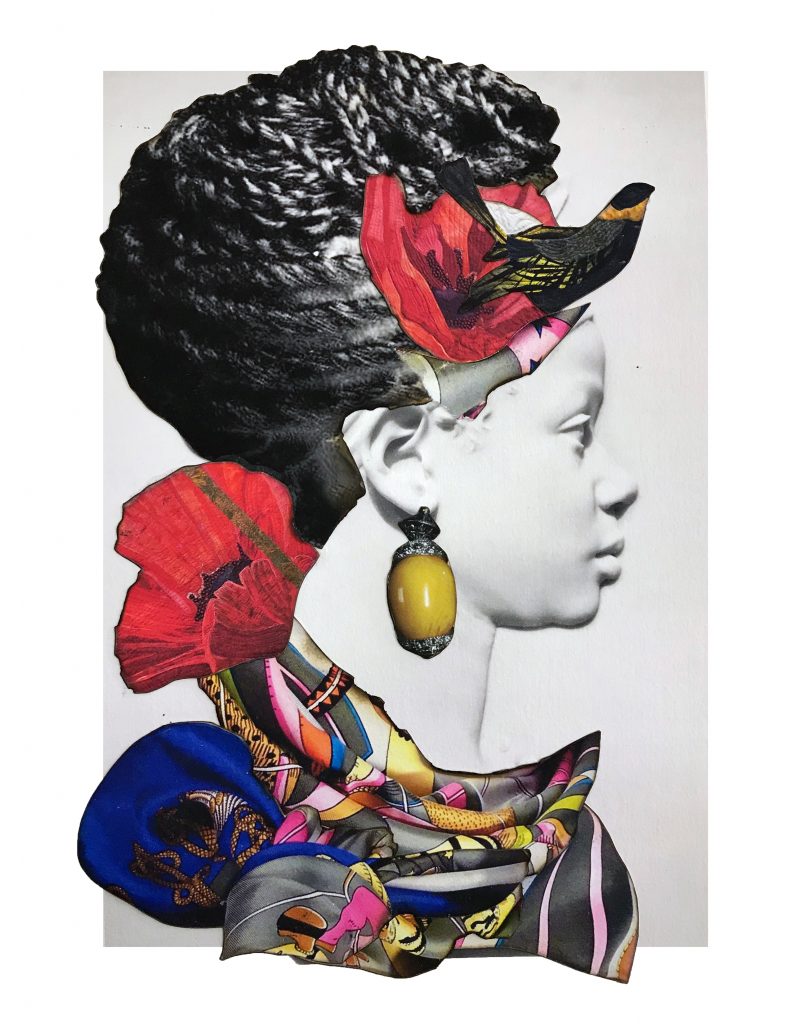 About The Artist
Stan Squirewell was born and raised in Washington, DC and currently lives and works in Harlem, New York. His artistic training began at the Duke Ellington School of the Arts. Since graduating he has continued his tutelage under many of DC’s legends including artists Michael Platt and Lou Stovall.
Squirewell, is a painter, photographer, installation and performance artist. His work is multilayered and his subject matter tackles themes such as: race and memory through mythology, sacred geometry and science. He draws his inspiration from theory books, science fiction movies and novels, avant-garde jazz and indigenous storytelling. He is a (2007 MFA) graduate of the Hoffberger School of Painting where he studied with the late, Grace Hartigan. Squirewell is the first winner of the Rush Philanthropic and Bombay Sapphire Artisan series. He has performed with Nick Cave (SoundSuits) at the National Portrait Gallery and Jefferson Pinder with G-Fine Arts. He is privately and publicly collected, his works are in the Reginald Lewis Museum, the Robert Steele Collection and recently acquired by the Smithsonian for the African American Museum (2015.) Squirewell is currently exhibited as part of ‘Fashioning the body’ at projects+gallery in St. Louis alongside Bisa Butler, Soly Cisse?, Renee Cox, David Antonio Cruz, Kenturah Davis, Hassan Hajjaj, Basil Kincaid, Mario Moore, Chris Ofili, Fahamu Pecou, Katherine Simo?ne Reynolds, Jacolby Satterwhite, Mickalene Thomas, and Kehinde Wiley.