Imago Dei, translated from Latin means; ‘God Image’ While not related to a specific religion, alludes to the transcendent nature of man.

Manifested as a wall constructed out of rusty corrugated iron, symbolic of degradation, (post) industrialization and a redundant worldview. The use of found/real-world objects relates to ideas of the material, the known, the physical, materialism, capitalism and consumerism. In it a hole is cut out of the top section, where the focal point of the piece, the projected wave pulse becomes a glowing light source representing perhaps a conscious being or a portal to another dimension, behind it is a big subwoofer, playing a sub-bass sound every time the warp wave comes into the projection. Sound, of course, has the ability to transcend the physical and merely visual, as the bass sound is felt vibration to permeate through the exhibition. Coupled with a soundscape of isochronic tones, which are known as brainwave entrainment. Entrainment occurs when the brainwave frequency starts to replicate that of the stimulus. Depending on the frequency, they are used for stress reduction, relaxation, deeper meditation, increased memory, better concentration and more creativity and to gain altered states of consciousness. 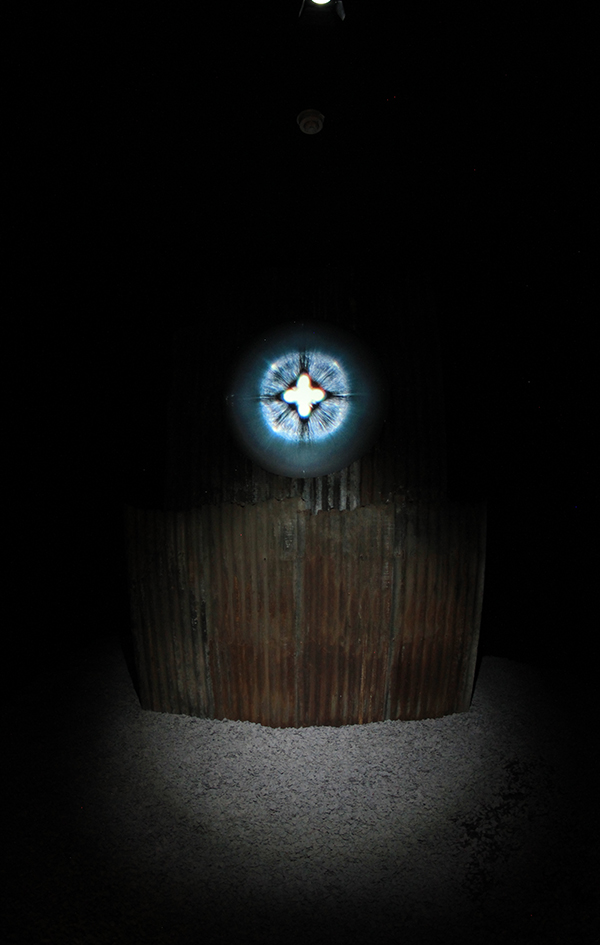 The iron is mounted on stage flats and held up with supports and sandbags combined with dynamic spot lighting, allude to the illusion of theatre and play between reality and fiction. The structure is surrounded by slate gravel, which is tactile underfoot, creating a crunching sound when walked on, enacts a wasteland and becomes a subtle and subconscious interaction with the audience.

These elements create a liminal space for the viewer to walk into, get lost in and transcend. Stirring up feelings of the ominous and of awe, of the ephemeral, the metaphysical and the immaterial, the unknown and unnerving imminence, the omnipresent, the omnipotent. Suggesting the possibility of a new paradigm shift and ascension to higher consciousness. Once the audience leave, they walk away in contemplation of the world they’ve stepped back into and begin to question their own reality.

About The Artist
Blair Zaye is an artist/curator originally from New Zealand with a Bachelor of Visual Arts from Auckland University, New Zealand and a Masters in Fine Art at Chelsea, based in London since 2008.

A multidisciplinary artist working in paintings, drawings, video, performance and installation his work researches the changes that have and are occurring in society. Observing where artists have placed themselves within these conversations historically, presently and could do in the future. In particular, he attempts to investigate the boundaries and similarities between; technology, neo-futurism, quantum physics, consciousness, the esoteric, spirituality, populism, human potentialism, the transcendental and the nature of realities.

Initially posing the following questions pertaining to the contextual melee above; What happened? What’s happening? What’s next, and how can this be expressed, relayed and understood? Moreover; Where does the spiritual fit into contemporary art these days and how can it be communicated and what part does it play in cultural (r)evolution in the modern world?

Exploring the differences and also the links between the tangible vs. the intangible, the duality or perhaps the dichotomy between the taught concepts of the transcendental versus the genuine experience of it. Previous attempts to relay the transcendental created a barrier between the experience and the viewer, as such he is now in the process of moving from the (re)presentation of knowledge/thought, to the attempt of making a more immersive transcendental experience, with the hope that people can later reflect and seek themselves. Zaye has continued exploring how reality can be conveyed and fictionalize via film and theatre, using found objects to represent the old materialistic worldview. Looking at what mechanisms can be utilized and/or if it is possible to signpost a path to an awakening and cultivate a new holistic worldview, presenting the result of this awakening through immersion and emotive experience. 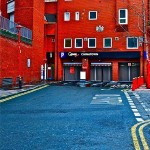 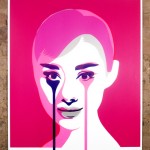 TEN artists, intensity, everything up to TEN…..