I think he has access to a state that far exceeds ours. That doesn’t make it a categorically different state that he’s achieving. It just means that he is able to touch something and to see a vast landscape where we only get a sliver of that experience. 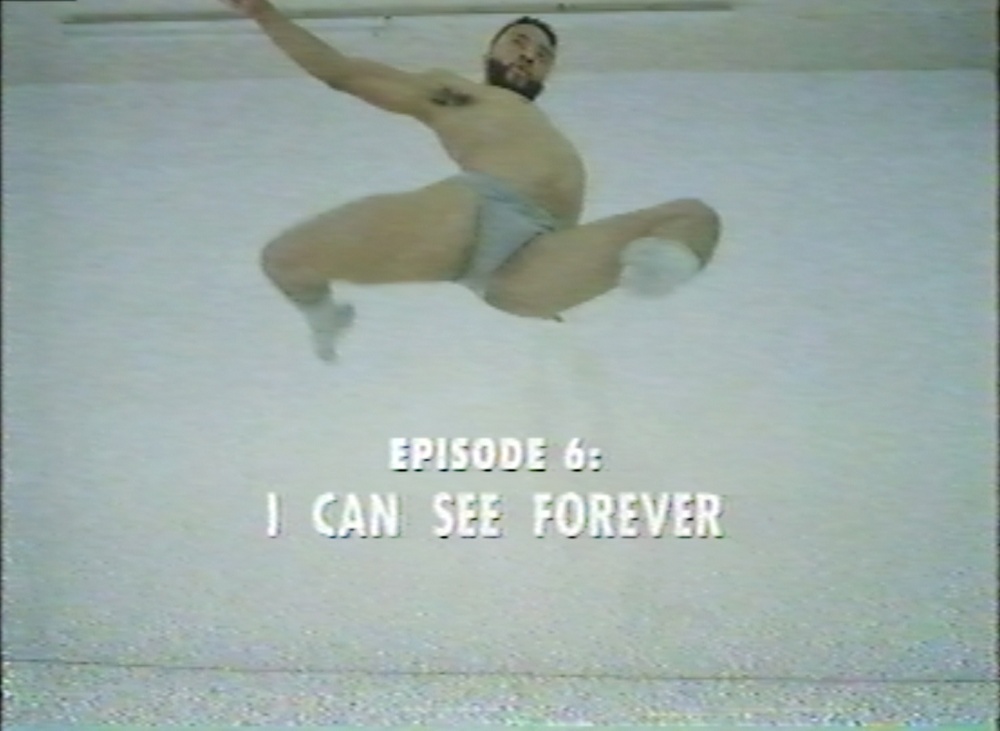 Jeremy Shaw’s artistic practice is characterized by a complex use of effects and narrative devices in relation to perceptions of reality and expressions of ideology in contemporary art, film and popular media. His most recent film, I Can See Forever (2018), is the final chapter of the critically-acclaimed and widely
exhibited Quantification Trilogy, preceded by Quickeners (2014), and Liminals (2017). All three films explore the potential of catharsis to simultaneously represent and effect states of mind, perception, ecstasy, belief, religious fervour, escapist fantasies, and extremes of subjective experience as formu-lated in sub- and counter-cultures that have changed the Western political landscape since the 1960’s. Through a precise management of the expectations of film, Shaw’s works directly challenge normative forms of subjectivity in cultural production.

I Can See Forever is a pseudo-documentary set approximately 40 years in the future. It is presented as an episode of a documentary television series about “The Singularity Project”– a failed government experiment that aimed to create a harmonious synthesis of human and machine. The film exposes the story of the
only known survivor, 27 year-old Roderick Dale. Born with an 8.7% Machine DNA biology and uninterested in the virtual reality-trappings of his time, Dale has committed himself to a life immersed in dance. During his unique, virtuosic activities, he claims to be able to “See Forever” – a multi-layered and contentious term that he defines as the ability to transcend to a digital plane of total unity while maintaining a corporeal physical presence. His rather hermetic life is devoted to studying ballet, modern, and various subcultural styles of dance on television. Candid scenes of a solitary Dale traversing empty civic spaces confirm the fact that ordinary denizens prefer to privately absorb themselves in The Unit – an advanced virtual reality device that has replaced spiritual experience in humans.

Dale’s story unfolds in the style of cinéma vérité through interviews, archival materials and testimonies of characters that are the subjects of an exposé, while voice-over narration outlines a troubling future world that is an exaggeration of competing myths and promises surrounding technology today.

Shaw manipulates narrative and visual expectations to such a degree that one faces a suspension of belief and disbelief. The futuristic biotechnologies and spiritual transcendence-replicating virtual reality machines described in the story stand in contrast to jigsaw puzzles and dance programs viewed on a
cathode-ray television set, unless, of course, one accepts that the problem of class is not solved by technological progress. The film’s overall period-piece styling and aesthetic – coupled with the familiar quality of grainy videotape interrupted by tracking – could, for some viewers, provoke a nostalgia for the
90s, the decade globalization secretly and radically transforms private and public sectors worldwide. Futurity casts shadows on the recent past. The use of outmoded media to trigger nostalgia underscores the fact that belief itself has a temporality.

Is it by an ongoing, historical conceit that the facticity of historical documents seem naïve compared to those produced by contemporary means? While a viewer is making sense of the material, the film presents us with a threatening situation: what if we, as citizens of the 21st Century, have lost spirituality?
How would we know – would it be gone forever? What good are facts if the plot is lost on an overall sense of purpose? Dr. Daniel Moore’s testimony, cited above, reveals how the Kantian sublime functions today: it is not enough to understand the secrets of nature with human eyes. Human knowledge depends on machines to experience the world and produce signs that are interpreted by scientists. But what if everyday experience extended the human senses into the effects of the universe around us? What if we didn’t have to turn back at the limits of our understanding? Would we lose the intimacy that engulfs us in the absence of a concept to explain what we are touching? Would we lose our humility? Or empathy? Our sense of an outside and of belonging? If history is told in the present, the present of Shaw’s films extend on either side of the
contested moment we live in.

During a highly anticipated, extended dance scene of Dale in his studio, the yearning for corporeal expression becomes unbearably beautiful. The spectrum of sound slowly begins to expand from stereo through to surround and the pace of montage accelerates. The practice session becomes one of the greatest performances (as is so often the case) and feels like the climax of the film. The viewer is sonically engulfed for a spell of time, until, suddenly, images of Dale begin to dissolve into overwhelming, computer-generated effects developed by Shaw to illustrate an extreme, subjective experience. The protagonist appears to transcend dance at the very point of becoming the object of a filmic exploration. Transcendence through dance shifts in character to become a struggle against representability. This second climax of the film is destructive: the whole aesthetic, context and presentation of the story are exploded
and transformed. In the end, the artwork reframes the story of Dale’s life, devouring and incorporating his being (and why not the viewer’s as well?) into its own apparatus. This rupture and incorporation is deeply ambivalent: for some it could represent faith, pleasure and freedom, for others, delusion, suffering and tyranny. Is all this just business us usual?

Throughout his artistic practice, Shaw is a keen observer of cultural phenomena that favour an experimental use of the mind and the body to challenge the normativity of mainstream culture. His work compels a dramatic tension around claims of truth or bodily transcendence that are entangled in self-styling forms of communal life found in cults, religious groups, scientific communities, utopian drug scenes, music and dance subcultures etc. This tension – for some viewers maybe even anxiety – expands itself to expectations around the power, or effectiveness, of contemporary art itself. Reality is an entanglement of the
effects created by human ingenuity with the potential risk of losing humanity itself.

Consistent with his previous work, I Can See Forever outlines a politics of the creation and economy of effects and affects, realities and emotions that raise issues around identity, belief systems, human evolution, and altered states that coalesce around the limitations of the human form. More specifically,
the film articulates authentic experience as the point where catharsis, the sublime experience, and their representation form the site of an ethical and political battle for autonomy that one feels forcefully subjected to or offered as a promise of escape. Aesthetically and conceptually speaking, this is not the commonly tasteful politesse of Bourgeois culture promoted in contemporary art. What is at stake is a sense of belonging in the complexity of human meanings. It is significant that Dale is driven to realizing a personal sense of belonging through his enhanced biology by actively engaging processes of research and experimentation – viewers of the artwork are left to reflect on their own beliefs and methods for doing so.

In this suspension of belief and disbelief, Shaw’s work is able to reveal a struggle between the search for truth and the desire to style and exhibit one’s own form of life through self-determination and expression, in opposition to dominant forms of governance and opinion-formation. I Can See Forever raises the question: is contemporary art a suitable site to stage such a struggle, or to present such a revelation?
Text: Maxwell Stephens

About The Artist
Jeremy Shaw (b. Vancouver, 1977) works in a variety of media to explore altered states and the cultural and scientific practices that aspire to map transcendental experience. His films, sculptures and installations have been exhibited extensively around the world, including solo shows at MoMA PS1 (US), Schinkel Pavillon (DE), and MOCA (CA), and been featured in group exhibitions such as the 57th Venice Biennale (IT), Manifesta 11 (CH), Stedelijk Museum (NL), and Palais de Tokyo (FR). In 2018, he was awarded a residency at the Hammer Museum (US) and was the winner of the 2016 Sobey Art Award (CA). Works by Shaw are held in numerous public collections worldwide including the Museum of Modern Art, NY, Centre Pompidou, FR and Tate Modern, UK. In 2020, Jeremy Shaw will have a solo exhibition at the Centre Pompidou (FR).

I Can See Forever was co-produced by Medienboard Berlin Brandenburg and KÖNIG GALERIE with support from the Hammer Museum, Los Angeles, Kunstverein Hamburg, and the Esker Foundation, Calgary. 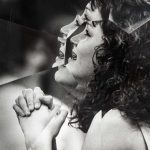 As we bridge the digital with the physical worlds, you can join König Gallery this Saturday, 4th of April at 10 am London time (GMT + 1) on @koeniggalerie for the #10amseries on Instagram, where Jeremy Shaw will discuss his practice and the works on display. 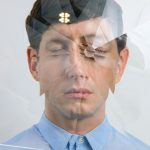 Jeremy Shaw’s 2017 work Liminals is being exhibited at The Store on The Strand in an exhibition with König Galerie in partnership with The Vinyl Factory.