John Hansard Gallery, part of the University of Southampton areto present I WAS A DARK STAR ALWAYS, a new film installation marking the centenary of the death of Wilfred Owen. 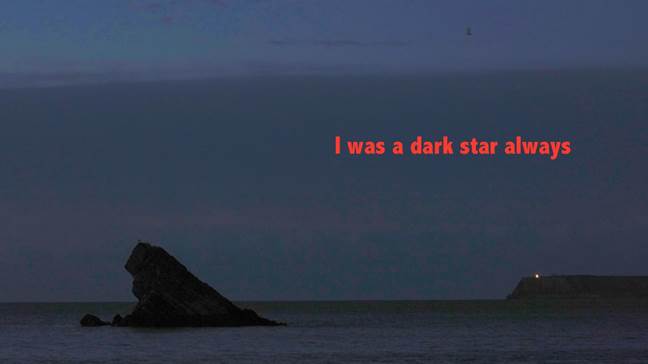 The film, written by Philip Hoare and directed by Adam Low, incorporates readings by Ben Whishaw of both letters and poems by Owen, and is filmed at key locations from his life, including the beach in Torquay where he swam as a child, and the canal in northern France where he died, on 4 November 1918, aged just 25.

Wilfred Owen only happened to be a war poet. A century on, he peers at us, over-shadowed by his death. We see a doomed poet, not an ambitious, sensual young man with a brilliant future. History and tradition has removed him from us. In life, Owen represented not the unnatural struggle of trench life or macabre themes of war, rather a young man seeking his own identity through words, a most natural and admirable pursuit. ‘I was a dark star always’, Owen told Siegfried Sassoon, a year before he died.

I WAS A DARK STAR ALWAYS lifts Owen out of the pen to which he is frequently confined, and projects him into our time. What would he have made of life after the war, had he survived? Using words from the poet himself, Hoare re-imagines him out of history’s sepia and into a bright blue sea.

I WAS A DARK STAR ALWAYS uses water as a motif and theme to explore Owen’s life and represent his fluid sexuality. He swam whenever he could, encouraged by his father, a railway clerk who’d dress up as a sailor and pretend to be a captain in Liverpool docks. Wilfred swam in rivers, pools and the sea; as a teenager in Devon, as an officer in Yorkshire, as a casualty of shellshock in Netley Hospital, near Southampton. Sent to Craiglockhart in Scotland to recuperate, he declared to Sassoon that the water ‘never fails to give me a Greek feeling of energy and elemental life.’ It was the last thing he ever did in England, bathing off Folkestone beach, watching a handsome young fellow officer wade out of the surf. He was killed in action leading his men across the Sambre-Oise canal in Ors, falling backwards into the water in a poetic and fitting final act.

Wilfred Owen was the first poet Philip Hoare loved. Growing up as a teenager in suburban Southampton in the 70s, Hoare saw him as an icon of otherness, alongside Oscar Wilde and David Bowie. 40 years on, I WAS A DARK STAR ALWAYS is an expression of this affinity and an exploration of what Owen truly represented as a modern artist dealing with themes of the natural world set against human frailty.
Philip Hoare says:

‘100 years after he was lost to us, it’s time now to see Wilfred Owen in a different way. To rescue him from the perversity of war, and restore his lust for life. I WAS A DARK ALWAYS re-imagines the vibrant, brilliant and sensuous young man that he was, and the even greater poet he would have become.’

Philip Hoare’s books include biographies of Stephen Tennant and Noël Coward, the historical studies, Wilde’s Last Stand, Spike Island, and England’s Lost Eden. His book Leviathan or, The Whale won the 2009 BBC Samuel Johnson Prize for non-fiction. The Sea Inside was published in 2013 and his most recent book RISINGTIDEFALLINGSTAR, was published in 2017. He is a Professorial Fellow in English at the University of Southampton.

I WAS A DARK STAR ALWAYS is co-produced with the John Hansard Gallery, Southampton, and will be screened at the gallery itself and other sites in Oxford, Edinburgh, Bristol and London.

John Hansard Gallery
John Hansard Gallery is an internationally recognised and locally engaged contemporary art gallery in Southampton. Being part of the University of Southampton, the Gallery aims to change the world for the better through great art. To realise this the Gallery creates innovative and critically acclaimed contemporary art exhibitions, events, engagement and research projects that excite, challenge, represent and reach the widest possible public audience. From 1979 the Gallery was located on the University’s Highfield Campus. In 2018 the Gallery relocated to the new purpose-built arts complex Studio 144 in Southampton’s city centre, significantly increasing the space available for exhibitions, events and integrated programming. Learning and engagement are at the heart of the Gallery and underpin all its activities. The innovative education and public programme is accompanied by special community-focused projects, including activities for all ages and levels of experience. John Hansard Gallery is supported using public funding as a National Portfolio Organisation by Arts Council England. www.jhg.art