Marian Goodman Gallery London is to present the monumental sculptural installation Brain/Cloud (Two Views): with Palm Tree and Seascape, 2009, by John Baldessari. This is the first time that the work has been shown since Baldessari’s major 2010 travelling retrospective Pure Beauty, which premiered at Tate Modern in 2009. 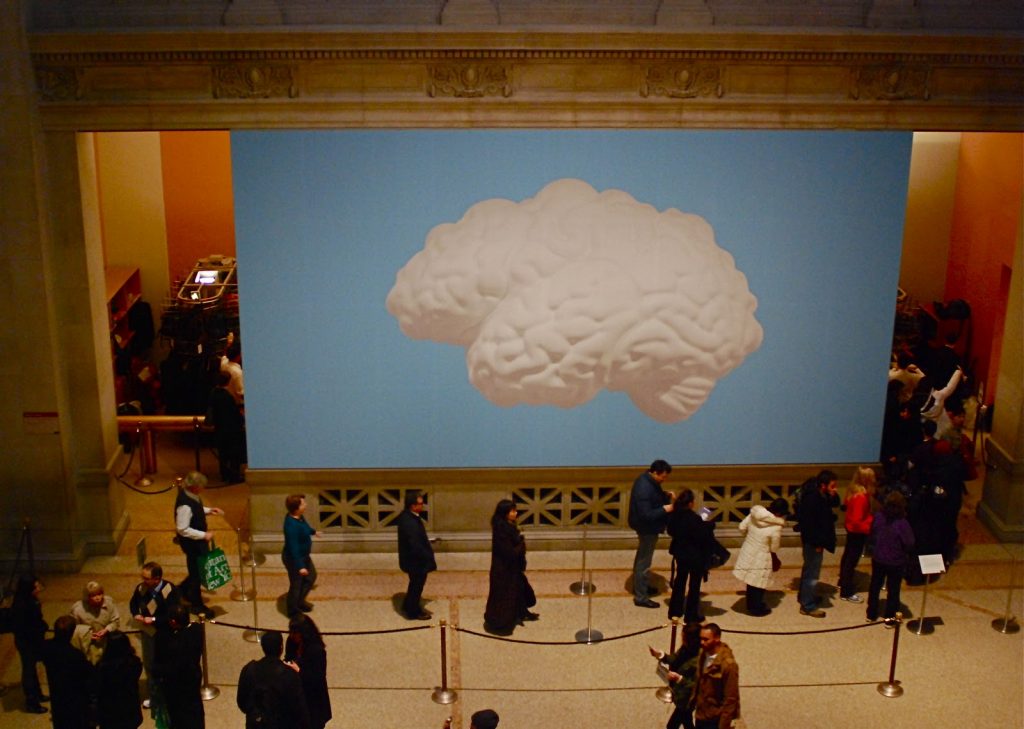 Brain/Cloud (Two Views): with Palm Tree and Seascape comprises an enormous wall-mounted cerebral cortex, made from painted polyurethane, two inkjet prints of a seascape, one with a foregrounding palm tree, and a time-delayed video which projects the viewer looking at the sculpture thirty seconds earlier. The work – a wry allusion to Rene Magritte’s Not to Be Reproduced, 1937 – presents the spectator with a Baldessari style ‘cloud’. A recurrent motif throughout his practice, a cloud was first depicted in the painting God Nose, 1965, in which the artist juxtaposed an image of the sky with an abstracted human body part, the use of isolating body parts became a continuous theme within Baldessari’s practice. Brain/Cloud takes this one step further, directly comparing the shape of the human brain to that of a cloud, exemplifying Baldessari’s proposition that unembodied physical features become newly strange, abstract, and morph into other things.

ABOUT THE ARTIST
John Baldessari was born in 1931 in National City, California. He currently lives in Santa Monica, California. Recent solo exhibitions have been held at Museo Jumex, Mexico City, Mexico (2017); the Städel Museum, Frankfurt, Germany (2015); the Garage Center for Contemporary Culture, Moscow, Russia (2013) and at the Stedelijk Van Abbemuseum, Eindhoven, Netherlands (2012).

Baldessari’s work was the subject of the major retrospective, Pure Beauty, which retraced his career from 1962 to 2010. Organised by Tate Modern, London, the exhibition travelled to MACBA, Barcelona; LACMA, Los Angeles, and the Metropolitan Museum of Art, New York from 2010 to 2011.