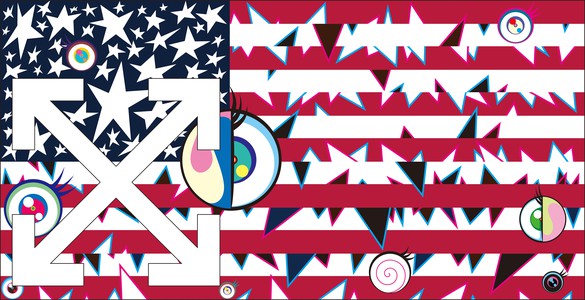 Murakami and Abloh have created an art, media, and production collaboration in layered paintings, large-scale sculptures, and the merging of their respective trademarks and brand names. Multihyphenate cult figures in their fields, they push against the parameters of fashion, art, and popular culture, provocatively blurring the lines between them.

Abloh, trained as an architect and engineer, works across fashion, architecture, performance, and consumer products, often deconstructing the creative process in public to challenge and analyze existing aesthetic systems and their distribution. His street-couture label Off-White, which he founded in 2013, combines conventional tailoring with more subversive references, while his role as the artistic director of Louis Vuitton’s menswear places his current design work in dialogue with Murakami’s celebrated collaborations with Vuitton, beginning in 2002.

For “AMERICA TOO” Murakami and Abloh have produced works in which their respective styles and trademarks intersect in a stream of freewheeling, punkish mash-ups. The two artists, kindred spirits from different sectors of a broader cultural zone, reflect incisively on the signs of the current times while working to disrupt the stratifications of cultural production.

A series of new paintings borrows motifs from both Murakami’s and Abloh’s individual work histories and combines them with art-historical imagery. The signature arrows of Abloh’s label Off-White are overlaid onto Murakami’s iconic rainbow flower, stencilled canvases in gradations of colour, and images of Mr. DOB, the whimsical character that became Murakami’s first signature creation inspired by anime and manga characters. Bernini’s Self-Portrait as a Young Man (1623) dissolves in a psychedelic swirl of colour, in which traces of Mr. DOB transform the youthful silhouette of the Baroque artist. A series of sculptures that are composites of each artist’s trademark becomes oversize, glossy, and almost threateningly sanguine. Human-scale plastic iterations of the flower and arrows repeat, this time in three-dimensional media.

Virgil Abloh was born in 1980 in Rockford, Illinois. After earning a degree in civil engineering, he completed a master’s degree in architecture. In 2013, he founded the Milan-based clothing line Off-White, for which he was awarded the British Fashion Council’s Urban Luxe award in 2017. In March, Louis Vuitton named Abloh its new artistic director of menswear. He showed his first collection for Louis Vuitton during Paris Men’s Fashion Week in June 2018. In 2019, the Museum of Contemporary Art, Chicago, will hold a retrospective of his work, curated by Michael Darling.
#MurakamiandAbloh 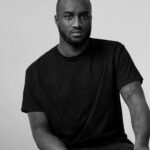 On 5th November 2021 a mid-career retrospective of the acclaimed American artist and designer, Virgil Abloh will open at the […]