kamel mennour are presenting three exhibitions by Tatiana Trouvé at its galleries in London and Paris, and at its Frieze London booth with new works specially conceived for each location. 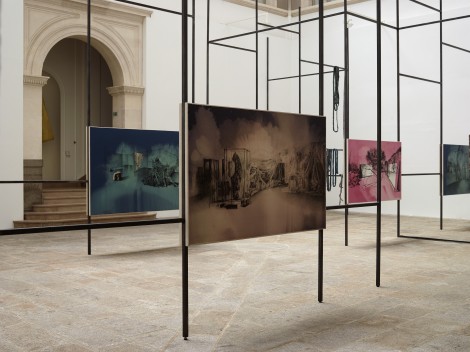 Italian-born, Paris-based Tatiana Trouvé is known for her sculptures, installations and drawings often brought together in precisely-scaled architectural installations which suggest the possibility of underlying narratives. Frequently using cast materials, such as concrete, marble, copper and bronze, she transforms everyday objects into poetic architectural sculptural forms.

On view for the first time at Frieze London, a new large-scale fountain installation features water falling from an uprooted bronze tree surrounded by a cracked concrete floor, allowing visitors to dive into an immersive experience.

At kamel mennour’s London gallery, Tatiana Trouvé re-enacts her emblematic Prepared Space installation. In this piece, the entire surface of the floor and walls is marked by long slits inserted with spacers, borrowed from the world of architecture and construction. The various trajectories intersect and join each other to form an abstract navigation map, creating a microcosm with random punctuations, a kind of geographic homage to Cage’s “prepared pianos”. This is the artist’s first major solo exhibition in London since her South London Gallery show in 2010.

In the Paris gallery, Tatiana Trouvé presents a group of sculptures inspired by visits to her studio at night. The exhibitions are accompanied by a text from philosopher Emanuele Coccia.

Solo exhibitions include Double Bind at Palais de Tokyo, Paris (2007); 4 Between 2 and 3 at Centre Pompidou, Paris (2008); A Stay Between Enclosure and Space at the Migros Museum of Zurich (2009); Tatiana Trouvé, the South London Gallery (2010); and Il grande ritratto, an extensive exhibition inspired by the title of Dino Buzzati’s science fiction novel and conceived in response to the challenging architecture of the Kunsthaus Graz (2010). The travelling exhibition I tempi doppi was presented at Kunstmuseum Bonn, Museion Bolzano-Bozen and Kunsthalle Nürnberg (2014). The Longest Echo — L’écho le plus long at Mamco, Geneva inaugurated her first retrospective exhibition (2014). The Sparkle of Absence was her first solo show in China at Red Brick Museum, Beijing (2016). Public Art Fund commissioned Desire Lines on view at Central Park in New York in 2015.

In 2018 she had solo shows at the Musée des Beaux-Arts de Rennes, at the Via Medici in Roma, and at the Petach Tikva Museum of Art, Tel-Aviv. In 2019, she will present a solo show at the Broad Art Museum in the Michigan.