Bringing Otaku into the Workplace: Why Wotakoi is still one of the most talked about anime releases of 2018 - FAD Magazine
Skip to content 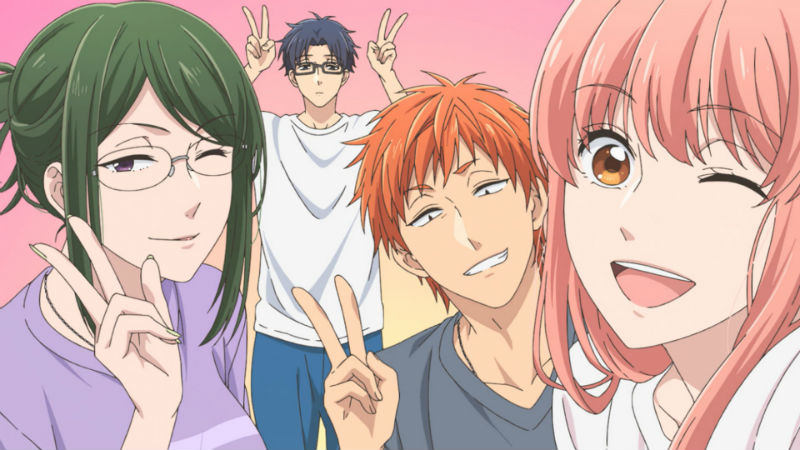 Of all the anime released so far this year, Wotaku Ni Koi Wa Muzukashii (Love is Hard for an Otaku) or Wotakoi for short, is still one of the most highly praised new series of 2018 even though its initial release dates back to early spring with first season finale having aired back in June.
Sticking out from the rest by not only taking its romcom narrative outside of the traditional anime high school setting and bringing it to the much less depicted nine to five workplace, Wotakoi also takes on the responsibility of unveiling the hidden lives of otaku, purging the theme from its lacklustre stereotypes and opening a door to a whole new world of likeable, quirky yet passionate characters.

Otaku: a Japanese term used for a person obsessively immersed in their interests, usually within the manga, anime or gaming fandom, at the detriment of their social life. Not the most endearing label to wear unless fully committed to the role and properly embracing its lifestyle, which is not the case for leading lady Narumi Momose as she first starts her new job, vowing to keep her love for yaoi (boy love) material secret from her coworkers, her fujioshi (boy love fandom) hobbies having ruined relationships in the past. Her cover is quickly blown though when she bumps into childhood friend Hirotaka Nifuji on her first day, her unveiled true form bringing her closer to like-minded colleagues who share similar passions. No longer in hiding, otaku personalities are revealed and full blown obsessions unleashed as the bonding group of friends navigate their way through office hours, unruly hobbies and new relationships.

‘How hard is it really to love an otaku?’ asks a variation of the series’ title, hinting at the anime’s office romance theme and yet, even though the raised question lingers throughout the show, the ease in which a romantic relationship blooms between main character Narumi and Hirotaka, their obvious chemistry pleasantly devoid of any of the usual drama, leaves us pondering if the question need be raised at all. With a reduced main cast of four characters, two of them already in a long term committed relationship, making for two couples within the friend group by the end of the first episode, Wotakoi leaves room for each character and couple to shine, an eager spotlight on each one of their otaku traits and lifestyle, whether that be shut in video gaming, professional cosplaying (dressing up as popular anime, manga or game characters) or collecting bishoujo (beautiful girl) figurines. As a door is opened once again to glimpse upon the otaku theme, this anime strives where others have only managed to bring in cliché storylines and stereotypical personalities by successfully creating a cast of loveable and realistic characters inside of a new yet easy to relate to setting.

Created by Fujita in 2014 as a webmanga for the Pixiv platform, Wotaku Ni Koi Wa Muzukashii puts a strongly built storyline forward from the start, introducing characters on the go in a way that flows naturally with the narration, pulling its audience in from the very first glances whether it be in its anime or manga format. With its colour coded cast (pink, blue, green and orange) emphasising on the character driven aspect of the series, it seems that Wotakoi’s clean and consistent art style willingly lets narration take the wheel as to fully immerse its viewer.

With slice of life manga and anime usually taking place in an almost closed off high school setting, the change of perspective the anime brings to the genre is refreshing, offering a brand new point of view on the adult Japanese work life with its demanding jobs and even more demanding working hours which turns out, is the perfect setting for a cast of adult otaku, their intense obsessions having survived school years while personalities matured through life experiences, making for a colourful and lively group of passionate adults within the tiresome and numbing office setting.

While otaku culture can seem overwhelming with characters spewing obscure and unfamiliar terminology every now and then, Wotakoi does its best to keep the series accessible to newcomers from all backgrounds, bringing in elements from general pop culture and subtly introducing more underground references, maintaining a steady balance between real life and fantasy. The transition into otaku day-to-day life taking place so seamlessly, subtly immersing viewers and readers while blurring lines as to make the otaku community the new norm, is what makes the series so exceptional and entertaining to watch as it calls out to the audience’s inner child from within a setting known to most regardless of its shape or form: the nine to five workplace.

Moving outside of what has worked as a constant in the past is a gamble, with slice of life romance anime almost exclusively belonging to high school formats and yet this particular move is what sets Wotaku Ni Koi Wa Muzukashii apart, as it takes a leap of faith into an unexploited setting, supporting itself with strong storylines and consistent animations, raising the bar for both the otaku theme and office setting. The good-humoured cast is what pulls it all together, their relationships with one another both comical and endearing while the bond formed around their common hobbies revealing what it takes for friendships to bloom in a desolate workplace.
Realistic day-to-day interactions turned on its head by colourful otaku lingo, the series manages to be comfortingly down-to-earth and flamboyantly eccentric at the same time which is what you get when you bring an adult otaku into the workplace.