Continuing his exploration of the relationship between comedy and tragedy within contemporary popular culture, the exhibition And You Thought I Was Bad? finds Guy Oliver stepping back into the recent past. Central to the show is a new lm that examines the perculiarities of individual and collective memory, the function of arts education, and the role of political protest within art. 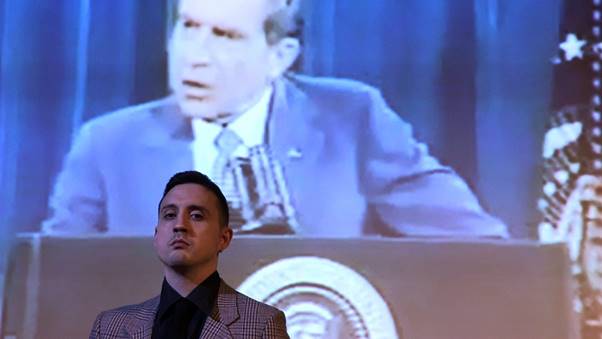 Assuming the role of a television arts presenter, Oliver returns to an unrealised work from
his time as an undergraduate student in the mid-2000s. The artist goes back to his former university to remake this long obsolete idea – a T-shirt bearing an image of Richard Nixon that aimed to satirise George W Bush and the events surrounding the Iraq war. Along the way Oliver ruminates on American Presidential gures, the cultural signi cance of Johnny Cash as both renegade radical and mainstream blue-collar hero, and how the narrative of his own life intertwines with recent socio-political global events. As Oliver’s character states in the lm, when there is something in the air, turbulent times call for ‘archival video montages with contemporaneous music’. 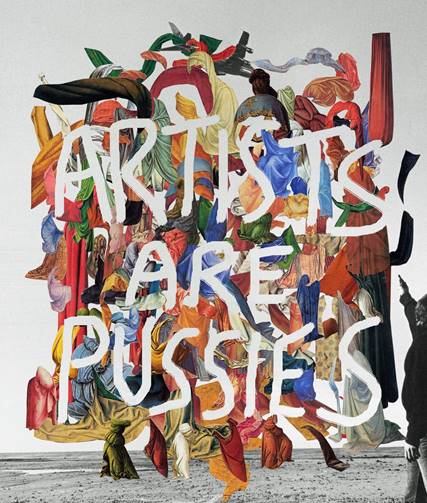 While British culture has predominantly been the artist’s focus in previous work, this exhibition addresses American culture, in particular it’s positioning of masculine identity and the division of the world into ‘good guys’ and ‘bad guys’. On the walls of the gallery Oliver presents a series of collaged relief ‘paintings’, some made with found oorboards and another piece shaped like a now-defunct VHS display unit. They present various sampled imagery including: George Bush’s painted portrait of Vladimir Putin from 2014, a courtroom photograph of OJ Simpson learning he had escaped conviction in 1995, and a reproduction of Norman Rockwell’s painting The Connoisseur of 1961, which gently lampooned the then cutting-edge drip work of Jackson Pollock. These images are physically disrupted and remixed by Oliver, charting surreal connections between visual culture and mainstream politics. 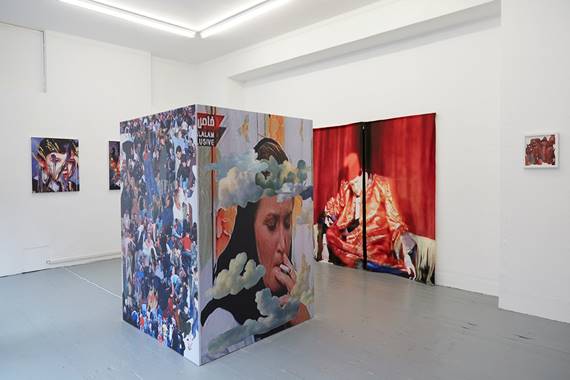 Specically British elements do surface in the show however, in particular Oliver’s fascination
with football terrace culture. In his view chants and banners can be appraised as a unique folk art-form, demonstrating remarkable inventiveness and spontaneous humour – but a humour that often slides into poor taste and the highly offensive. But on occasion terraces can be the site of genuine and e ective political protest. The OJ Simpson painting hangs on top of wall-sized print of Liverpool FC fans on The Kop holding up a banner reading ‘Expose the lies before Thatcher dies’ in reference to the Hillsborough disaster. Such provocative and seemingly incongruous layering is symptomatic of Oliver’s approach of, as he describes it, ‘mangled personal nostalgia’.

And You Thought I Was Bad? is concerned with the circular nature of time, and what it meant to be obsolescent and essentially out of date. The exhibition ironically re ects on the e cacy and value of political protest in art, with the central lm piece having a self-important and perhaps self- righteous art student archetype at it’s centre. However, in a sincere way, Oliver is also trying to touch upon the expectations placed on artists to be conduits for cultural events, and the complex nature of political agency today.

Artist’s Presentation Event: Sunday 5 August, 3pm.
Exploring the incongruous and often absurd intersection of politicians and pop culture, the artist presents a musical performance lecture, alongside a screening of his work Songs Of Eternal Praise, 2016–17.
Zabludowicz Collection Invites is a programme of solo presentations by UK-based artists who do not currently have representation by a UK commercial gallery. 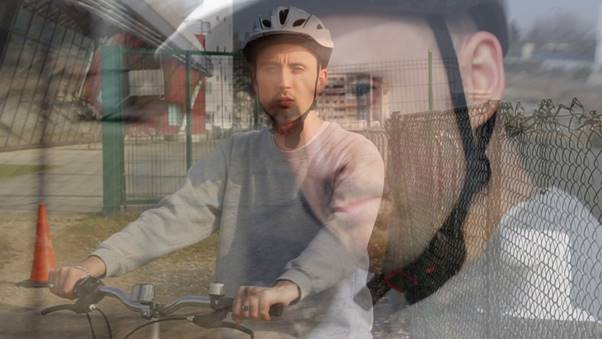