Greenwich+Docklands International Festival and 14-18 NOW are proud to present Fly By Night – a breath-taking, site-specific installation by American artist Duke Riley, hosted by Peabody in Thamesmead.

Nightly, from 20-23rd June, the dusk skies over Thamesmead river-path will play host to a collaborative performance of unprecedented scale and beauty, as 1500 LED-carrying pigeons take to the air – elegantly swooping, twirling and gliding – acting out an astonishing avian dance over the heads of visitors, and the River Thames.

After months of on-site training by Riley, the extraordinary bond between artist and animal is so strong that he is able to ‘conduct’ the flight, influencing the birds’ movement through intuitive gestures and sounds – improvising and adapting his instructions as the birds react to the changing elements, and each other.

Pigeons have been domesticated for thousands of years and cared for by people around the world who were drawn to them for their companionship, service and sport. Riley’s own relationship with the birds began when, as a child, he rescued one that later become his pet. His fascination grew through his time at art school, when he lived in a rooftop coop, and his many years in New York, where he is now integrated in the city’s pigeon-fancying community. In 2012, the birds became part of his art practice, with homing pigeons featuring in his Havana installation ‘Trading With The Enemy’.

“I used to observe pigeons within the city and wonder at their ability to thrive as the urban landscape encroached on them. It seemed to me they were survivalists in an hostile environment imposed by humans. As I became more involved with the community, I realised that, in fact, these birds had chosen to remain around us. That there is an ancient, unwritten contract between people and pigeons, that can’t ever really be broken. This instinctive bond intrigues and inspires me, and I hope to affect those feelings within the people who engage with my work.” Duke Riley

As well as celebrating this unique domestic relationship, Fly By Night pays homage to military pigeons, some of the unsung heroes of the First World War, a century after its end.

More than 100,000 pigeons contributed to the British war effort, carrying messages from ship to shore, from battlefield to command post, and from pilots to forces on the ground. Some 95 per cent of messages arrived safely, changing the course of battles and saving numerous lives. In Fly By Night, the leg bands that once carried those vital military messages are replaced by LED bulbs, turning these already beautiful birds into a glorious, night-time spectacle.

“I have always had an interest in military and naval history and those themes have often been key in my work. As long as there has been war, humans have used pigeons in battle. The First World War is particularly fascinating as the tools of fighting suddenly advanced technologically, providing powerful munitions and new forms of transport. Swords, rifles and horses were upgraded to machine guns, tanks and warplanes, increasing the reach of battle, and the death toll, significantly. However our means of long-distance communication were still limited, and the role pigeons played cannot be underestimated. Fly By Night is intended to make sure it’s also not forgotten.” Duke Riley

Onsite, the purpose-built coop further reflects this historical association, drawing inspiration from the mobile pigeon lofts taken into the battlefield. The installation’s location is also significant. Thamesmead and neighbouring Woolwich have a strong connection to the forces, and this particular site was chosen after a period of thorough research in partnership with the Imperial War Museum. The East End was also home to London’s now often forgotten culture of pigeon-fancying, and the communities that formed around it.

As Fly By Night spectacularly illuminates the sky, bringing art and nature together, it also shines a light on the very special relationship between pigeon and humankind, inevitably opening up new perspectives to all who view it.

Fly By Night runs as part of LIFT and Greenwich+Docklands International Festival from 21st-23rd June 2018, with a free community performance on 20th June. Duke Riley creates accompanying physical work for all his performative projects, inspired by his subjects and collaborators. A series of artefacts inspired by Fly By Night London, including paintings and mosaics, will be exhibited in the city later in the year. Details TBA. www.dukeriley.info 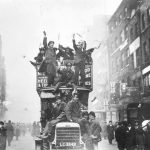 A new poem by Carol Ann Duffy written to mark the centenary of Armistice Day has been released today. Danny Boyle invited Duffy to write a poem as part of Pages of the Sea,

PROCESSIONS takes place this Sunday 10th June across the four capital cities of the UK: Belfast, Cardiff, Edinburgh and London. Tens of thousands of women have already signed up to take part in this once-in-a-lifetime mass participation artwork, celebrating one hundred years since the first British women won the right to vote. 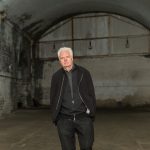 Everything that happened and would happen by German composer and artist Heiner Goebbels will receive its world premiere in Manchester this autumn. The work integrates live music, performance and large-scale multimedia installations and will take place in the vast space of Mayfield, an historic former railway station.