Laurie Simmons is one of the most significant artists of the past forty years and a pioneer of the critique of photographic imagery associated with the ‘Pictures Generation’ of the late 1970s and early ’80s in New York. 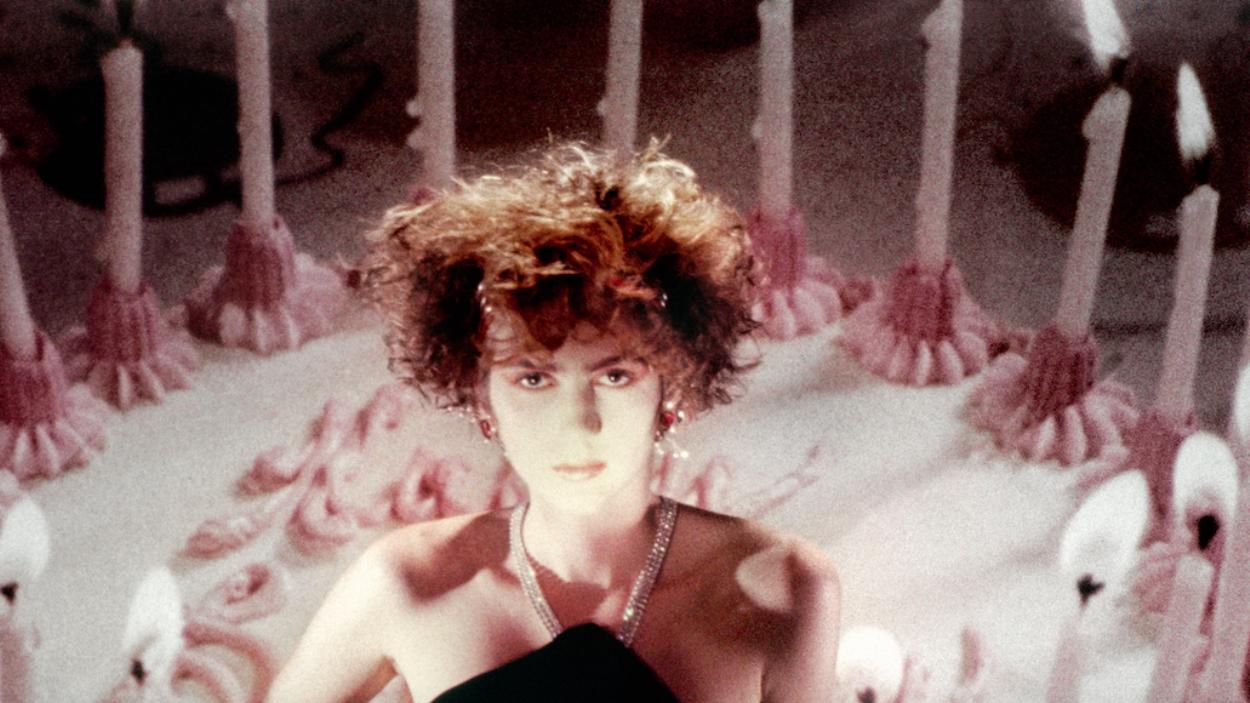 In 1984 one of Simmons’s newly minted ‘Fake Fashion’ photographs was chosen for the cover of Double Trouble, a themed issue of the incisive and influential ZG Magazine, published in collaboration with Art and Text. In this series, Simmons simulated fashion photography using garments acquired from junk shops, combined with projected backdrops recycled from earlier works. These included her iconic dolls-house furniture scenarios, various underwater scenes and images of popular tourist destinations. In a feature article in the magazine, the critic Rosetta Brooks related Simmons’s work to emerging theories of photography and simulation: ‘Whilst the photography of simulated worlds seems like a regression within the medium, for artists like Simmons it is a desire to get at what makes it real, what makes it happen.’ 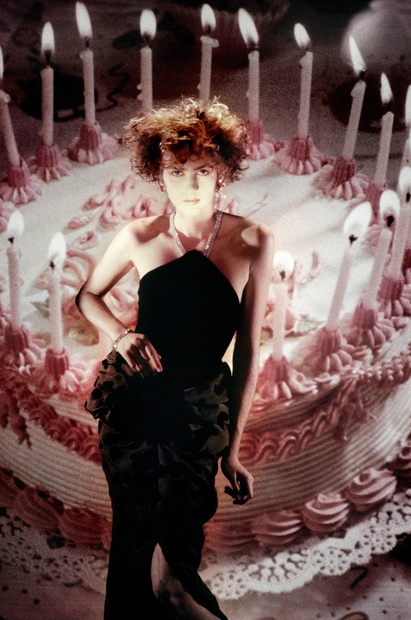 In a cultural climate typified by art’s appropriations of popular culture, music’s experiments with the coverversion (mixing, dubbing, scratching) and a flood of movie remakes and TV reruns, an issue of ZG dedicated to the idea of ‘the double’ was timely; especially in the context of concurrent scientific developments in human cloning and the allure of the alternative worlds offered by computer games. The issue also included an essay, ‘Clone Story, or the Artificial Child’, by Jean Baudrillard, the era’s most acclaimed theorist, and Brooks opened her feature with a quotation from one of his texts: ‘Information devours its own contents; …instead of causing communication, it exhausts itself in the act of staging the communication; instead of producing meaning, it exhausts itself in the staging of meaning.’ 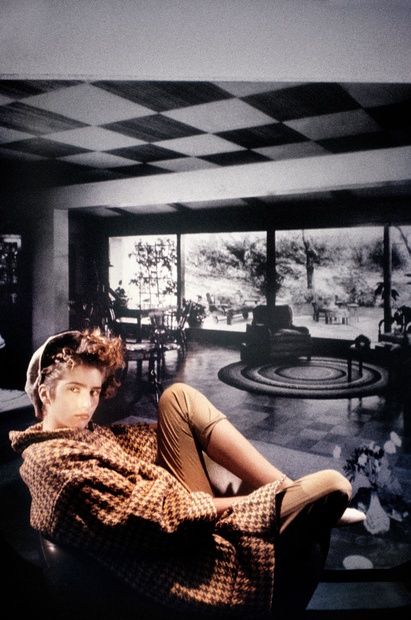 Fast-forward to 2018 – the post-internet age of fake news, fabricated images and fictive identites – and Simmons’s ‘Fake Fashion’ photographs add to their still uncanny presence an equally uncanny prescience. As Omar Kholeif observes in his preamble to the recent milestone volume You Are Here, Art After the Internet, 2014: ‘Designed’ culture has subsumed us with its functional and programmed infrastructure… [We] have invested machines with our ultimate desires – the desire to be as efficient, attractive and connected as possible. 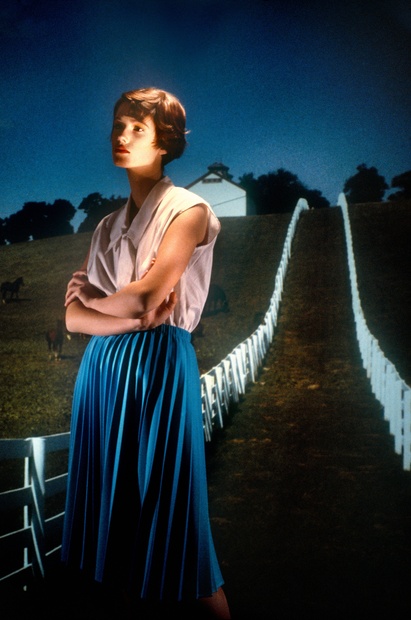 These conditions have developed rapidly since the millennium, altering the way human relationships are brokered, the manner in which global conflict is reported and the way culture is produced and distributed.’ Simmons’s remarkable series of photographs, at once epochal and newly compelling, was sparked by her interest in fashion photography at a time when figures such as Richard Avedon and Patrick Demarchelier were becoming superstars. In a moment where photographers were creating editorial-like ad campaigns, she felt compelled to create ‘a shadow of a fashion photograph that wasn’t selling anything in particular.’

Her mimicry of the genre was ‘a desire on my part to understand the construction of the fashion message’ in works that display both a fascination with and a critical appraisal of fashion photography. While the ‘Fake Fashion’ photographs heralded, in the first instance, the manipulated imagery that would shortly inundate fashion publications, the more crucial questions they raised more than thirty years ago also anticipate the problematic prevalence of ‘the fake’ in so many aspects of contemporary culture. 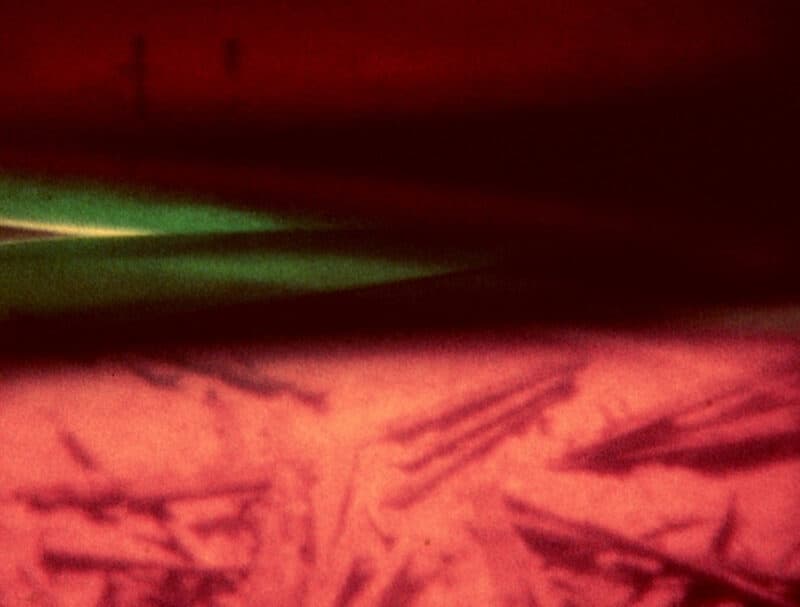 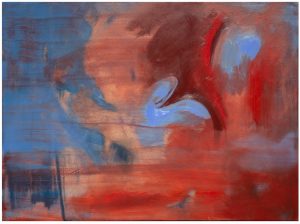 Julia Dubsky’s paintings weave a playful web of references to the history of painting and ideas drawn from literature. 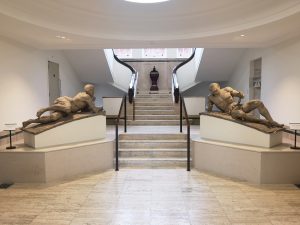 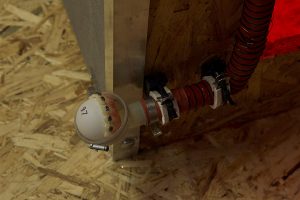 For Cabin Pressure Jenkin van Zyl reconfigures Amanda Wilkinson Gallery into a fortified crate that alludes to van Zyl’s forthcoming film: In Vitro. Partially filmed on an abandoned film set on a frozen shore in Iceland