New JR exhibition featuring: mixed media works, each encompassing preparatory notes, photography and architectural drawings relating to the GIANT series to open in London. This will be a first for the artist’s GIANTS series outside of private studio visits. JR created a series of new 3D outdoor sculptures across Rio de Janeiro, depicting athletes whose identity was blurred behind the “perfect motion” of an instantly recognisable Olympic event: diving, high jump and swimming. 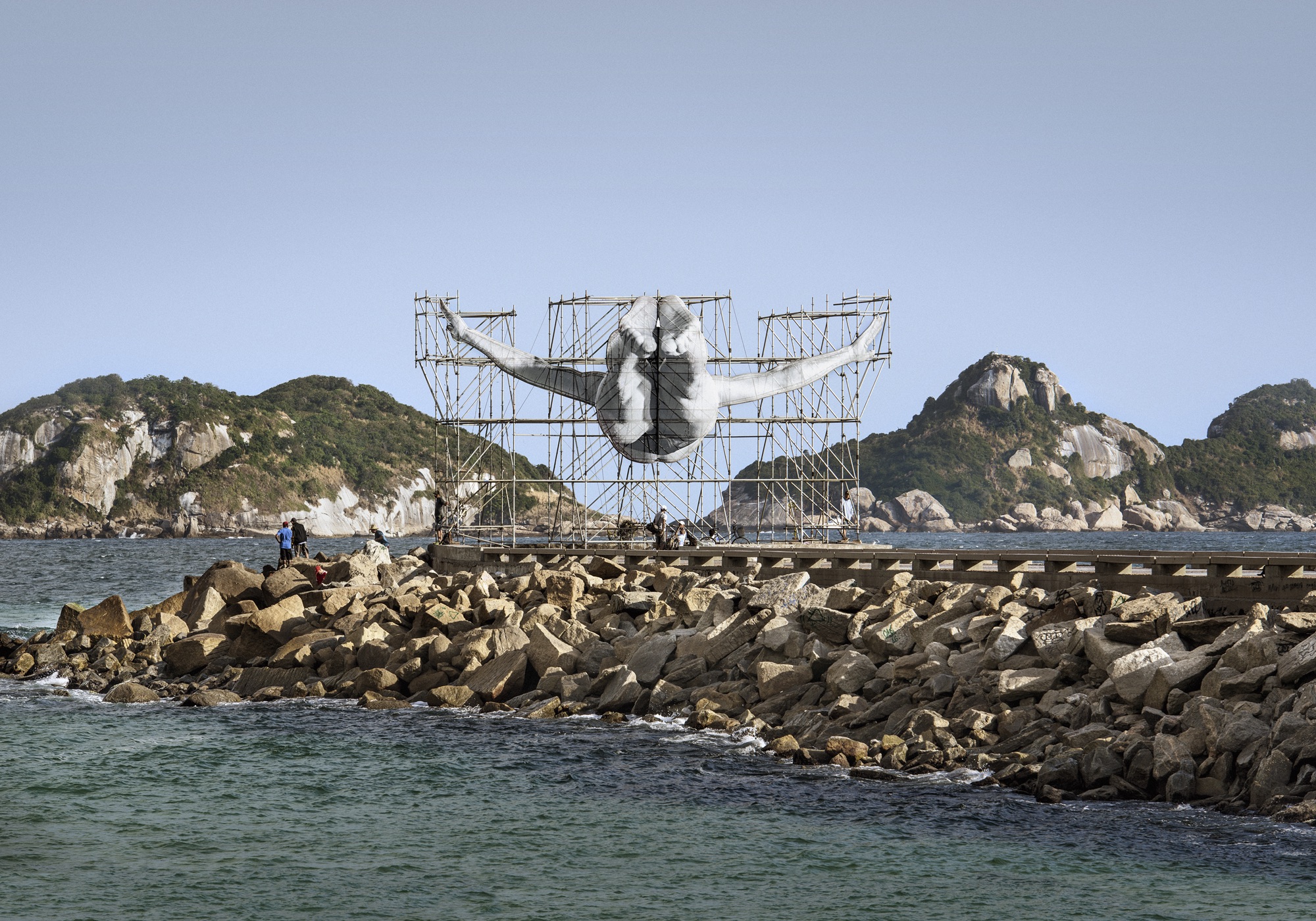 In addition to the gallery exhibition, an entirely new image will be used to re-create a GIANT installation on the exterior of the new Lazinc gallery on Sackville Street for the opening of the show this January.
Having had his debut show at Lazinc and having formed part of the gallery’s initial roster of artists,

TED prize winner JR has been working with Steve Lazarides since 2008 and has remained a constant addition in the gallery’s programming alongside his own ambitious global projects. Some of his most recent projects
include a 70-foot installation on the US / Mexico border in Tecate and a film with Agnès Varda that won the
best documentary prize at Cannes Festival 2017.

The exhibition follows JR’s current exhibition, ‘The Wrinkles of the City, Instanbul: Body of Work’, at Henrik Springmann Gallery, Berlin and continues a new method of presenting the artist’s developmental process and large-scale community projects.

About The Artist
JR exhibits freely in the streets of the world, catching the attention of people who are not typical museum visitors. After finding a camera in the Paris metro in 2001, he started photographing people and pasting their portraits in the streets, undergrounds and rooftops of Paris. JR creates “Pervasive Art” that spreads uninvited on the buildings of the slums around Paris, on the walls in the Middle East, on the broken bridges in Africa or the favelas in Brazil. In 2006, he created Portrait of a Generation, portraits of suburban “thugs” that he posted, in huge formats, in the bourgeois districts of Paris. In 2007 he worked on Face 2 Face, the biggest illegal exhibition ever and in 2008, he embarked on an international trip for Women Are Heroes, in which he underlines the dignity of women who are often the targets of conflicts. In 2011 he received the TED Prize, after which he created Inside Out, an international participatory art project that allows people worldwide to get their picture taken and paste it to support an idea and share their experience. He worked in Rio de Janeiro during the 2016 Olympics and created new gigantic sculptural installations using scaffolding, at the scale of the city, putting an emphasis on the beauty of the athletic movement.

His latest projects include a museum exhibition dedicated to children at Centre Pompidou, a permanent collaboration with the Brazilian artist Os Gemeos at Palais de Tokyo in Paris, in a space used to store stolen pianos during World War II, a film with Agnès Varda, co-directing a movie with the Nouvelle Vague icon, traveling around France to meet people and discuss their visions. The most recent project will run from December 2017 – March 2018 at Chateau La Coste.

In 2016 JR returned to Clichy-Montfermeil, in the Paris suburbs, where his artistic adventure first began 14 years ago with Ladj Ly; his closest connection to the neighbourhood. Both decided to create a monumental mural showing a singular portrait of the community there, which was inspired by the Mexican muralist; Diego Rivera.

JR is represented by Galerie Perrotin; he has had shows in Paris, Hong-Kong, Miami and New York. In 2013, JR got his first museum retrospectives in Tokyo (Watari-Um) and CAC in Cincinnati, followed by Frieder Burda in Baden-Baden in 2014 and HOCA Foundation in Hong-Kong in 2015. JR is also represented by Lazarides in London, Magda Danysz in Shanghai, Simon Studer Art in Geneva and Springmann Gallery in Berlin