COS opens New Spring, Miami by Studio Swine, an interactive installation presented at the Temple House, an art deco building in Miami’s South Beach. The work, which comprises of a central sculpture that emits mist-filled blossoms, is the second in the New Spring series. It was conceived following an open brief from COS for the brand’s 6th Milan Design Week presentation during Salone del Mobile 2017 and will be open to the public until 10 December as a satellite of Design Miami/ 2017.

Studio Swine said of the installation,

“We wanted to encapsulate a lifespan of emotions in an instant. To create a multisensory experience that was fleeting, but in its time evokes joy and vitality, if only to remain as a memory. New Spring, Miami couples this ideal with the environment it inhabits; energized by the inspiration the city and its remarkable style has given us. We’re so pleased to see the work live on and reach new audiences”. 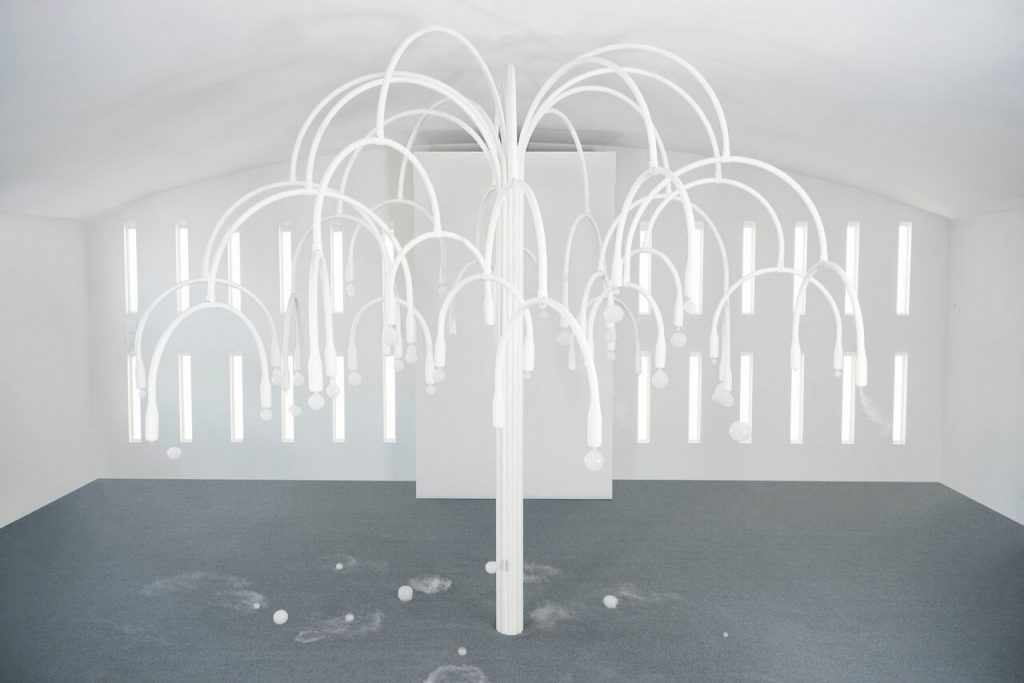 New Spring, Miami responds both to the environment of Miami and the curvilinear, art deco location. Each blossom will be filled with one of five scents inspired by Florida and its flora. In addition to the central sculpture, Studio Swine has designed new element, an inflatable sculpture to inhabit the Temple House’s rooftop pool.

Studio Swine has also designed a concept shop on the mezzanine of the Temple House, which draws inspiration from the work. The concept shop will house a tonal selection of COS pieces specially chosen by Creative Director, Karin Gustafsson. The edit is inspired by the translucent, almost-there nature of the blossoms while reflecting the tactility of different materials used in COS collections, a key element of the brief given to Studio Swine at the conception of New Spring.

“Design Miami/ is thrilled to partner with COS for our 2017 show,”

“Experiencing COS and Studio Swine’s New Spring installation at Milan Design Week was especially meaningful for Design Miami/ as Studio Swine were selected by us as 2015 Designers of the Future. Collaborating with a thoughtful brand like COS who continues to support new and emerging talent in innovative ways is extremely satisfying and we all look forward to bringing this energy and vision to the fair with Studio Swine’s multi-sensory, interactive offering for all design enthusiasts to enjoy in Miami.”

The installation will be located at The Temple House, 1415 Euclid Ave, Miami Beach from Wednesday 6 December until Sunday 10 December 2017.

About Studio Swine (Super Wide Interdisciplinary New Explorers) is a collaboration between Japanese Architect Azusa Murakami and British Artist Alexander Groves. Creating works that span across disciplines of art, design and film, Studio Swine explores themes of regional identity and the future of resources in the context of globalisation. Studio Swine work manifests a deep research into materials and modern industrialisation. Studio Swine has been widely exhibited at institutions such as the Victoria & Albert Museum in London, Museum of Art and Design New York, and the Venice Art Biennale. studioswine.com

About Design Miami/ is the global forum for design. Each fair brings together the most influential collectors, gallerists, designers, curators, and critics from around the world in celebration of design culture and commerce. Occurring alongside the Art Basel fairs in Miami, Florida, each December and Basel, Switzerland, each June, Design Miami/ has become the premier venue for collecting, exhibiting, discussing, and creating collectible design.
designmiami.com