Hosted by the Austrian Cultural Forum in Knightsbridge, Emotion + the Techn(no)body features nine international artists.  Its purpose is to explore cultural relationships with data and the human body’s engagement with technology.

These are the days after all of unparalleled proliferation in data generation, which in some respects opens up to the individual a whole new sphere of anxiety, addictions and forms of quasi-spiritual immersion.  By coincidence, this exhibition runs at the same time as Blade Runner 2049’s general release and one may wish to ponder upon reflection of this exhibition to paraphrase that particular fictional universe’s genesis, do humans now dream of electric sheep?

The exhibition has originality running throughout its exhibits and mercifully without the obvious gimmicks that can so easily be thrown at proverbial wall for such a subject matter.  We are gifted flickering monitors, responsive installations and cleverly engineered sound art presented with a sense of fun and ingenuity.

Stephen Cornford’s work Saturation Trails presents a deconstruction of the digital image sensing process.  He has devised processes that change the state of the sensors and outputs that they generate through exposure to infra-red laser pulses, hydrofluoric acid and x-ray radiation.  This is analog hacking.  It is science with experimental processes explored in laboratory environments and in its resulting aesthetic of fluctuating and flickering pulses shares a commonality with auto-creative art.

What Cornford’s work does is to change the physical state of the technology that he is working with.  At a time when machine learning seems to be striding inexorably to the realisation of sentient computing with all the ethical fireworks that this promises to ignite; it is interesting that he has chosen the digital eye as the subject for his scalpel of acid and radiation.  The eyes are after all, the window to the soul. 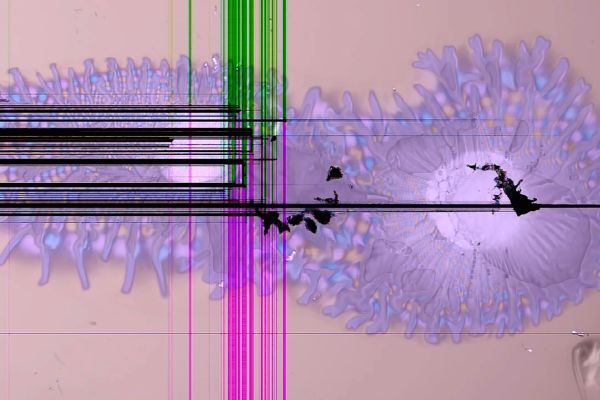 Canadian Audrey Samson’s Goodnight Sweetheart explores the idea of the death of one’s digital self.  She has grandly embalmed smartphone two devices in resin, reflecting how such devices (and the secrets, footprints and traces of our lives that they hold within their memory chips) are elevated to such great attachment for so many during their operational life.  It makes one think of the odd tradition of embalming a beloved family pet to preserve their presence minus the living, breathing joyfulness of their participation in our lives. 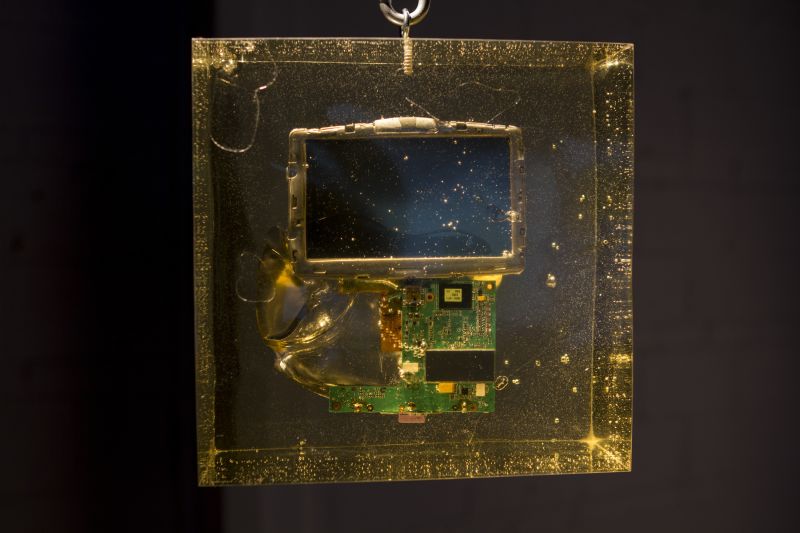 Benedict Drew’s Heads May Roll (Radio Edit) explores a fantastical future world with a critique of consumption and the exhaustion of image, word and body within that context.  It was originally commissioned as part of a large scale installation in 2014 and is one of the most satisfying of the works presented at this exhibition.

Perhaps the most exciting, playful and engaging of all the work in the exhibition comes from Austria’s Christine Schörkhuber.  At this exhibition and throughout the accompanying festival, a contingent of Austrian artists have performed and exhibited work that has highlighted a wealth of experimental talent, emotional intelligence and apparent simplicity in the delivery of effortlessly sophisticated art work to enjoy.  There has also been a dash of avant-garde retro cool too, if this not a contradiction in terms and in no way should be misconstrued as to undermine the authenticity of the work concerned.

Schörkhuber’s Something In The Air – I do not know if this is an accidental reference or not to the experimental jazz pianist Andy “Thunderclap” Newman – is a stand out work in the exhibition collection.  Visually it is compelling and enjoyable to explore.  It is a stack of ventilator fans that operate in intricate harmony to amplify a pre-recorded sound file.

There are multiple dimensions and sensory experiences at play here.  Visually, there are the precisely rotating, multi-faceted components of the main device and the shadows that are cast across the immediate exhibition space.  The clever manipulation of air pressure and flows, allows the viewer to sense the breath of the work touching upon their skin and the audio produced, slightly abstracted, encourages closer inspection of the work to interpret the language embedded within waiting to be decoded by closer inspection.

The most ambitious of the work presented is Ulla Rauter’s Sound Drawings.  Using custom software, a camera and UV lights, it produces vocal fingerprints of human speech and projects these onto walls.  It is a reflection of identity ownership in the age  of digital data.  There is a sense of ritual too, that this may be a kind of mausoleum to the human soul in some distant possible future.  It is particularly pertinent in the landscape of today’s culture of consumer communication technology.

Voice recognition is becoming increasingly ubiquitous as a means to operate the every day smartphone device and to facilitate other domestic tasks such as ordering one’s shopping or checking one’s diary.  Presented here is a more forensic artefact of language.  It parallels the news recently of the Apple iPhone X, which will use facial recognition as its primary means of access to its wonders of technology.  Rauter’s work, rather like the iPhone, takes something very human and personal (e.g. the voice) and encodes it as digital representation which if scaled to a great database would serve as new form of language.  Apple is now creating a great database of the human face, that will judge and interpret through the measurement of many data points the validity of its users.  It is beckoning in age where we all be judged at face value and by digital eyes without the traits of human compassion.

The exhibition as a whole works successfully and has been complimented by a series of events across London over the past fortnight.    Reni Hofmüller, Theresa Schubert, Davide Bevilacqua, Graham Dunning and Veronika Krenn also exhibit; all deserve greater inspection than provided here.  It is a testimony to the exhibition’s curation by Sally Golding, that the artists who are participating are presenting from a background of conceptual strength, depth and authenticity.

This is an exhibition of informed work that address the issues of today and those of the near future through eyes that draw influences from the avant-garde of the mid to late 20th century.  As a great theorist and practitioner of that epoch’s avant garde, Gustav Metzger, once said in defence of his work, these are ideas that were ahead of their era and that would perhaps see their greatest influence outside of his own lifetime.  Emotion + the Tech(no)body seems to be proving his analysis correct, this is art born of solid theory, innovative practice and satisfying quality of execution. 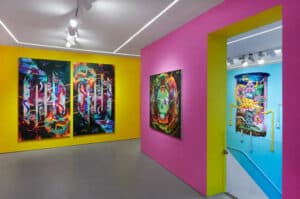 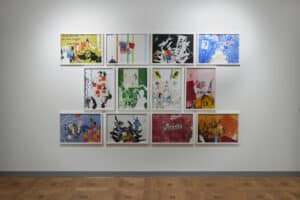