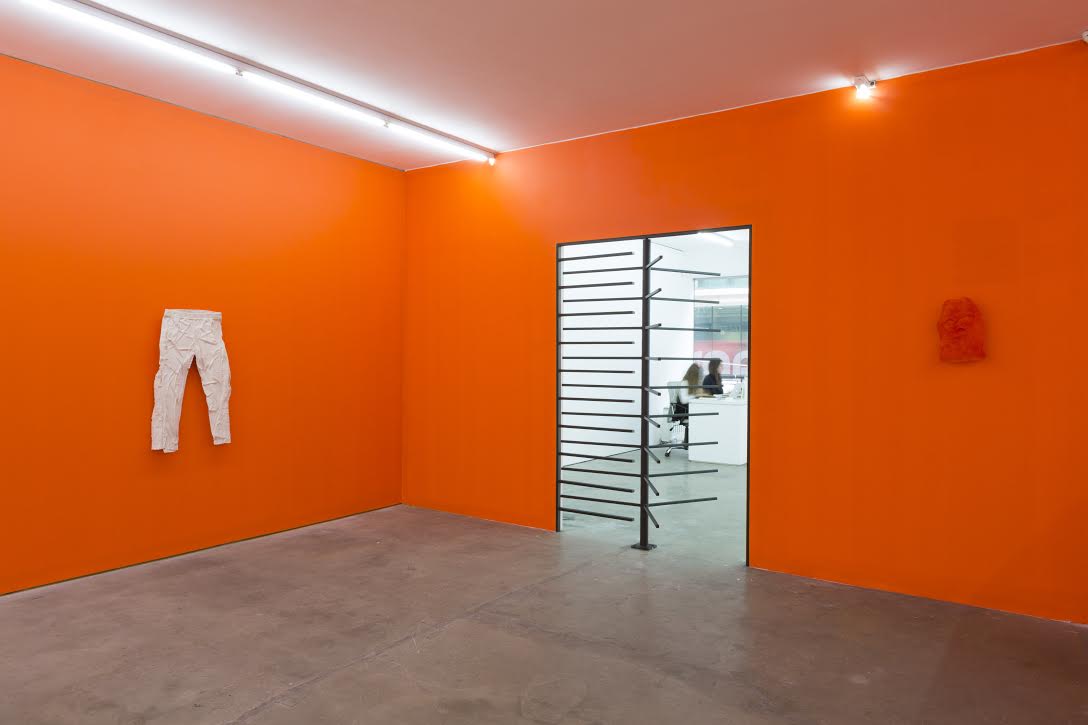 A crowd is not a mob, but it can become one! Each crowd…even the most casual, has latent potential for widespread civil disobedience. Raymond Momboisse, 1967

Over four years, Marcin Dudek has explored the materials, messages and political contexts of the stadium in an ongoing investigation of group behaviour and crowd control. Steps and Marches is Dudek’s third solo exhibition at Edel Assanti, and takes place in two chapters, in London and at Harlan Levey Projects, Brussels. The London stage of Steps and Marches delves into the march of mass movements; Brussels hones in on the steps of individuals who shape these events. 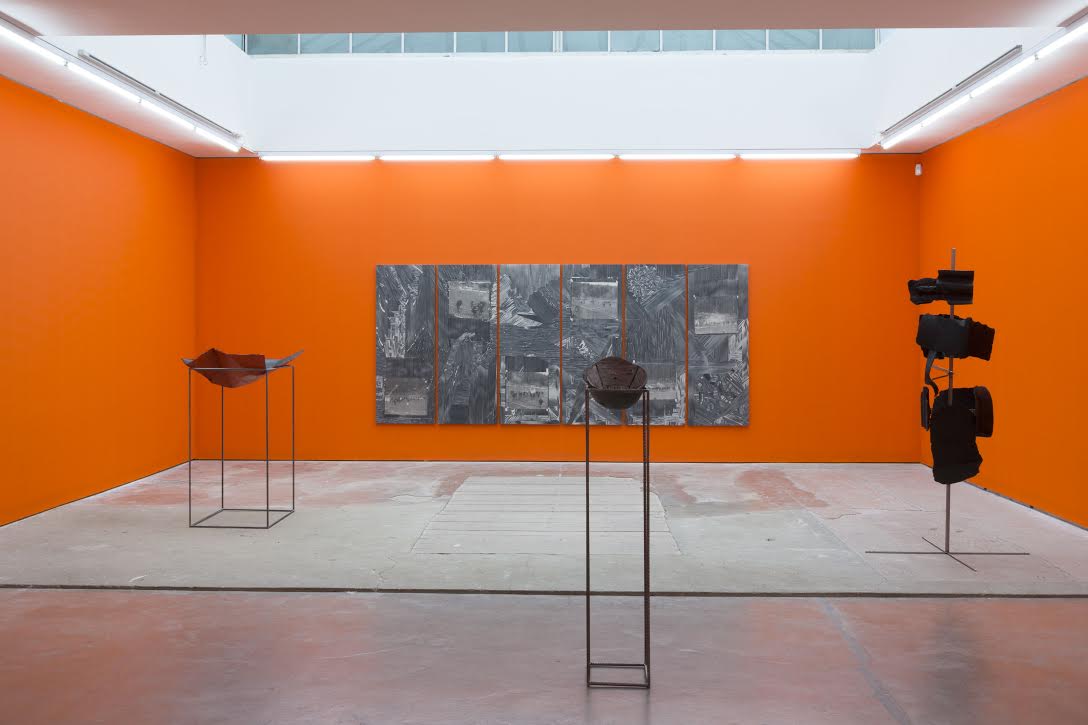 The two chapters respectively begin with the artist retracing his steps as a teenage member of Cracovia football fan club. Thumbnail-sized photographs drawn from Dudek’s personal archive depict a sequence of events on the way to and from the stadium to watch a match between Poland and Romania in 1995. The intimate scale of these images signify the artist’s complex relationship with a time in his own past in which he was lost in a violent crowd, narrowly escaping disaster. The photographs face a jesmonite cast of Dudek’s Cracovia balaclava, reappearing following its inclusion as the substance of a performance in his 2015 exhibition at Edel Assanti, We stumbled as we clambered, in which the artist violently assaulted his own e gy. In its original context, the balaclava provided anonymity whist acting as a uniform transforming the individual into part of the crowd. Here, its sculptural counterpart is titled Wara – the nickname of one of Dudek’s friends from the Cracovia club – in a gesture that restores individual identity to the enigmatic mask.

Armed with social sciences, spectators seated far from the stadium have long posited that when immersed in the crowd, individuals will submit their autonomy to mass collective will, sidelining their own rationale or morality – a phenomenon referred to by psychologists as “groupthink”. This is an idea brought forward in Charles Mackay’s book “Extraordinary Popular Delusions and the Madness of Crowds,” the influential social science of Gustav Le Bon during the French Third Republic, and many others. Dudek integrates such scientific testimony into his practice, employing hooliganism, spectacle, architecture and crowd disasters as vehicles to explore the transformation of a mass of individuals into a volatile, singular entity. His own history lends anthropological insight and concerns. Were his friends knowingly acting immorally? What responsibility does he bear, and what do authorities have to do with the violence of spectacle, its collapse and legacy? How will the public view of the crowd di er from the view of those that shaped it?
The second room of Steps and Marches is accessed via a painted steel turnstile sculpture, Recovery and Control, forcing visitors to enter the exhibition one at a time. The main gallery space is painted orange, the colour of the lining of bomber jackets worn by Dudek’s crew, turned inside out during violent outbreaks. The colour recalls Dudek’s performance “Saved by an Unseen Crack” at Harlan Levey Projects (2015), which forced visitors into an orchestrated reenactment of the Heysel stadium disaster on its 30th anniversary. Well Washed is another jesmonite cast, this time of an Adidas tracksuit, the adopted uniform of football fans across Europe. This particular pair belonged to Dudek’s brother on a day in which he was stabbed in the leg in a confrontation at a match. The bloodstains of the original are washed away by the unpigmented cast – but the title equally references a phrase used by Roman spectators to gladiatorial combat when baying for more blood. 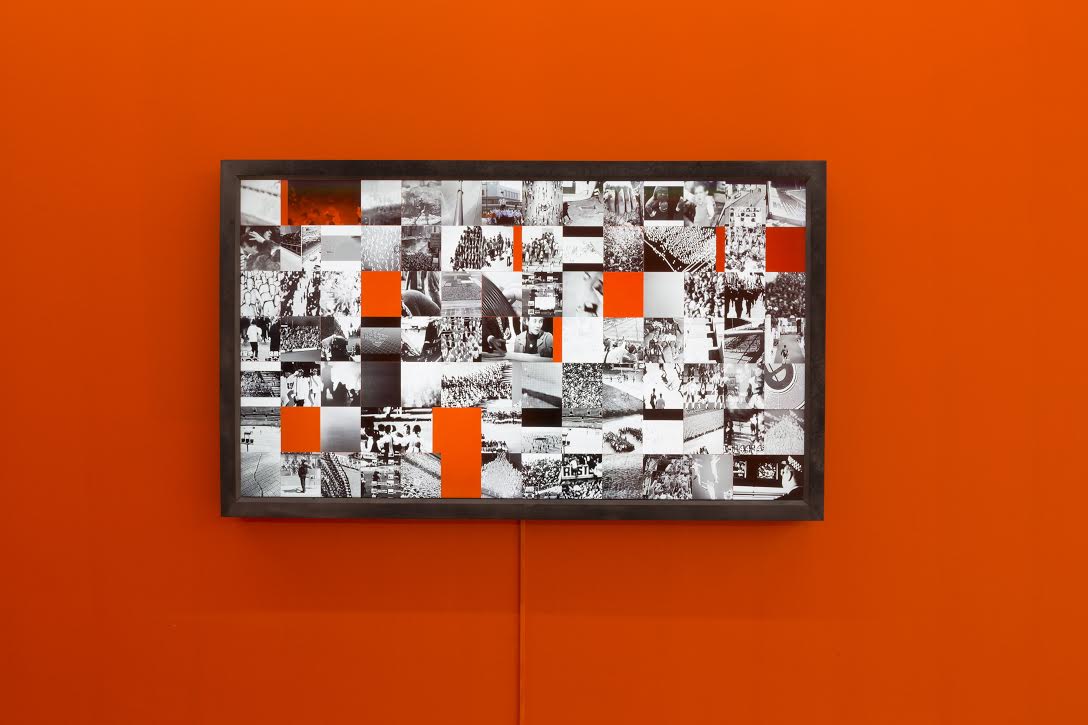 The film on the opposing wall consists of a mosaic of looped black and white videos collaged against the backdrop of performance archive footage, in which Dudek employed orange smoke flares to engulf a gallery space. Collectively, the videos present a one-year diary of Dudek’s research. The excerpts cover diverse subject matter, ranging from crowd-control software renderings to documentation of eruptions of crowd violence and historical footage of political assemblies and “mass play”. 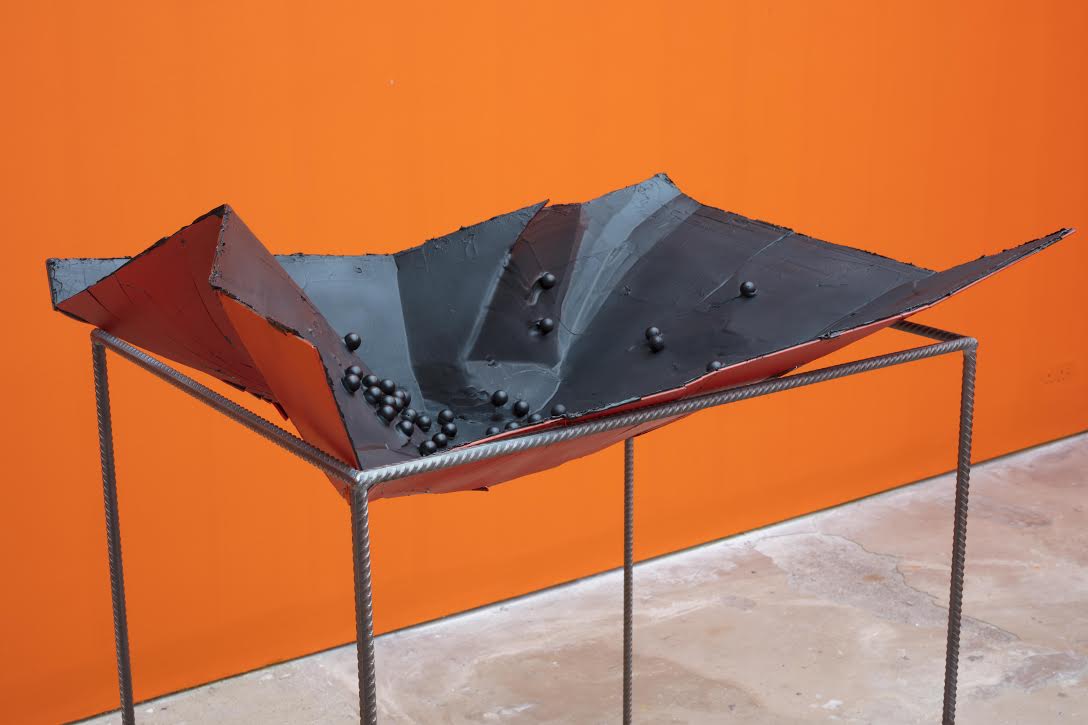 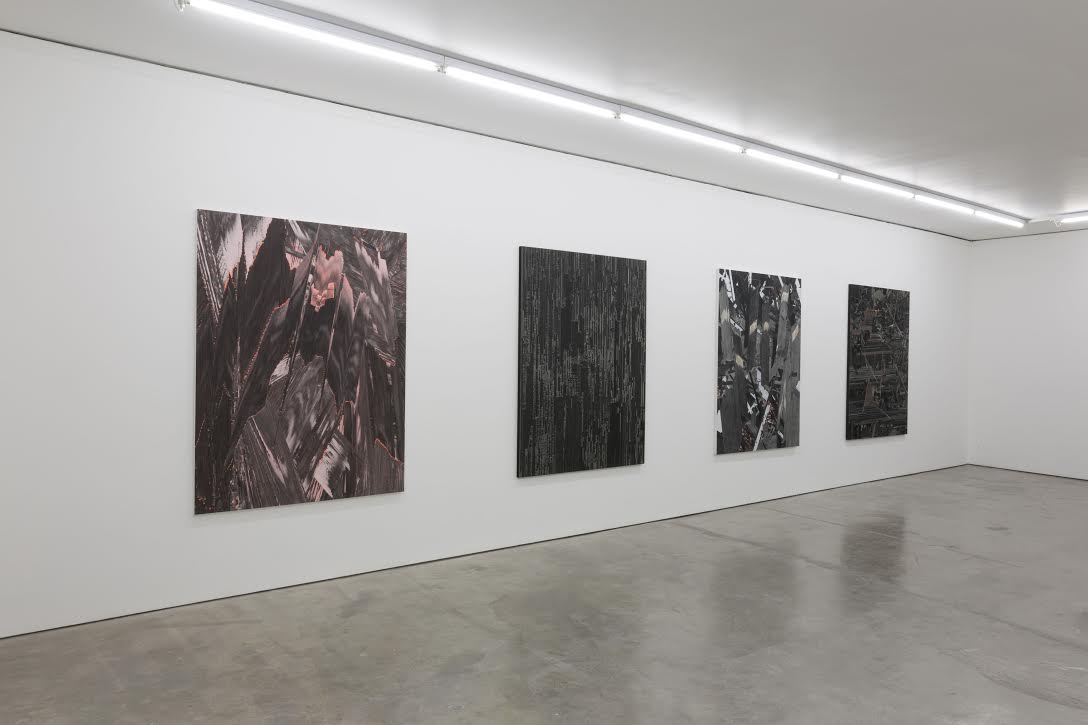 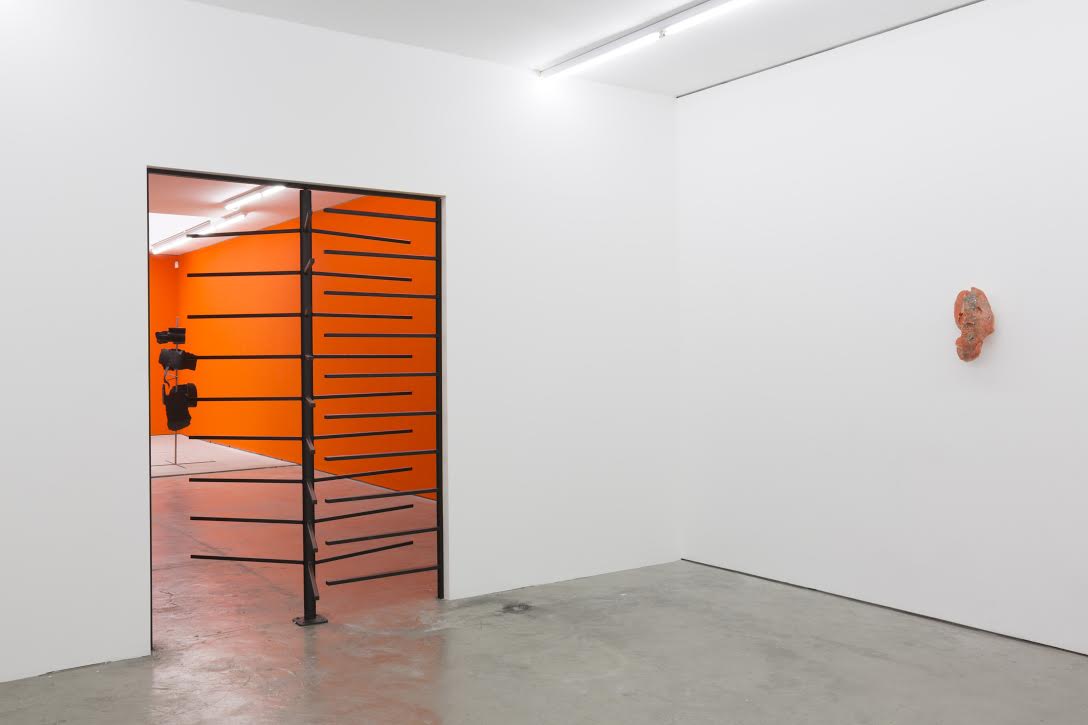 Three sculptures in the center of the room evoke to the vulnerability of the body in its absence: protection, breaking, shielding. Total Event is an upturned, standard-issue Soviet army helmet filled with a lead cast of the terraces of the stadium – the earliest architecture of spectacle dating back to Ancient Greece, equally alluding to the life-sized installation in the Brussels chapter of Steps and Marches. Such helmets were a mainstay in Poland during and immediately following the Soviet era, worn by military, militia and the riot police deployed to combat stadium violence. Casual and Acting is comprised of a group of manipulated casts of stadium seats, often torn o and used as projectiles during riots. The texture of the casts originate from Dudek’s tape collages, whilst the undulating forms are inspired by theorist Raymond Momboisse’s theories of di erent possible crowd behaviours: casual; conventional; expressive; aggressive. The Mob Was Present is a topographical sculpture, made of glass and silicone, smashed by rubber bullets frozen at the moment of impact like breaking skin.

Rubber bullets were first used against the public in Poland in 1997 in Gdynia, at the last game that Dudek attended. The Confidence Frame is a six-panel collage made using ga er tape and image transfer. The images are drawn from police surveillance footage, depicting a sequence of moments in which fans confront riot police on the pitch. Dudek’s combination of collage and third-person documentation serve as an aesthetic representation of his reworking of memory, attempting to recall his own involvement, perspective and responsibility long after the adrenaline has subsided. Dudek has often referred to his collaging technique as a kind of therapy, which began in the earliest stages of his artistic practice as a means of assaulting uniform geometry. He employs a mastery of this unusual artistic medium to convey mass movement through space and architecture, and the dynamism of crowd behaviour, from order to chaos. The title of the work comes from the following phrase in M.J. Apter’s book The Dangerous Edge: The Psychology of Excitement: “The confidence frame applies to those who actually engage in risky endeavours…it allows them to take what, to outsider observers, may seem like insane risks, and feel confident in their mastery of the skills necessary to remain safe.”

About The Artist
Marcin Dudek studied at the University of Art Mozarteum, Salzburg, and Central Saint Martins, London, graduating in 2005 and 2007 respectively. Dudek has exhibited internationally at venues including Moscow Museum of Modern Art, Kunstlerhaus, Salzburg, the Arad Art Museum and the Goethe Institute, Kiev. His installation “The Cathedral of Human Labor”, 2013, in on permanent view at the Verbeke Foundation in Antwerp, and his work is currently included in Solstices at the BWA Contemporary Art Gallery in Katowice and will be shown at the Trafo Center for Contemporary Art in December 2017