Soul of a Nation: Art in the Age of Black Power - FAD Magazine
Skip to content 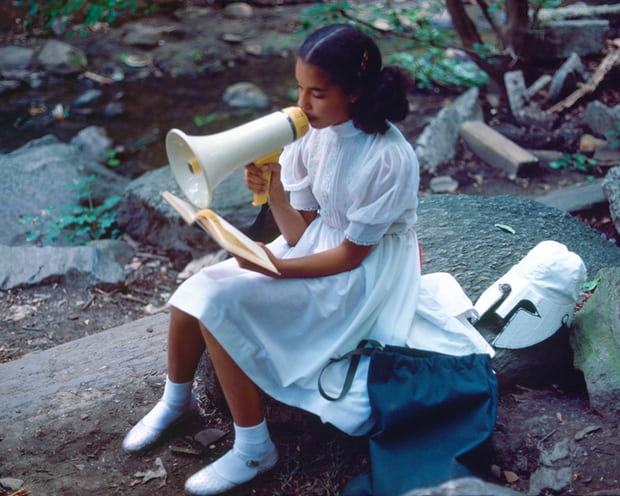 This article titled “‘The ghetto is the gallery’: black power and the artists who captured the soul of the struggle” was written by Steven W Thrasher, for The Guardian on Sunday 9th July 2017 15.00 UTC

Can “the soul of a nation” be defined by artists of its most oppressed group? That’s the ambitious goal of Soul of a Nation: Art in the Age of Black Power, about to open at London’s Tate Modern. Through 150 artworks and more than 60 artists, the show aims to represent the United States’ ethical, conscious and moral spirit – its soul – through exhibits made by (and about) people who historically had less life, less liberty, and less wealth than their fellow white citizens.

Framing the show from 1963 to 1983, the curators were led by how artists of the time were responding to Martin Luther King’s mission and the rising, more militant black power movement. So the exhibition encompasses a wide variety of works of black subjects and/or created by black artists, from the depictions of protest and music in Roy DeCarava’s stunning black-and-white photographs (Mississippi Freedom Marcher, Washington, DC, and Coltrane on Soprano, New York, both 1963) to an afro-wearing, bespectacled brother crossing his arms against a grey background, as well as a red, white and blue frame in Barkley L Hendrick’s 1969 work Icon for My Man Superman (Superman Never Saved Any Black People – Bobby Seale).

In those two decades, people who were artists, activists, and both, did a great deal to mark blackness as an identity: the Black Panthers organised to stop police brutality, while also creating free breakfast and community medical programmes; Nina Simone released To Be Young, Gifted and Black; and Tommie Smith and John Carlos raised black power fists at the 1968 Olympics. And during these years, artists such as Lorraine O’Grady were asking: what is art, who is it for? Taking their work to the streets to insist, as William T Williams put it, that “art need not be in a temple”. Art could be everywhere.

In a white walled room of the Alexander Gray Gallery in New York, Melvin Edwards, now in his 80s, is remembering what it was like to be among the first African American sculptors to display large-scale works in such venues as Manhattan’s Whitney Museum of American Art. On the wall are three of his Lynch Fragments, a series of sculptures, decades in the making, that will feature in the Tate show.

Eeach Lynch Fragment is unique yet in conversation with the others. The small sculptures contain various recognisable items: a hammer, a link of chains, a knife blade. On their own, they convey a sense of dread but, when put together, the sense of violence is hugely amplified. Tate will show Some Bright Morning, a 1963 fragment named after an African American community that was threatened with the phrase: “If you people don’t behave, some bright morning we’re going to come and take care of you.”

While the protrusions conjure up images of enslavement, Edwards wants people to think beyond literal chains, since they only really existed symbolically. “Most slaves never were chained,” he says. “You’ve got 500 slaves and you’ve got to make a set of chains for each one? The owner wouldn’t have wanted to spend that much money. And they’re going to be able to do about a tenth of the work dragging these chains. They were restrained in other ways.”

Much of his work – like Curtain (for William and Pete) – is more abstract. When he was starting out, Edwards rejected how “the art world said ‘art for art’s sake’. I said no, art could be for any sake – and that doesn’t limit the experimental aspect of the way I work.” He dismisses the idea that abstraction was “new with Picasso” in the 20th century, because “humans have been using geometry, abstraction and direct representation” as long as we’ve walked the earth. Similarly, he says, “the black arts movement started whenever black people started” – a couple of hundred thousand years ago.

From the mahogany of Elizabeth Cattlett’s Black Unity fist to the screaming purples and pinks of Wadsworth Jarrel’s Revolutionary and the crisp, horrifying representations of mutilated black and white men, women and children in Faith Ringgold’s American People Series #20: Die, Soul of a Nation showcases the range of styles black artists of this era employed.

As Bull Connor sent in the dogs, little girls were blown up in a church, and Malcolm and Martin were assassinated, did black art need to directly and urgently respond? Could abstract work be relevant to a black America in crisis? Edwards never bought the idea that figurative paintings “might be dealing with the realities of the world” in a way that abstract work was not. He recalls creating the Smokehouse murals, a series of geometric murals made in neglected parts of Harlem, with William T Williams, Guy Ciarcia and Billy Rose. “We painted our work to change the place, not to put messages on the walls to tell people what’s wrong and what to change.”

Williams, his fellow muralist, was involved in many of the era’s great black moments. He marched on Washington with the 1199 healthcare workers union, because he was “from a generation of young optimists who believed that things could change, that organising was important, that collective voices were more important than a single voice”. He recalls this “great mass of humanity” and “the atmosphere of celebration even though it was a protest march”.

Emory Douglas, minister of culture for the Black Panthers, once said: “The ghetto itself is the gallery.” Williams put this idea into practice when he established the pioneering artist-in-residence programme at the Studio Museum in Harlem, with the idea of “an artist living in a community, using his or her skills or insights, inspiring young artists, being inspired by the community – and showing and creating in the community”.

All of which was perfectly captured in Lorraine O’Grady’s landmark 1983 work Art Is… , which stretched for seven miles through Harlem during the African American Day parade. She collected more than 400 photos of parade viewers being framed by gold frames held by participants, as well as views through a huge gold frame she’d mounted on a float – putting Harlem itself into focus as it passed by.

“The concept was that, as people were being framed, they were being acknowledged as art in themselves,” O’Grady says, in her studio in New York’s Westbeth artist community. She chose not to do Art Is… at the more flamboyant West Indian Day parade, as she wanted to show that black people in everyday dress – not just flamboyant costumes – were art.

O’Grady doesn’t have a strong relationship with the phrase black power. “All of these slogans,” she says, “are utopian phrases. There’s nothing wrong with them. They enable the kind of activity that has to take place for things to change. But the phrase didn’t indicate that there was real black power – except self-empowerment.”

Soul of a Nation will occupy 12 rooms, from Art in the Streets (which includes We Shall Survive Without a Doubt by Emory Douglas) to Black Heroes (which pairs Hendricks’ Superman with a red and green Andy Warhol silkscreen of Muhammad Ali). There will be an entire room dedicated to the Chicago-based collective AfriCOBRA, which stood for African Commune of Bad Relevant Artists. Keen for their work to be accessible, they made poster art designed for mass production.[5].

The first room, though, is dedicated to Spiral, an arts alliance that flourished in the early 1960s and consisted of one woman, Emma Amos, and 14 older men, all committed to using their talents in the cause of civil rights. “I think Spiral were announcing talent,” says O’Grady, whose work closes the show. “Black artists’ right to be heard. And my piece, Art Is, was much more about who art can be made by, who should be addressed by art, who should be participating both as audience and markers and evaluators of art.”

If Soul of a Nation begins at the moment the identity of “negro” gave way to “black”, it ends as “black” gives way to “African American” during the Reagan 80s – around the time Black Panther co-founder Bobby Seale began selling BBQs. But, as the show opens, black is back – because of the #BlackLivesMatter movement, and because of a rising sense of transnational blackness that cannot be contained by the nationalist identity of “African American”.

“One of the most incredible things about Black Lives Matter is how it represents the fruition of 50 years of ethnic scholarship,” says O’Grady. The artist herself wrote an influential work in the early 1990s, Olympia’s Maid: Reclaiming Black Female Subjectivity, which deals as an artist with similar issues Kimberle Crenshaw grappled with as a legal scholar in her now famous essay on intersectionality.

Soul of a Nation is clearly about race, but Williams hopes that visitors will take something more than that away with them. “I hope the viewer will see 65 different artists working in a time period, with different ideas and interests and technique – skilled at what they’re doing. I hope it gives them some sense of the history of the medium and the history of art in general.”

He goes on: “If it gives them some sense of what the soul of a nation is, that would be interesting. But that implies a bigger burden than just being members of a nation.”