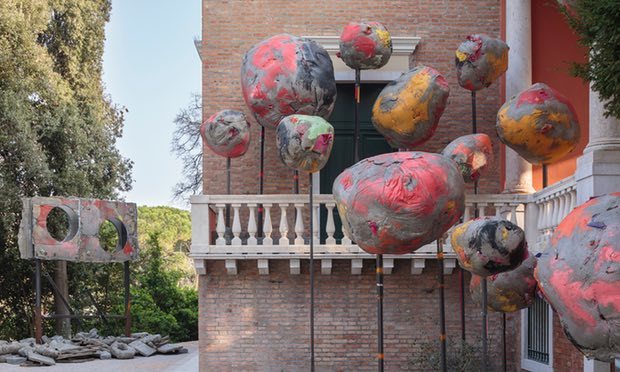 This article titled “Phyllida Barlow review – Venice invaded by loo rolls and brilliant buffoonery” was written by Adrian Searle, for theguardian.com on Tuesday 9th May 2017 12.13 UTC

Baubles greet the visitor to the British Pavilion at Venice. These misshapen lumps of concrete and cardboard around the steps of the building are like a very stupid horticultural border, or boulders wearing makeup. Phyllida Barlow’s decorative clods, both jolly and somehow ghastly, infest the pavilion’s portico, threatening to invade.

Related: Bish-bash-bosh: how Phyllida Barlow conquered the art world at 73

Barlow calls her exhibition Folly. Her work is all folly, often in a good way. Several other works are dotted about outside. One is a sort of raised advertising hoarding, with two yawning circular holes cut through it, like eyes. They gaze at you emptily, following you about.

A caustic, damaged and sometimes funny burlesque of sculptural ideas, the elements of Barlow’s Folly also crowd the pavilion’s six rooms, everything rendered in base materials: concrete and scrim, wire mesh, hewn chunks of polystyrene, polyurethane drool, paper and fabric, paint. They take the place of stone and steel. Anvils and pianos, ruined columns and balconies, giant spools of thread and megaphones: it is good that things can’t speak.

Everything looks like something else, but it is all Phyllida Barlow. Some elements remind me of Austrian sculptor Franz West, and of John Latham’s frangible suspended planets (both artists appear elsewhere, in the main exhibition of the 57th Venice Biennale). One might take Folly as a crowd of characters, inhabiting a world of stage-set columns, or pre-school models of a world not yet comprehended.

Theatricality rather than truth-to-materials is Barlow’s thing. Her work looks more brutalised than brutalist. It is a theatre of ruins, fragments, and flamboyant buffoonery. One thing she isn’t is precious. She parodies the muscle-bound self-regard of a previous generation of sculptors – if her stuff fell over it would still probably kill you, but it would be doing it for a laugh.

You have to sidle through the pavilion, between a forest of grey columns that reach for the skylights. These appear to be splitting lengthwise, fissured by unknown tremors. Grey, rounded boulders sit on the floor in a row. Some have wedges, like doorstops, preventing them rolling away. Others are piled on top of one another – child’s play or ancient ritual, who can tell. There’s an air of precariousness that gives the whole thing a lift.

Like a huge scenery flat that has toppled and wedged itself at an angle, a wall of paint-sutured panels divides one of the side rooms. Things dangle off it, like stuff on a gibbet. There is a sense of action interrupted, an idea suspended and dangling in space. Elsewhere, an anvil balances, impossibly, on a pile of pallets and boards, teetering on the edge of catastrophe.

High on an interior wall, overlooking the canal outside, sits a rough balcony. It awaits an overwrought opera diva who will never arrive, presenting us with the possibility of a performance. Beyond the window, does her Romeo await? I imagine him hiding out on the pavilion’s rear decking behind some objects derived from funfair carousel chairs, though they might equally be the remains of a street pissoir or crowd-control barrier.

“Venice is probably too crowded,” writes Barlow in her diary notes in the catalogue for Folly. She means her installation, not the city, though both are true. Barlow writes extremely well, and candidly, of the problems of being a sculptor now. There’s a lot of laceration, doubt, irritation and remorse in her writing, and in her sculpture too. She fights with her recalcitrant materials, she argues with her sculptures, she rams them into the world and fights some more. Hers is an art of pleasure and complaint. Then I come across a huge dumb wheel, with a giant cardboard tube for an axle. I’m reminded of a loo roll.

Sharpened stone shards come threatening through a wall. A skeletal megaphone rests on an arrangment of spars. An upturned cardboard box caps a sheave of red posts. Another red sculpture nearby is a distorted bobbin of thread. In their way, these are personages. You expect them to start moving, jerkily, as in a stop-frame animation.

Looking at Barlow is a game of associations, played out with bulk, heft, the appearance of solidity, mass and weight. I was expecting something more unified than this accumulation of discrete sculptures – 22 in all. Can they exist apart, or are we meant to take them as an ensemble? I would have liked more of a dramatic and spare use of the spaces in between, more room to breathe.

But that’s what I want, rather than what the artist wants. Compared to some other solo presentations at this Biennale, Barlow’s Folly harks back to a kind of sculpture-making, and a sense of physical, tactile presence, that belongs to a different time. This makes Barlow stand out. Her difficulty is in many ways her strength. But sometimes a folly needs a foil. In the end, I have the feeling her sculptures are pushing me aside, bearing down and acting like they don’t need me. Among them, I feel unnecessary, like a tourist among ruins, an actor without a role.