We caught up with English artist Paul Benney just ahead of the opening of his major exhibition in Venice.

Speaking in Tongues depicts some of your contemporaries in the setting of a Pentecostal feast. When you enter the exhibition space, you hear murmuring, and as you move around the room, you realise the murmurs are actually deeply personal confessions by your subjects in the paintings. This effect is created with holosonic technology. What made you decide to use this specific technology and what purpose is it serving for the work?

The work doesn’t specifically depict a feast or even the Pentecost, rather it references both and Goya’s ‘Lunatics in the Yard’. The sound effects result in a tangible sense of being spoken to as if in a dream or that the sounds actually originate within your own head rather than being projected from speakers. This is a very new sound focusing technology that perfectly matches the challenge I set myself of creating a convincing ‘holographic’ sound environment.

The effect created differs from a regular sound installation- can you tell us how? Can you tell us more about ‘speaking in tongues’ and the connection with the supernatural?

My hope is that as you confront the work that there is a strong sense of the supernatural or a least an ambiguity as to how the various light effects in the painting and the sound effects are achieved. This can result in the viewer feeling a little disorientated and perhaps a little more receptive to the underlying metaphors that speak to the shared concepts of the transformative qualities of light and tempering qualities fire.

How do you feel the exhibition space of the church affects the presentation of your work?

Churches generally as sacred spaces have a sense of reverence about them. This is something that can greatly enhance the experience of regarding artworks.

You have a second exhibition at the Hotel Metropole (8 May- 2 July), how does the work you are presenting tie in with Speaking in Tongues?

The work at the Metropole deals with the disconnect between the current hide bound orthodox teachings of the church and the original and authentic moments of revelation that actually engender the birth of established religions.

Paul Benney has worked as an artist and musician in both the U.S. and U.K. and is represented in public collections world wide including The Metropolitan Museum of Art, The National Gallery of Australia, The National Portrait Gallery, The Royal Collection, The Eli Broad Foundation, AIG Houston, and Standard Life. Benney has twice won the public choice award in the BP Portrait Awards and has been short listed on two occasions. In 2013 he was invited to be one of the judges for the Threadneedle prize at the Mall Galleries. A member of the Neo-Expressionist group of the early 80’s in New York’s East Village, Benney became known for his depictions of stygian themes and dark nights of the soul. Also one of the country’s leading portrait artists, he has painted many prominent cultural and political figures. 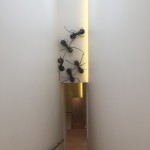 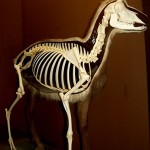