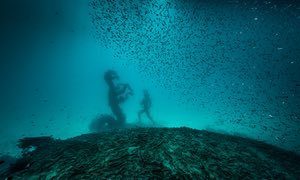 This article titled “Damien Hirst stakes all on his Venice treasure comeback show” was written by Sarah Hughes, for The Observer on Sunday 26th March 2017 08.00 UTC

Two Venetian museums, the Palazzo Grassi and the Punta della Dogana, will fling open their doors in a fortnight and allow visitors to view one of the most tightly guarded art exhibitions of recent years.

Treasures from the Wreck of the Unbelievable is the first new exhibition of works by Damien Hirst since 2014’s indifferently received Schizophrenogenesis – and the stakes couldn’t be higher for British art’s jester king.

In recent years, Hirst’s once gilded reputation has taken something of a battering. Although the 2012 retrospective at Tate Modern was rapturously received, bringing with it a renewed reminder of the power of early works such as The Physical Impossibility of Death in the Mind of Someone Living and Mother and Child, Divided, recent exhibitions have been panned – Schizophrenogenesis was condemned for coasting on past glory, while 2012’s painting-focused Two Weeks, One Summer received scathing one-star reviews – and there is a nagging sense that these days his art can resemble a factory production line, with endless copies of his popular “spot” paintings churned out in the name of brand recognition.

All of which makes his decision to open an exhibition of this scale in Venice during the Biennale a particularly bold one. “To do a show in arguably one of the most extraordinary artistic settings at a time when Venice will be the focus of collectors and critics – it’s like a musician deciding to make his long-awaited comeback at Wembley Stadium,” says Oliver Barker, chairman for Europe at Sotheby’s and the man who orchestrated Hirst’s notorious 2008 auction Beautiful Inside My Mind Forever.

Treasures “taps into a desire for belief, for a connection with the past,” Hirst told FT Magazine this weekend. “What’s unknown is how it will be perceived, but maybe I am worrying more than is necessary, really, because people are willing to believe. I think they want to believe.”

Hirst is “facing his critics head on, not running to the hills,” Barker says. He is also, as is so often the case with Hirst, already attracting controversy. Earlier this month, the animal rights group Animalisti dumped 40kg of dung outside the Palazzo Grassi, along with the message “Damien Hirst Go Home! Check Out This Work of Art! 100% Animalisti!”. The dung was a protest against the way in which Hirst has used animals in his previous artworks. Everyone connected with the new exhibition has stressed that no animals feature.

Meanwhile, the levels of excitement surrounding the shrouded-in-secrecy Treasures continue to grow. “I am ready to believe,” wrote the Guardian’s art critic Jonathan Jones after a teaser image showing mysterious images floating through an underwater kingdom was released. He was not alone – within the art world many are suggesting that this show, five years in the making, will not only repair Hirst’s reputation but bolster it, reminding critics and art lovers why this British artist once thrilled the world.

“I can’t say much but what I will say is that [Treasures] is quite extraordinary and will astonish a lot of people,” says James Fox, the journalist who has spent the last few years working with Hirst on an autobiography due to be released in the near future (as with many things the secretive Hirst is involved in, there is no date as yet). “I’ve never seen such an ambitious and impressive show from one artist. It’s startling.”

In Italy, expectation levels are equally high. “It is highly anticipated, particularly because the artist has not had a big personal exhibition in this country since 2004,” said Martin Bethenod, chief executive and director of the Palazzo Grassi and the Punta della Dogana. “Damien Hirst is not only the most prominent personality of the YBA moment, he is also the one who has the most extraordinary ability to challenge and renew himself and I believe that Treasures from the Wreck of the Unbelievable will live up to the curiosity surrounding it.”

But what exactly can visitors expect? Hirst’s company Science Ltd remained tight-lipped, but there have been some tantalising clues, most notably a piece in the Financial Times yesterday in which journalist Catherine Mayer wrote of her time accompanying divers retrieving sunken treasure off the seabed of the Indian Ocean. These treasures were supposedly part of the hoard of the Apistos, a ship that apparently sank back in the first or second century AD.

As always with Hirst, however, nothing is that simple and Mayer’s piece tells how the Apistos or “Unbelievable” is a myth, a story passed down to sailors through the centuries. As to whether the treasures on display in the Venetian museums are real or created – Hirst’s response to her was a simple: “Myth or fact … whatever you choose to believe.”

The thing about Damien is that whatever happens you should never write him off.

What can be said, though, is that the exhibition will feature 189 pieces and, according to Mayer’s article, will continue the 51-year-old artist’s lifelong obsession with both the ocean and the blurring of fact and legend, fiction and reality, creation and myth. “Damien’s almost like a great band in a way,” says Barker. “He arrived with a bang and because of that people tend to measure his work by the noise he first made. But he’s in his early 50s now and more reflective. I think what we’ll see in Venice is a compounding of his creative consistency. He’s been at the top for a very long time and people sometimes forget that.”

His critics claim that longevity has bred a kind of contempt, arguing that Hirst is too cushioned by money and its comforts truly to astound as he did in the 90s. Certainly it didn’t help that the 2008 Sotheby’s event, in which he bypassed galleries to sell directly through auction, reputedly netting upwards of £111m, occurred the day that Lehman Brothers collapsed, coming retrospectively to seem like the last gasp of a gaudy and played-out culture.

“There was a recession in the art business, a sense that the exuberance of 2005 to 2008 slowed down without stopping completely,” says Barker. “And in times of recession, a slight conservatism comes into play, meaning that we sell more dead or well-established artists. Where Damien is concerned I think he’s always been far too smart and brave to worry much about fashion or trends. He’s always looking forward – and I’d say that the fact he’s invested so much creative and financial capital in this new work is a reminder that he believes in it.”

Treasures from the Wreck of the Unbelievable could then be seen as a powerful riposte to his critics, a large-scale demonstration that neither Hirst nor the Young British Artists movement with which he was so associated, is a busted flush.

“From what I’ve seen there’s a whole storyline behind this work which takes it to another level of creativity,” says Barker. “It’s a terrific commentary of the way in which we’ve all consumed civilization and culture and one which addresses his own role as an artist in the litany of great artists in an incredibly exciting way.”

Fox agrees. “There is a sense that many people both inside and outside the art world have found it impossible to swallow the fact that he’s been both so successful and so productive. In a way that’s because the money comes into and colours the story. Serious people within the art world take him very seriously however – I was talking to Nicholas Serota [out-going director of the Tate museums and galleries] about the new exhibition and he said the thing about Damien is that whatever happens you should never write him off.”