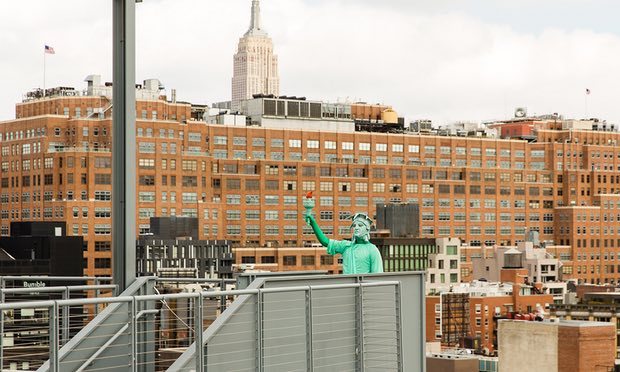 It came a day before the opening of the Whitney Biennial – the longest-running survey of American art – casting a gloomy shadow on a group exhibition that explores the topic of funding, or its lack thereof.

The 63 artists on view are co-curated by Mia Locks and Christopher Y Lew, who want to mirror this bleak era. “This biennial arrives at a time rife with racial tensions, economic inequities and polarizing politics,” they write in the introductory statement, “inviting us to pause and pose questions in a tumultuous world.”

It’s a politically charged show on the state of America but without the predictable satire. Rather, this exhibition feels like a graveyard of the establishment’s broken promises with glimmers of hope from some of its suffering citizens.

In light of arts funding cuts, the art collective Occupy Museums, which was formed in 2011 alongside Occupy Wall Street, has created a mini group show in the biennial called Debtfair. The works of 30 artists are grouped by the corporations they are in debt to: JPMorgan Chase, Navient and the FirstBank of Puerto Rico. The artworks can be bought for the artist’s monthly debt charge.

What about art education, you ask? Puerto Rican artist and activist Chemi Rosado-Seijo took all the desks and chairs from a classroom from the Lower Manhattan Arts Academy and put the class inside the museum. The piece, called Salón Sala Salón, brings the high school art students to the museum for a weekly workshop, showing the importance the creative arts education in a time when its meaning is being diminished.

The arts aren’t the only sector suffering funding cuts – the budget proposal wipes out thousands of jobs in health, science and social programs. New York artist Cameron Rowland’s piece Public Money shows one alternative form of funding that could pave the way for the future, social impact bonds. “The purpose is to gain a more intimate understanding of how they work,” he said. “So few people know they exist, let alone how they work, which is something that is crucial at this moment.”

While there are no Trump portraits or American flags, there is a Statue of Liberty standing outside in below-zero weather. The performance, called Liberté (Liberty), has a performer holding up an unlit torch. It was created by art group Puppies Puppies, who are selling foam Liberty Island crowns downstairs in the gift shop for $5, debunking the myth that high art has to be expensive (and inaccessible).

Even with holdups at airports and the looming Muslim ban, other pieces dig into the refugee crisis, such as The Island, a film by Vietnamese artist Tuan Andrew Nguyen. Shot on the Malaysian island of Bidong, a former Vietnam war refugee camp, it mirrors the present refugee crisis at a time when millions of Syrian refugees have fled their homeland. While the small island accommodated 250,000 people from the 1970s to the time it shut down in 1991, America will accept no more than 50,000 refugees this year after screening each one under a microscope.

During the presidential campaign, Melania Trump was called out for copying and pasting parts of Michelle Obama’s speech. Here, there is also a plagiarism spat. On Instagram, Toronto artist Maya Ben David claimed that a sculpture in the biennial by Ajay Kurian looks too similar to a character she created called Mary Jane Anthro Plane, which is featured in her video art piece MBD: Origin Story, which was shown in a gallery last year. Kurian’s sculpture, which is part of a series he called Childermass, features a figure with a red wig and a white mask, just like David’s. “The sculpture in the Whitney not only resembles my character with an airplane mask and red hair, but she is wearing layered shirts and sneakers just like in my work,” said Ben David. “I would like an apology from the artist and curators at the Whitney Museum and recognition that the character Mary Jane Anthro Plane is my creation.” An email sent to Kurian’s gallerist was not answered at the time of publishing this story.

It feels like many people are being sold short, and it isn’t just Trump’s budget cuts to the arts. While his proposed Mexico-US border wall will cost billions, the current border is a point of inspiration in the show. Mexican artist Raúl de Nieves’s Technicolor stained glass wall reads Hope, while the Postcommodity art collective created a video that follows the rusty metal fence that currently divides Douglas, Arizona, and Agua Prieta, Mexico. “The border continues to mystify the American public during this administration, as it did before Trump entered,” said Postcommodity artist Cristobal Martinez, who refers to their piece as “a metaphor for the imprisonment caused by the polarizing bipartisan discourse”.