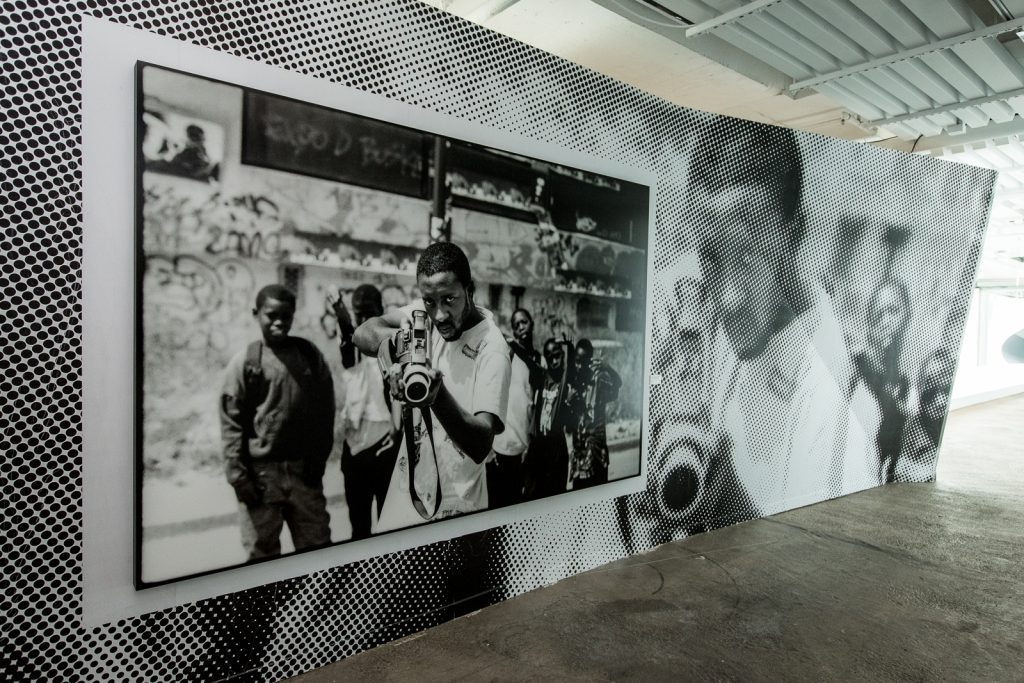 Celebrated French artist JR is subject of a major retrospective which has just opened today (March 9th) in Qatar held by Qatar Museums at QM Gallery Katara in Doha running until 31st May 2017.

JR is amongst a handful of world-renowned artists who combine art and engaged actions through large-scale outdoor installations, films, photographs and videos, using the streetscape as his canvas and his inspiration, which he claims as the largest art gallery in the world. JR creates “Pervasive Art” that spreads uninvited on the buildings and slums around Paris, on the walls in the Middle East, on the broken bridges in Africa or the favelas in Brazil. He remains anonymous and doesn’t explain his work, allowing the subjects, protagonists, spectators and passers- by to raise their own questions. JR Répertoire features some of the key series that have made the artist famous around the world as well as a video lounge where selected video works can be viewed. 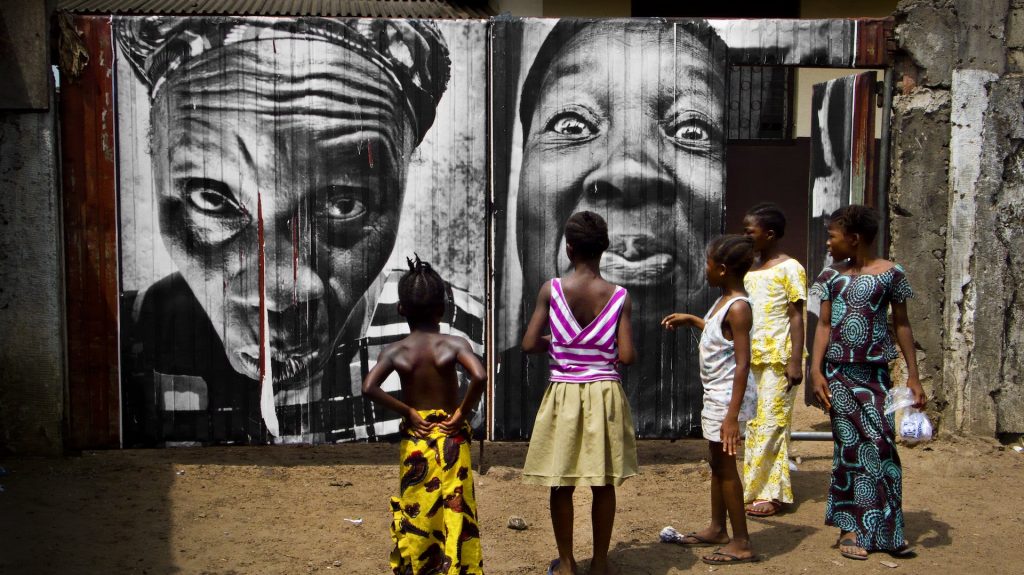 Among his best-known projects are: Face 2 Face (2007) As part of his long running international campaign, Portrait of a Generation, JR illegally pasted on both sides of the separation wall and in several Palestinian and Israeli cities with large portraits of ordinary citizens with the same occupation of both ethnicities and religions, forcing the viewer to question who each individual person was and whether a difference could be made. Women Are Heroes (2008) A project that showcased poignant and powerful portraits of physical and emotional survival amidst atrocity, documenting the dignity of women in conflict zones and violent environments. 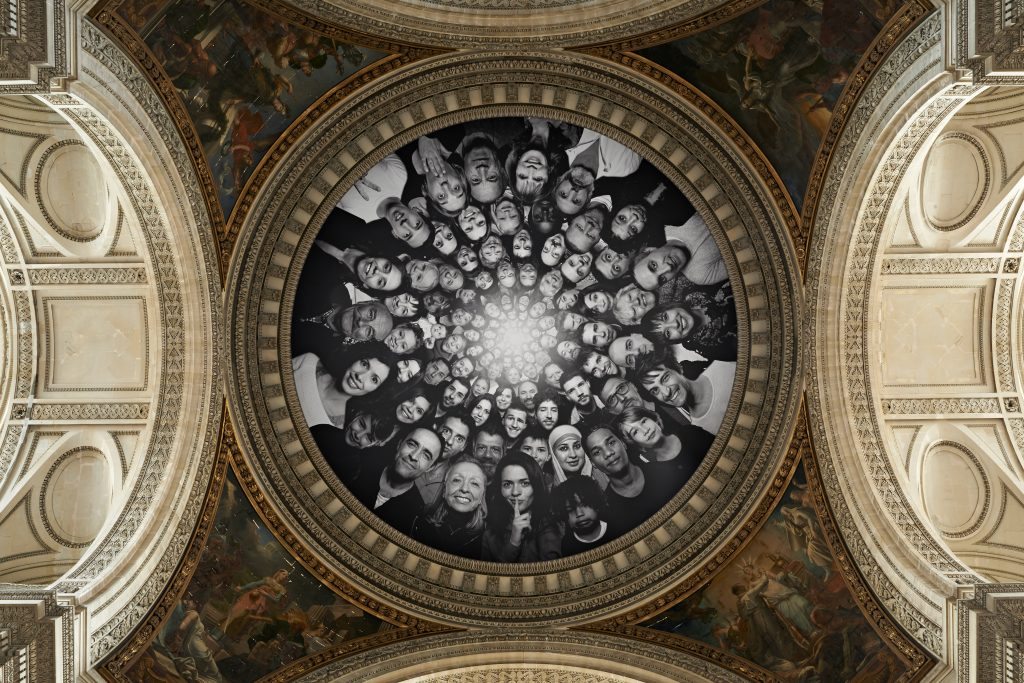 The Inside Out Project (2011) Launched in March 2011 at the TED Conference in California, JR called for the creation of a global art project in which everyone could participate – the Inside Out Project – inspired by his large-format street “pastings”. Individuals and groups from all over the world could take part, using photographic portraits to share the untold stories and images of people in their communities within more than 130 countries from now on. 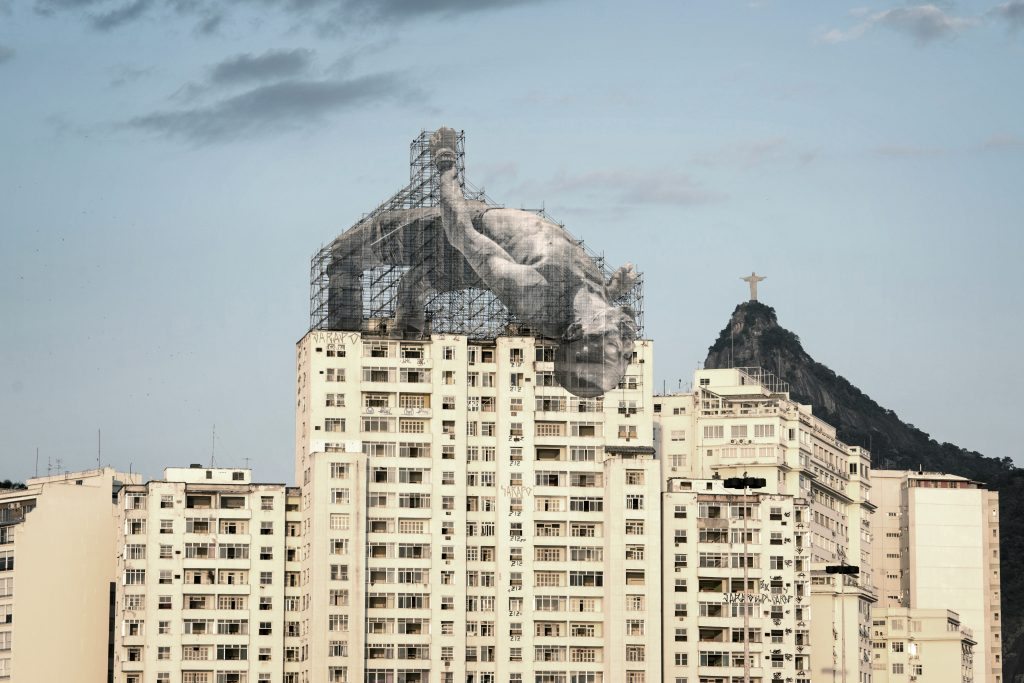 View of JR’s Giants in Rio de Janeiro for the 2016 Olympic Games © JR-ART.NET

Ellis (2015) A film directed by JR, starring Academy Award winning actor Robert de Niro, set in the abandoned Ellis Island Hospital complex and using JR’s Unframed art installations, telling the forgotten story of the immigrants who built America. Rio de Janeiro Olympic Games (2016) Describing it as his ‘craziest’ project yet, JR covered the streets of Rio with giant art installations representing Olympic athletes, each turning the city into their own personal playgrounds. The Louvre, Paris (2016) JR was invited by the Louvre to transform one of the most recognisable aspects of the world- renowned museum: making the famous pyramid ‘disappear’ in plain sight through a spectacular anamorphosis, an illusion that covered the entire structure. Among his other recent projects are an exhibition dedicated to children at Centre Pompidou in Paris; a permanent collaboration with Brazilian artist Os Gemeos in the hidden underground tunnels of the Palais de Tokyo in Paris, and a documentary film co-directed with Nouvelle Vague icon Agnes Varda, travelling around France to meet people and discuss their visions. 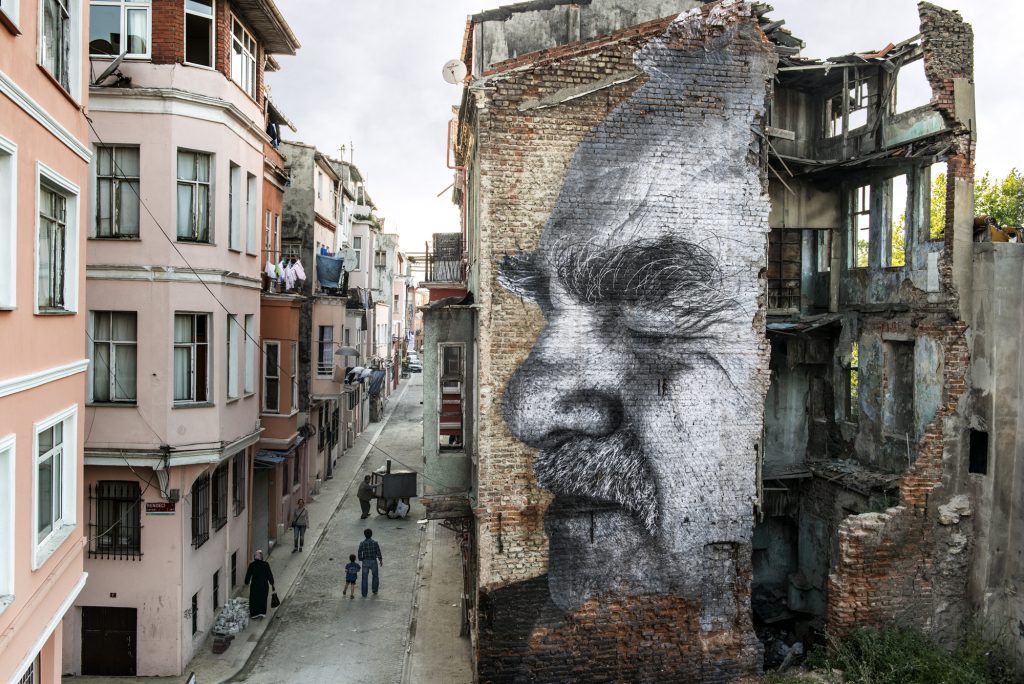 About The Artist
Born in France in 1983, JR is based in Paris and New York. Beginning his artistic career at the age of 17, JR joined the Galerie Perrotin in 2011. Since then, JR creates monumental photographs that he pastes around the world, infiltrating in urban life anonymous portraits, witnesses of the present and the past. He received the prestigious TED Prize in 2011 that offered him to make a “wish to change the world”. JR exhibits freely in the streets of the world, catching the attention of people who are not typical museum visitors. People who often live with the bare minimum discover something absolutely unnecessary. And they don’t just see it, they make it. Some elderly women become models for a day; some kids turn artists for a week. In that Art scene, there is no stage to separate the actors from the spectators. This exhibition at QM Gallery Katara is made in collaboration with Galerie Perrotin. Solo shows of JR’s work have been exhibited in galleries and museums worldwide, including The Rath Museum in Geneva (Switzerland), Tokyo’s Watari Museum (Japan), The Contemporary Art Museum in Dallas (USA), The Contemporary Arts Center in Cincinnati (USA), the Museum Frieder Burda, Baden-Baden (Germany), Power Station of Arts in Shanghai (China), and “Au Panthéon”, Paris (France) a monumental installation surrounds the drum of the Pantheon’s dome until the end of its renovation.