A solo presentation by painter John Stark is the latest exhibition at Charlie Smith Gallery. Entitled DoL Po the show is a series of linked ideas ranging from the waning need for manual labour and bees to warfare. The works are beautifully crafted and presented in a way that allows the broad range of ideas to come forward, rather like a spider’s web of connected concepts that stretches across the green-walled space of the gallery. One painting that stands out in the exhibition is ‘Workers Hammer’ which raises questions around the use of tools, museum collections and the holocaust. Within this painting a bone, which in the early days of the human race would also have been used as a tool, is engraved with a code. This code refers to methods used in the early years of collection, where items where often defaced for the supposed benefit of museums’ numbering system. However, it also recalls images that surround the Holocaust. 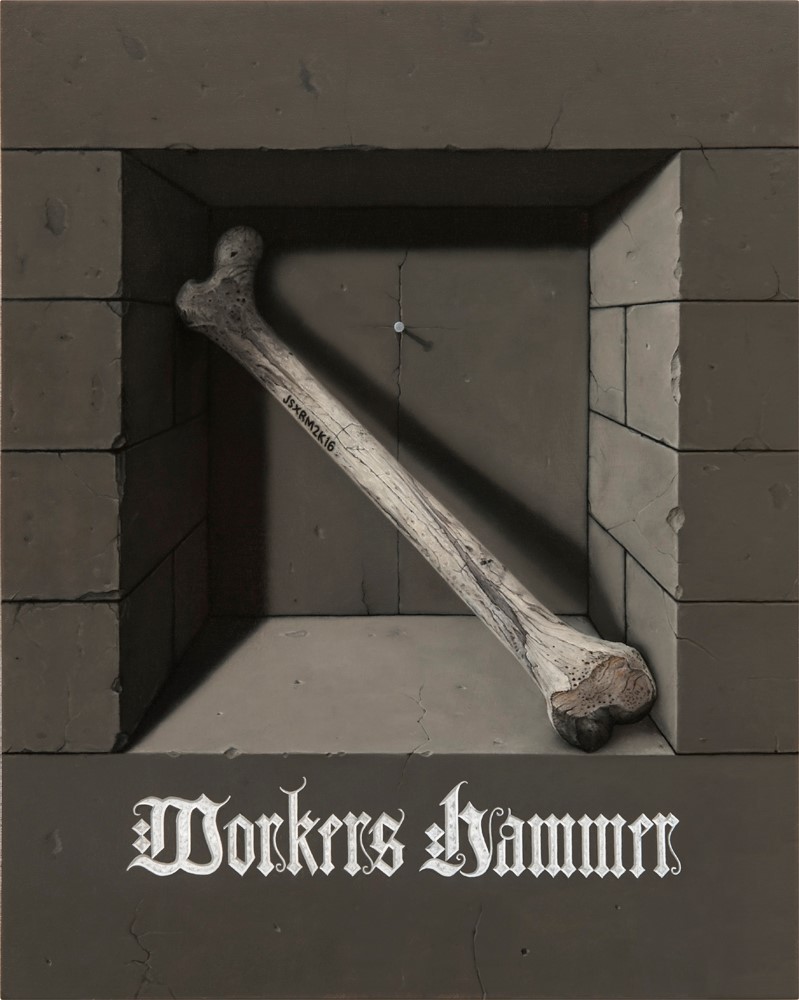 I met with gallery director Zavier Ellis to discuss the works in DoL Po and his other curatorial activities. We focused on the painting ‘Wage War’ in particular, analysing its contents:

Stark’s paintings have been described as an ideological battleground. Can you explain more about this?

I think the idea with John’s work is that he is very much interested in setting up oppositions. He’s very interested in the mythological. He has made series about mythology and then he’s moved onto witchcraft, which became Witchcraft and Warfare. He’s made series about alchemy, religion and spirituality run through his work. Recently, the work has become more political. That’s where you get the idea of the ideological battleground.

For example the beekeepers, really highlights this, in terms of the way that the interest has developed. Originally the idea started from looking at a beekeeper drawing by Bruegel and historically he’s used mythology, using figures like prophets and monks, which became alchemists and then the beekeepers came along. Really the beekeepers are signifiers for all those things. They’re Beekeepers, but they’re also alchemists and monks. Within the idea of beekeeping and the culture you have communalism. This is twofold: you have the community of the bees and the community of the Beekeepers themselves. John became very interested in utilitarianism and labour in the more historical sense, manual labour. That led to an interest in the ideas behind the change and development of labour and how you go from the manual to the technological and robotic. Where is the human’s place within that? He got onto the idea of division of labour and you have that with the beekeeping community as well. The bees are an instinctive labour force, making honey. The idea of the queen bee and the drones has led onto the drone painting. As you can see in ‘Wage War’ in particular, you’ve got the idea of making war but also an ideological sense of a wage war. Within this piece, the Beekeepers are now wearing camouflage; they’ve got these bright gloves that might refer to his nuclear paintings. 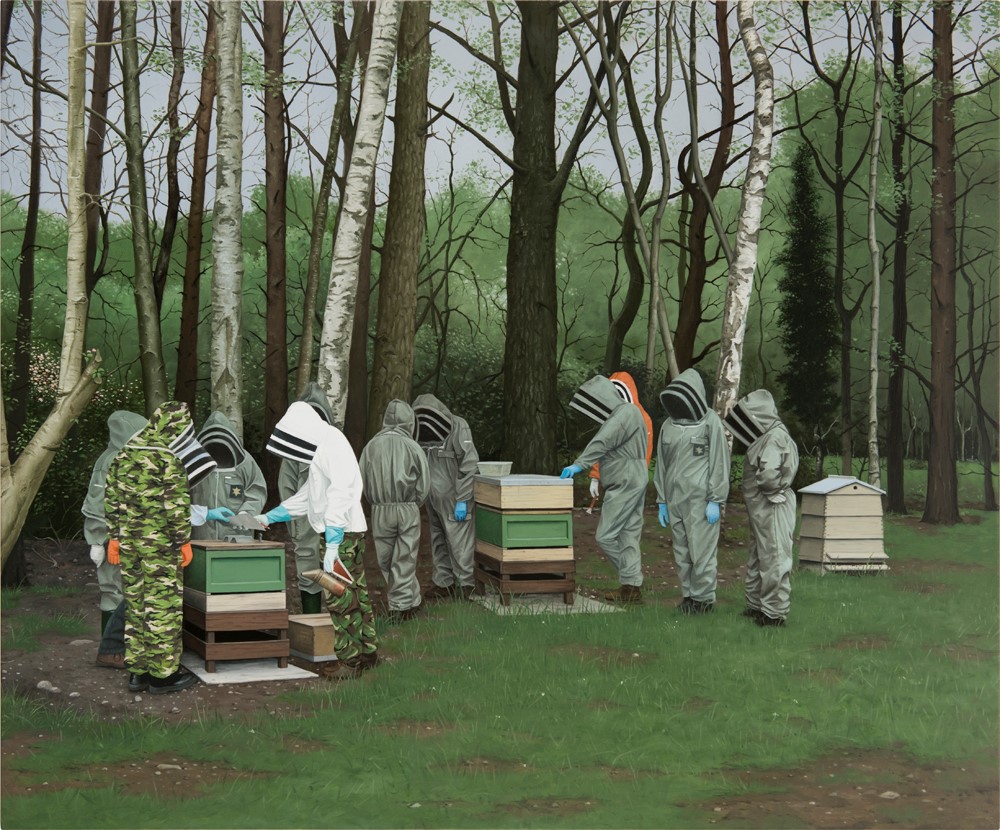 They’ve got stars on, which visually refers to the holocaust. Could this link with the other painting [‘Worker’s Hammer’]?

I think it does but it’s open though. The stars are another type of branding, which also runs through the show and leads more to ideas about commerce, value and means of exchange, which are the central ideas of the show. They might also be Masonic or they could be a religious cult group. I always get the sense in these paintings that there is some kind of experimentation going on, which makes me think of Nazi Germany. As you suggest it could be related to ‘Workers Hammer’, which again is branded, but in a different way.

The drone painting leads on from that with links to beekeeping, the military and ways of seeing, through the use of the viewfinder. You have a person driving a truck, which is towing the drone, but then of course the drone is unmanned, so it’s goes back to the idea of science, technology and how the place of the person has been replaced by technology. 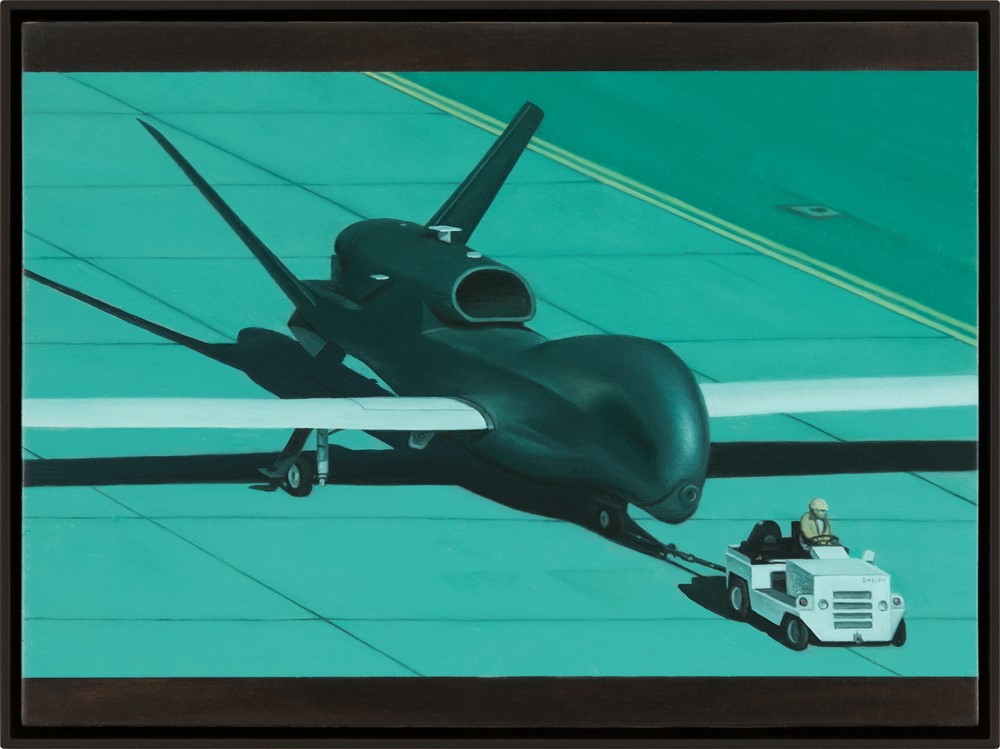 There’s also a loss of skill there, because it takes more skill to fly an aircraft that it does to drive a truck…

Yes that’s very true. That leads to depersonalization, which leads back to the division of labour and the shows title DoL Po. This refers to the division of labour (DoL) and Edward de Bono’s theory around lateral thinking, Provocation Operation (Po). Around the frame of the painting there is also a reference to the material that the drone would be made out of, so it’s treated in this metallic way.

There’s a reference to the cinematic here as well, with the framing using aspect radio as a ploy on the canvas itself…

Yeah, the cinematic, the photographic, the idea of using the Internet for images, accessibility of images, which of course has changed so much. We all take this for granted now, but it wasn’t around 20 years ago, not like it is now. That’s one of the oppositions that John sets up in his work because in many of them there is a direct reference to historical and old master painting, but then you’ll have modern ways of finding images and contemporary or futuristic subject matter.

You regularly run an open call called Anthology. How did this start and are you looking for any particular kind of work?

I have a lot of artists, like I’m sure every gallerist the does, sending in images and asking how they could be shown or represented. One doesn’t have the time to go through everything, it’s just not possible. The Anthology show is a democratic open call, there’s only one restriction and that’s the physicality of the gallery. We have to be able to get the piece up the stairs and through the door. That’s the only limitation. It’s open to all nationalities, all types of medium, all age groups and levels. That means that I have to sit down every year and look through a bunch of applicants. The number of applicants has risen every year, last year we had over 900. I, and my jury, have to look at those images. I would recommend to any artist that wants to get some exposure to apply to good open call shows not just mine but others, including John Moores. We may have critics and curators on the jury and they might curate artists into show. The artist might not even get into Anthology, but they might get into other shows, or they might get bought by collectors. Of course, there’s no way it’s guaranteed. As a result of people going for Anthology, people have sold work to Saatchi and I now represent some of the finalists. It can be a really big success. I have my taste of course, as a show we don’t look for anything in particular. 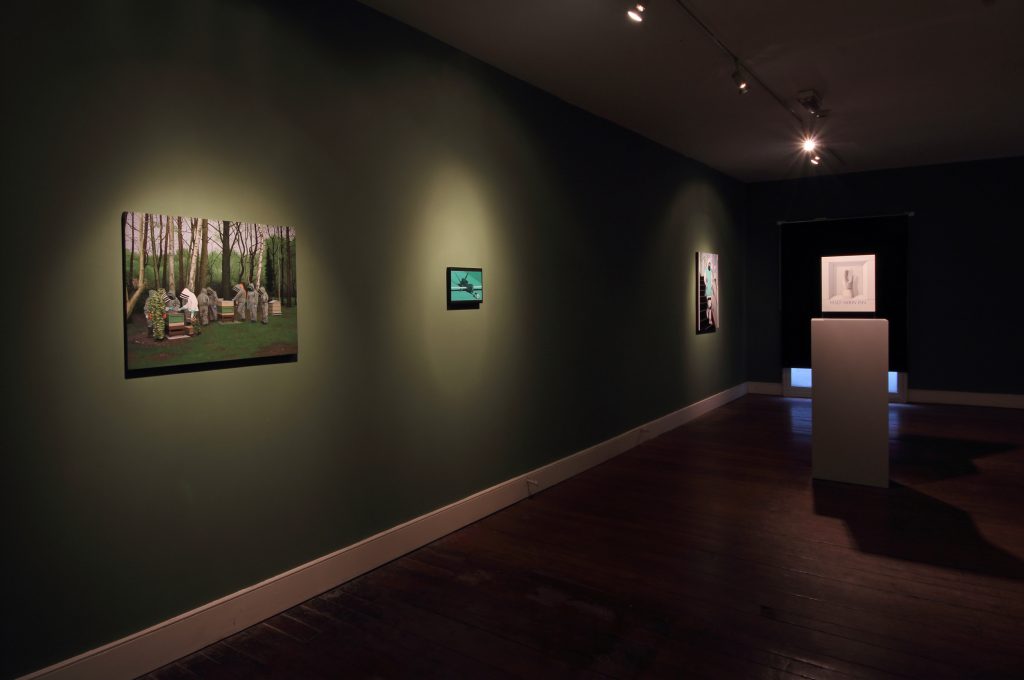 As well as running Charlie Smith Gallery you also curate the Future Can Wait, can you explain how this started?

I run that in partnership with Simon Rumley, who is a film director in his day job, but also a curator and collector. Over ten years ago now, he noticed that there were gallerists and curators who were working with as core group of artists. He figured that we must have something in common and called a meeting, just to talk. Maybe we could do something, all the others gradually fell by the wayside and it was apparent that Simon and I would work together. I had always had an idea about doing a really big curated show that pretty much takes the best parts of the art fair model and strategies, putting it on for a week and being really large scale, but curated. So that the artists weren’t penned into a booth, not that I am denigrating art fairs, but taking some of those strategies and using them in a curated sense to show to work of better. We just wanted to do something really big and spectacular, something that people weren’t really doing. We decided to make it London focused out of practically more than anything else. It’s London based and or London educated artists and we’ve had few international guest artists. We’ve run it for nine years in a row. As far as I know it’s the biggest, longest running show of its kind.

Catch it while you can! John Stark: DoL Po is at Charlie Smith Gallery until 25th June. 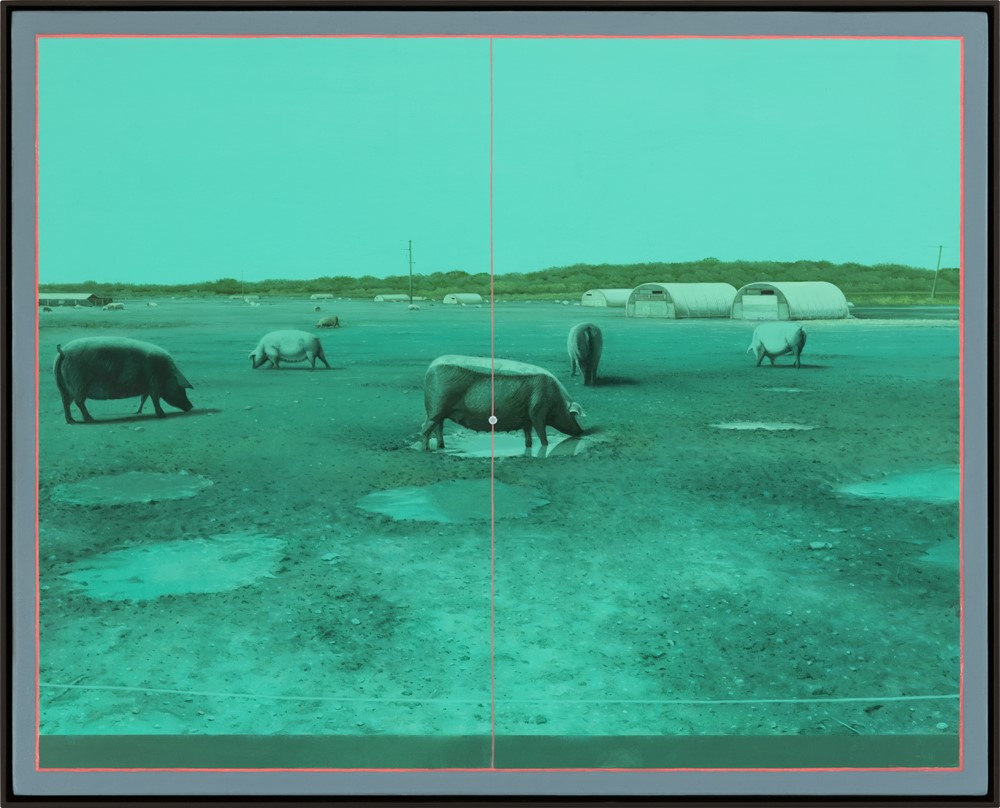